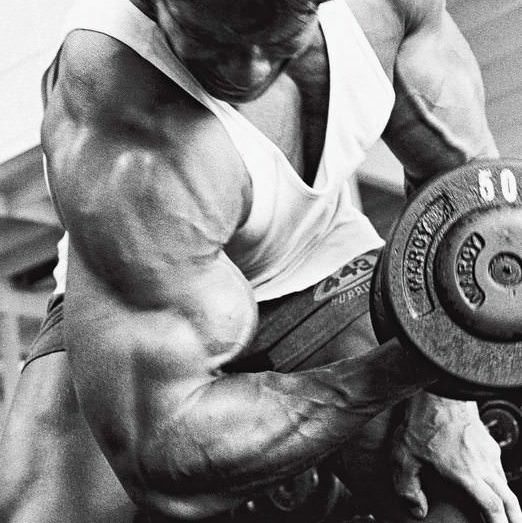 Of all the grueling arm workouts that Arnold Schwarzenegger subjected himself to, one stands out above the rest.

EVEN BY TODAY’S  standards, Arnold Schwarzenegger’s arms at their peak, impressive. arms stretching the tape to two feet, they were his one knockout punches in his seven Olympia victories, punctuating at was also, head to ts time.

Speaking of peak, his biceps had plenty - his right one in particular, which he cannily displayed more often than his left. His triceps, while perhaps slightly less imposing than his biceps, showed a remarkably full horseshoe when at his sides and in his signature sidearm pose. Sometimes maligned for his forearm development, Arnold’s lower arm limbs actually complemented his uppers perfectly, and while they may not have impressed in repose, they jumped to life when he hit his biceps shots, seeming to double in thickness and vascularity.

Over the past five decades, the question has been asked: “How can I get my arms to look like Arnold’s?” In shfort, you can’t. Just as you were born with your own unique set of genetic attributes, so was Arnold, and among his was the DNA for a stunning set of pipes. But you can follow the routine that he used to get his up to 22 inches. It’s founded on principles Arnold read about in this very magazine when he was cutting his teeth in  the gym. Just as his idol, Reg Park, influenced the training of young Arnold, so, too, can you follow the formula that worked so well for the Austrian Oak. It’s based on tried-and-true techniques that have been serving the bodybuilding community since Day 1. And that’s what we have here: a 42-set of nuts-and-bolts moves with a high-intensity barrage that annihilated, and consequently grew, the biceps, triceps, and forearms of the man many label the best bodybuilder the world has ever seen.

The workout we selected is a precontest routine (as opposed to an off-season program) that Arnold used during his bodybuilding heyday. His arm training can be broken down and discussed in terms of macro principles (sets, reps, and any other non-exercise-specific practices) and micro principles (specific exercise technique). First, the macros:

Arnold was a proponent of supersetting biceps and triceps, just as he did with chest and back. Going into a competition he wanted to achieve a maximal pump during each workout and, as he once put it, “zoom in on chiseling in all the cuts and shape possible.” Supersetting provided him that opportunity. Off-season, he often trained bi’s and tri’s individually with straight sets, even if he did them in the same workout.

Arnold did slightly fewer total sets and used higher reps for arms precontest. Off-season biceps or triceps workouts might feature four exercises with five to six sets of six to eight reps each. His precontest routine still includes four exercises but with four sets of eight to 10 reps. He also cut rest periods to a minimum; he didn’t rest during supersets and often wouldn’t even rest between supersets.

In the off-season, when maximum size was his goal, Arnold would typically train arms twice a week. Precontest, this was bumped up to three days a week, again to fully pump and define the arms. This essentially negated the lower volume he used in each workout.