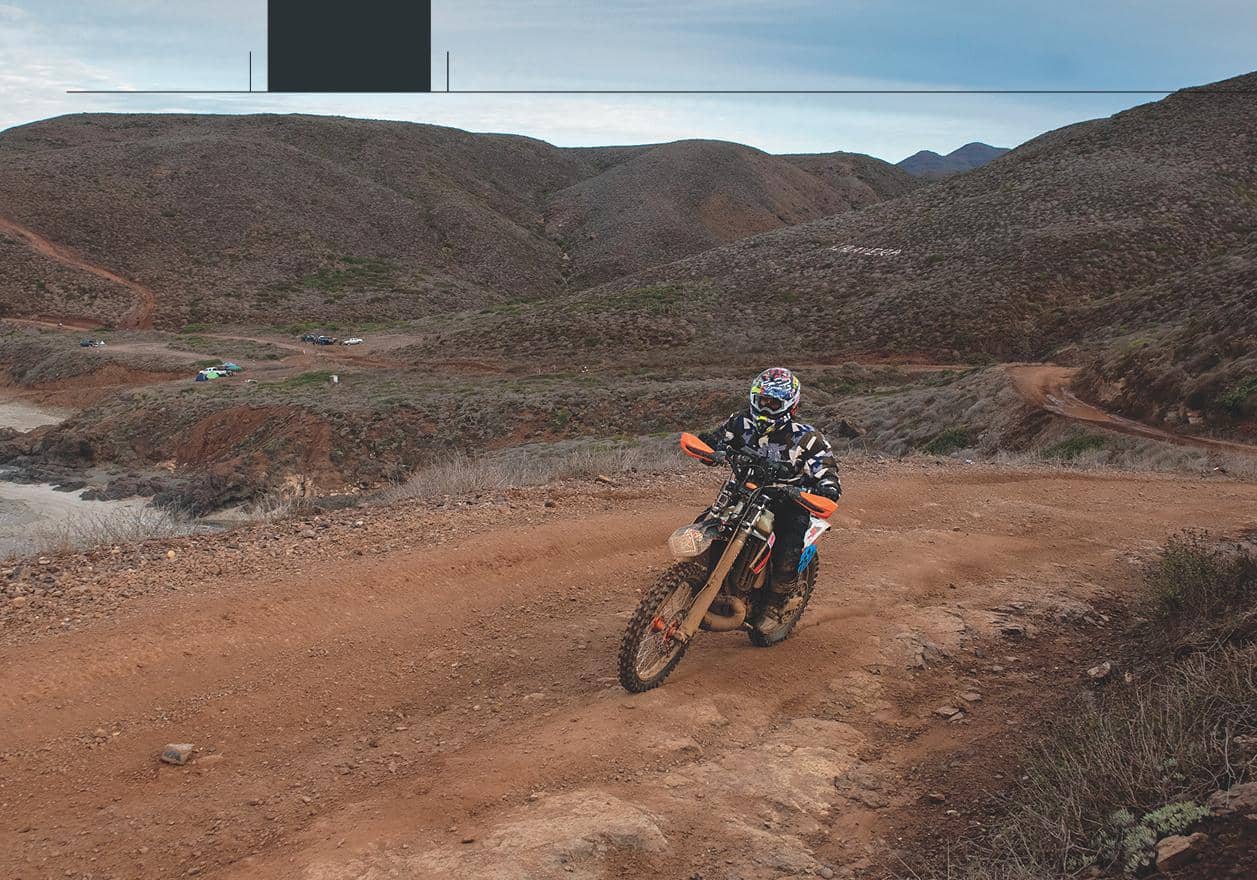 The Baja 1000 is one of the world’s toughest off-road races, and few are talented (and crazy) enough to run it solo on two wheels. We follow along as one madman goes for glory.

RICK THORNTON IS fuming. Over the past 18 hours, the veteran dirt bike rider has covered more than 500 miles of hard terrain, carving his way through a relentless gauntlet of sandy washes, ruts, and steep mountain passes that combine to make the Baja 1000 arguably the toughest off-road motorsport race in the world. Whereas most other pro motorcycle racers are competing on teams of four, Thornton, 52, is trying to “Ironman it”—complete the race solo. Having ridden more or less nonstop since the race’s predawn start, he just battled two rivals over a nasty section of bumps to give himself a cushion coming into the most important pit stop on the course. And he can’t find his crew.

His hands are numb, and his knees are buckling from constantly riding up in the attack position. The bike is even worse off: His front brake is slipping, and the taillight and GPS are busted. Then there are the damned trucks. Released seven and a half hours behind the motorbikes, the trophy trucks, as they’re called—each one a growling 1,000-horsepower juggernaut—would be catching up any minute now, thrashing an already sinister racecourse.

A fast-talking Oklahoman with cool blue eyes and a grizzled goatee, Thornton has proven reserves of willpower. As a 5'11 freshman in college, he’d walked onto the 1985 University of Oklahoma football team, the year they won the NCAA title. In his 30s, he picked up competitive jiu-jitsu and, at 45, took gold in a world championship event. The first time he ran the Baja 1000, in 2006 with his brother, his team winged it and finished strong after going out and drinking “more than a few beers” the night before.

But two previous attempts at running it solo had taught him that success demanded more than a never-say-die attitude: The first ended in physical collapse and near death; the second in disqualification for finishing over the allotted 36-hour time limit after one too many crashes.

Now he scans shadowy roadside camps for a familiar face. “I’m pretty much screwed,” he says, with another 300 miles to go before the finish line.

SOMEWHERE BETWEEN an ultramarathon on wheels and a fever dream, the SCORE Baja 1000, as it is officially called, is an infamous race through the Mexican backcountry where anything still goes. Inspired by a company-sponsored project to test the durability of Honda motorcycles, the “granddaddy of off-road races” has been run on the namesake peninsula since 1967. It has attracted top competitors from around the world and Hollywood motorheads including Paul Newman, James Garner, and Steve McQueen.

Big-brand sponsors and cameras have followed, but the rogue, egalitarian spirit endures. Million-dollar trophy trucks share the course with motorcycles, quads, and stock Volkswagen bugs. Public roads are never shut down, meaning any local hero can jump onto the course. Nearly half of the competitors who start it don’t finish, and the prize money is a pittance. Yet every November, top riders, among them champions from NASCAR and Formula One, continue to flock to this desert crucible.

“When you finish a race in Baja, it’s like you’ve lived 100 lives,” says Roger Norman, the 2008 trophy truck champion and owner of SCORE (Southern California Off-Road Enthusiasts) International, the promotion company that organizes the race. “There’s nothing so exhilarating as doing something extremely dangerous and surviving. If this was super safe, all these guys wouldn’t be here.”