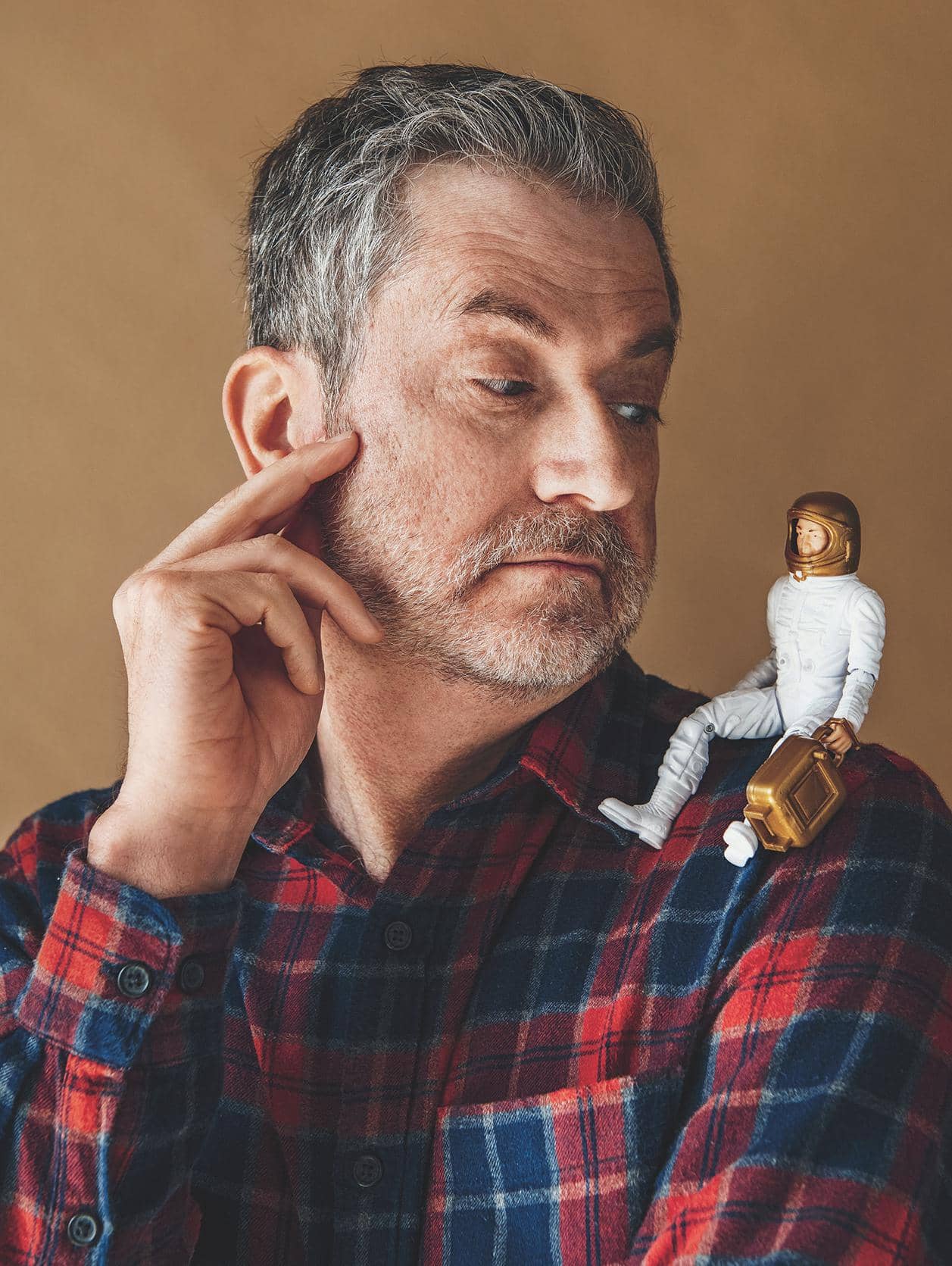 With The Office and Parks. and Rec, Greg Daniels created two of our most indelible sitcoms. Now, with space force, he's shooting for the moon –and under serious pressure to top both.

GREG DANIELS ISN’T happy with the last syllable of “Kokomo.” For the past hour, the 56-year-old TV writer and showrunner has been sitting in an editing room at Universal Studios, outfitted with a video screen, soundboard, and foosball table no one has touched. Dressed in a plaid shirt and dark pants and flanked by a half dozen producers and executives, Daniels is critiquing the first episode of Space Force, a Netflix comedy out in May about a new branch of the Armed Forces. He created the show with the actor Steve Carell, who plays Mark R. Naird, a tightly wound and uber-patriotic general.

In TV, most sound is added in postproduction, affording showrunners like Daniels, the creative visionary behind such unfuck with able sitcoms as The Office and Parks and Recreation, the power to tweak endlessly. Two sound engineers, stationed at mixing consoles, keep replaying snippets of the show on a screen at his command.

Space Force follows Carell’s General Naird as he tries to launch the new, titular military branch and return astronauts to the moon. He quickly gets sidetracked by his doddering dad (Fred Willard) and his wife and daughter, whom he must uproot for his new gig. Then there are his co-workers. Dr. Adrian Mallory (John Malkovich), a “civilian scientist,” proves especially grating, with his knack for summoning scientif ic data that runs counter to whatever Naird wants to do.

For Daniels, the problem with “Kokomo,” the 1988 coconut-scented Beach Boys hit, is not the song itself, which Naird sings along with in a pivotal scene, but the way the last syllable is isolated and drenched in reverb. “I feel like the last sound of oh on Kokomo gets clipped,” Daniels says. “I feel like that was Kokomah.”

The engineers replay the part, and voila, there it is—a slight ah vowel sound at the end. Daniels’ longtime executive producer, Howard Klein, is in a swivel chair. “Wait,” he says, spinning toward Daniels, “is it bugging you that you can’t hear the oh? Because I actually like it.”

“It’s just bugging me,” Daniels says. “Can we just hear the oh inside of the reverb? I want to hear that oh.”

If this detail seems extraordinarily minor—it is. But you have to understand that Daniels and his team have been working on this episode for more than a year. I repeat: a single half-hour of television, 365-plus days of effort. There’s serious and understandable pressure to get everything exactly right: Space Force marks the first time that Daniels and Carell have worked together since The Office, NBC’s beloved and long-running faux docuseries about a Pennsylvania paper company. Launched in 2005, the show turned Carell into a bona fide star in his turn as cringe-machine cum-boss Michael Scott and cemented Daniels as a sitcom savant.

Now, with Space Force, Netflix is hoping and praying that a Daniels-Carell reunion can replicate The Office’s magic and spark a bingeing frenzy. Because Netflix has a Very Big Problem: The Office, its mostpopular licensed program, is leaving the platform at the end of 2020 (as is Parks and Rec, its third most-watched). Last year, NBC outbid Netflix for the broadcast rights, agreeing to pay Universal Television $500 million over five years to bring the show to its own streaming service. Netflix needs a juggernaut to fill the void and is reportedly shelling out $1 million per episode to Carell in its efforts.