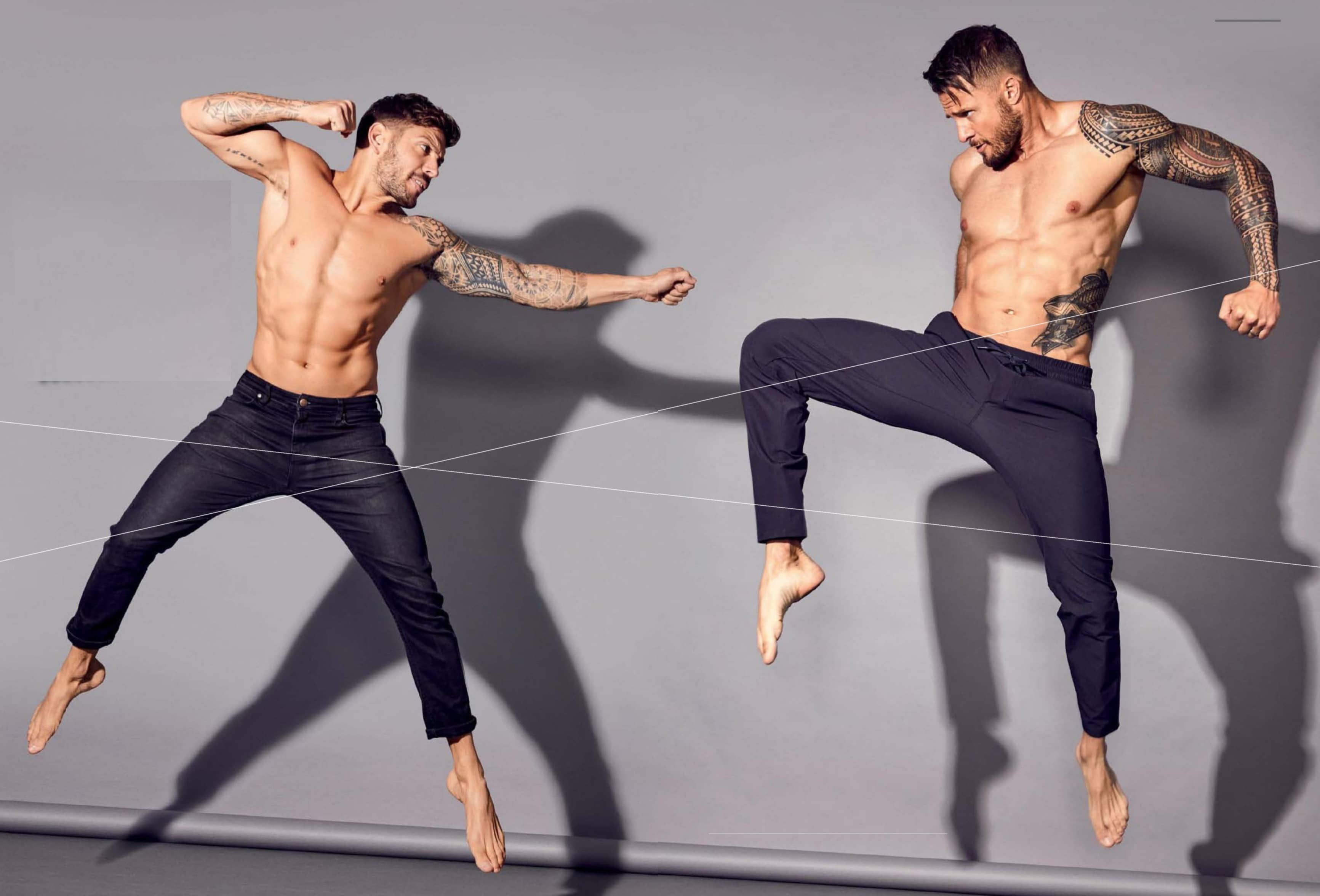 Your verdict is in on the two fiercely competitive trainers behind Chris Hemsworth’s fitness app, Centr. Amid a no-holds-barred contest to determine who would grace this month’s cover, Luke Zocchi and Bobby Holland Hanton sat down with Men’s Health to reveal the secrets behind their success. Who knows? Maybe you’re cover material, too

Having spent 12 years absorbing all manner of knocks and spills for a roll call of Hollywood action heroes, stuntman Bobby Holland Hanton may seem indestructible. Recently, however, his body threatened to pack it in and end his career. His comeback is your inspiration never to surrender in the face of hardship

“I WAS BORN in Portsmouth on the south coast of England. At the age of four, I started gymnastics and eventually competed for Great Britain. Gymnastics puts you in good stead for any sport and I’m so glad I did it, but at 17 I stopped competing and pursued my love of football, playing semi-professionally for two years.

In my late teens, I saw an ad in the newspaper to audition for a high-diving, acrobatic stunt show. I got the part and did live shows for three years. At 21, I spotted the name of an ex-gymnast in the credits of Casino Royale for stunts. I knew I wanted to take my talent into this area, so I found out the criteria for becoming a stunt performer in TV and film. I needed to make myself elite in six out of 12 disciplines.

I was already over the line in high-diving, trampolining and gymnastics so I took the test for those straight away and ticked them off. That left three more and I chose kickboxing (which meant becoming a brown belt), swimming (taking the equivalent of the SAS swimming test) and scuba diving (divemaster). The swimming – a lot of breath-holds, treading water and swimming in clothes – was the hardest. I hadn’t done much swimming and it wasn’t natural for me. The training for that alone took me six months.

The thing is, the training sort of prepares you for the industry but it’s once you’re on the stunt register that you have to learn to become a stunt performer. It’s not only the high falls and getting thrown through windows and the general smashing and crashing. It’s learning to react and mimic the movement patterns of the actor, as well as etiquette on set. You’ve got to learn as you go and learn pretty quickly because it’s a cut-throat industry.

I’ve brought up 12 years as a professional stuntman and done 49 feature films. I’ve worked on some of the biggest movies of all time, stunt-doubling for some of the most amazing people: Daniel Craig as Bond, Ryan Reynolds as Green Lantern, Christian Bale as Batman; Chris Evans as Captain America, Henry Cavill in Mission: Impossible – Fallout, Channing Tatum in Jupiter Ascending and, of course, Chris Hemsworth as Thor.

I’ve worked with Chris for nearly eight years and we’ve done 12 movies together. He’s one of my best pals and he puts a lot of trust in me to make sure I look after his safety – and to make him look good. He likes what I do for him and the way I move for him. He’s a phenomenal athlete and a great actor, but there’ll be times when he’ll decide, ‘No, I don’t want to do that – that’s you, Bob’.

Before shooting, I see what shape the actor is in and I do everything in my power to be as close as possible to their physique. But I have to say that Chris is by far the hardest to match. Because he’s just a specimen. He’s ridiculous. He looks like he’s been carved out of ice. He’s not just big – he’s big and lean, which is the hardest thing to maintain or even to achieve in the first place. But it’s the challenge I take on each time.