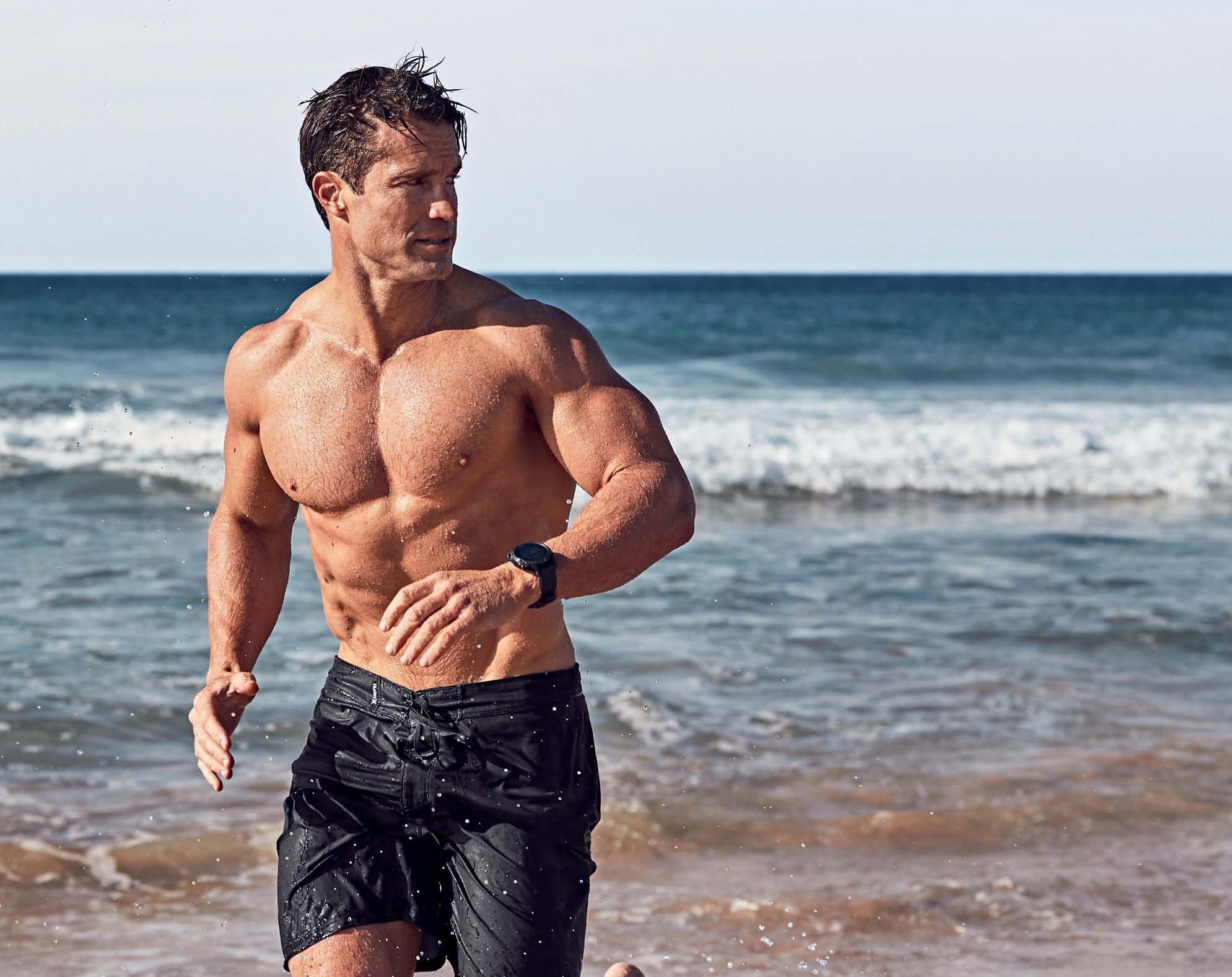 Whether he’s chasing a story in a danger zone or a new fitness PB, Sunday Night reporter Denham Hitchcock is a real-life Clark Kent

Daniel Williams
IF DENHAM HITCHCOCK’S assignment du jour were to compile a report on his own life, how would he start it? Perhaps it would be in the surf at Sydney’s Dee Why in the summer of 2016, when he glanced to his right across the break and noticed a woman on her board. “She was paddling around in a Brazilian bikini, which is eye-catching,” recalls Hithcock. “She was surfing with another guy, and I was just hoping he wasn’t her boyfriend.”

Except, it’s not Hitchcock’s style just to sit there hoping. That kind of passiveness . . . well, it doesn’t get you anywhere, does it? “So I waited for him to catch a wave, then I paddled over and said hello.”

The beauty turned out to be Mari Borges, a (single) Brazilian expat and hostel manager. She and Hitchcock hit it off, bonding over a shared love of fresh air, exercise and salt water. “We’ve been inseparable,” says Hitchcock, who was 40 at the time. They’re getting married next February.

It would be a decent opener, and it would speak to Hitchcock’s don’t-die wondering approach. But it’s a mite too soft and sentimental for a journalist of his ilk. This isn’t a bloke who shadows the dressmaker before a royal wedding. This is Sunday Night’s toughest operator, who’s in his element reporting from a Middle East battlefield or buttonholing a slippery murder suspect.

So though it’s painful, Hitchcock would more likely hark back to something that happened a long time ago – when he was 14, in fact, and enjoying a summer scorcher on the Hawkesbury River with his dad, Kevin. Young Denham, home from boarding school for Christmas, had tied a rope to a branch and the pair were swinging out over the water and dropping in.

Then disaster struck. On a downward swing, Kevin’s foot clipped the bank, throwing him off kilter and sending him headfirst into the shallow water. Watching on, Denham was at first unconcerned when his father failed to resurface. “I thought he was joking,” says Hitchcock. “I was getting ready for him to spring out of the water and grab me.”

As the seconds ticked by, however, it became frighteningly clear his dad wasn’t fooling around. The boy started duck-diving into the mud-coloured water. On his third plunge he caught a flash of his father’s white trunks on the river floor. He pulled him to the surface and hauled him on to dry land. “He could breathe and he could speak, but he couldn’t move anything else,” says Hitchcock, whose yells for help brought other family running to the scene.

A chopper would transport his father to hospital, where doctors confirmed a catastrophic injury. Kevin Hitchcock – 39 at the time and news director at Channel 10 – became an incomplete quadraplegic that day. It would be four months before he came home.

Over lunch in a cafe beneath the Channel 7 building in Sydney’s CBD, Hitchcock reflects on the consequences of that event with the impassive air of . . . exactly what he is: a seasoned television journalist who’s pretty much seen it all.

“Short term, I grew up very quickly. I became the man of the house a lot earlier than anticipated,” says Hitchcock, whose youngest sister was a newborn at the time. “I was quite a rebellious kid, but all that stopped on that day.”

Longer term? “Partly because of my job I’ve been able to put it into perspective,” he says. “My father’s still here. I still get advice from him. I go around and cook him dinner every Sunday night. So I still consider myself fortunate.”

The idea that his father’s accident would have justified the son floundering in life irritates him. “Bad things happen to good people,” he says. “It’s the way of the world. But it’s how you deal with it that sets you apart. You can’t use it as an excuse. I’ve seen too many people do that.”