Step out of your SHADOW 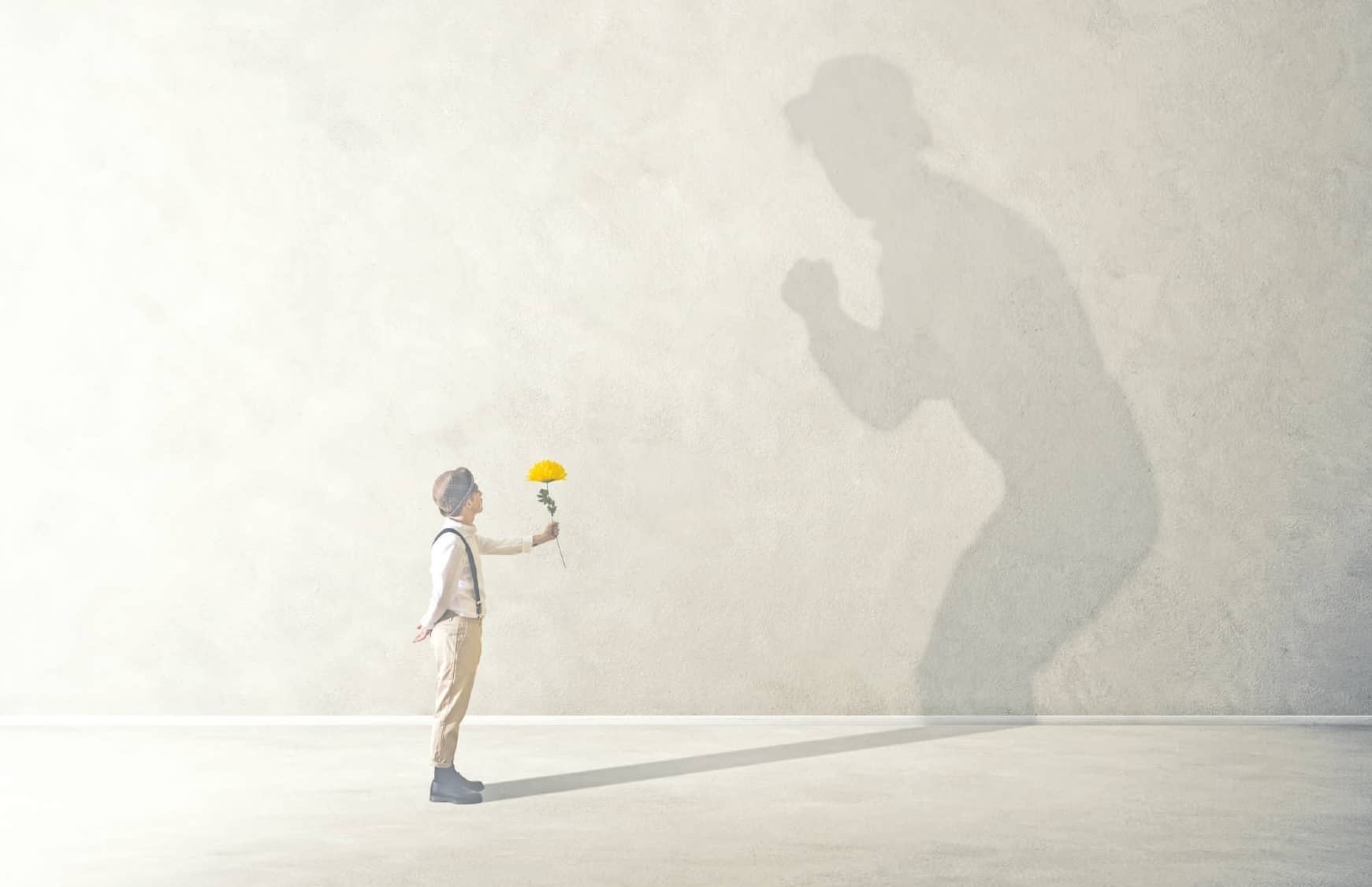 The shadow self is that which is buried deep in our subconscious and which manifests as negative traits. Sharmila Bhosale reveals how we can turn this shadow from foe to friend by practising awareness

Do you know that there is something walking along with us all the time, casting its influence on our thoughts and behaviour throughout our life? We cannot escape its control over us. It is this entity which dictates our destiny, which calls the shots for us, presents our face to the world, and determines our decisions. The only way to curtail its charge over us is to befriend it. Make it our ally. Get to know it deeply. Trust in it so that we can walk tall into the brightest sun where our shadow is at its smallest.

It’s no wonder that this being that we carry along with us in all our moments is called ‘the shadow.’ It is at its deepest and darkest when we fail to shine the light of awareness on ourselves, just like the long eerie enveloping shadow cast at twilight.

The term ‘shadow’ was coined by the famed Swiss psychoanalyst Carl Jung.

What is the shadow self?

According to Jung, ‘the shadow’ is the uncivilised, even primitive side of our nature. He believed that we needed to fully see this dark side of ourselves if we were to be a fully integrated human being. It is the side of our personality that contains all the parts of ourselves that we don’t want to admit having. “Most of our subconscious mind is the shadow— stuff which we don’t know about, since it’s been repressed or denied during childhood. It surfaces due to some triggers, and then it rises like a demon and takes over everything. That’s when you act it out, like someone who is possessed. You are taken over by blinding rage or a sudden crippling sadness,” says Leena Jacobs, PLR therapist, Inner Child healer and Meditator for the past 11 years.

The shadow is the ‘dark side’ of our personality because it consists chiefly of primitive, negative human emotions and impulses like rage, envy, greed, selfishness, desire, and the striving for power. All that we deny in ourselves—whatever we perceive as inferior, evil, or unacceptable—becomes part of the shadow. Anything incompatible with our chosen conscious attitude about ourselves is thrust into this dark side.

The secret is out: all of us, no exceptions, have qualities we won’t let anyone see, including ourselves—our Shadow. If we face up to our dark side, our life can be energised. If not, there is the devil to pay. This is one of life’s most urgent projects.—Larry Dossey (Healing Words)

If we are truly honest about growing, changing, and living life to the fullest, we will, at some point, come across many parts of our self that we will find difficult—if not completely disturbing—to accept. These ugly and frightening parts of us are elements of the shadow self: the darker side of our nature.

Jung differentiated between the persona and the shadow self. Our persona represents who we would like to be and how we wish to be seen by the world. It is essentially the different social masks that we wear with different groups of people and situations. On the other hand, our shadow self is a part of our unconscious mind and is composed of repressed ideas, instincts, impulses, weaknesses, desires, perversions, and embarrassing fears. It is the darker side of the psyche, representing wildness, chaos, and the unknown. Jung believed that this latent energy is present in all of us, in many instances forming a strong source of creative energy, if acknowledged and accepted.

“A man is whole only when he takes into account his shadow.”—Djuna Barnes

“There are parts of us which are either not easy to accept or maybe it’s just not the right time for those aspects to come out in the open. Both could be a part of the shadow self. So, if it’s not the right time for those parts to come out, for those seeds to open, it is better they remain as the shadow self till then. Like a child, if given too much information at a young age, when he is not ready for advanced cognitive functions, it’s better those shadow aspects remain within him,” explains Shalu Mehrotra, a psychotherapist. 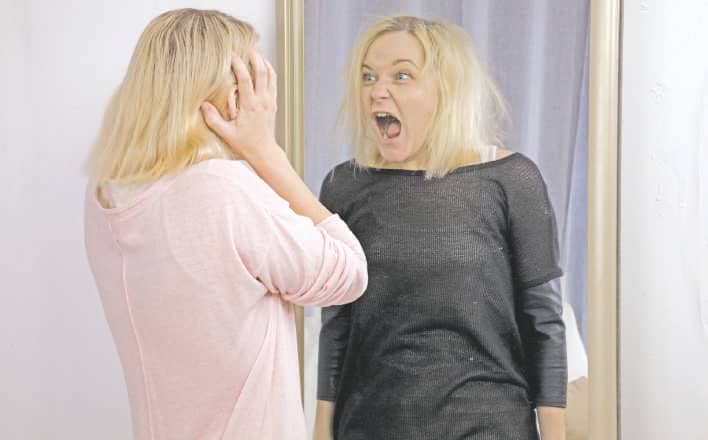 We are all like a blank slate when we are born. But at some point during our childhood development, we are conditioned to separate things into good and bad. The moment we internalise this good-bad distinction, our shadows are born and we begin to divide ourselves into multiple parts. As we grow up, we begin to sort out those traits within us that are acceptable to our family and society (the persona), and those that are unacceptable (which are later hidden away— the shadow). Over years of conditioning or trauma, the shadow is pushed deep within the recesses of the mind, out of any conscious awareness, till we are cut off from its existence, plunging it into the black hole of our mind.

“The shadow escapes from the body like an animal we had been sheltering.” —Gilles Deleuze, Francis Bacon: The Logic of Sensation

The only way it breaks through is via our reactions to situations and people. They act like a trigger pushing what’s beneath the surface into the open. Like a crack in a dam, the unresolved emotions, the darkest part of our being gushes out, drowning all that comes in its path.

“Once I was standing near the checkout counter of a shop waiting to pay for my purchases. Just as my turn arrived, another lady came through the side and paid for her item telling the cashier she had just one and to take her money first. As the cashier accepted her payment, I suddenly felt a blind rage. In front of everyone, I nearly threw all my items on the counter and yelled at the cashier saying I didn’t want any of the items if he had taken someone out of turn as I had been waiting in line. After that, seething with rage, I just left the shop,” says Pooja Shenoy. The next day, she wondered what had come over her. “I started observing my reactions, and then I came across a pattern. I would get irritated or simply fly off the handle when someone else got more attention or managed to upstage me.” Through a desire to break the pattern, she began to observe her reactions and stay with her feelings without trying to deny what was happening in the landscape of her mind.

Over time, she realised the deep insecurity that was at the root of her feelings, and the sabotaging behaviour that consequently arose from it stemmed from feeling lonely and unwanted as a child. Her parents had dismissed her feelings, and thus she came to see these feelings with guilt. She had pushed away these feelings of sadness and anger, distracting herself with denial. She had created a shadow that sprung on her like a crouching tiger.

“I embrace my shadow self. Shadows give depth and dimension to my life. I believe in embracing my duality, in learning to let darkness and light peacefully co-exist as illumination.”—Jaeda DeWalt

Have you ever done or said something and then wondered why you did or said it? A part of you was taking charge. Every so-called ‘accident’ is an aspect of yourself hijacking your behaviour.

Traits associated with ‘being good’ are accepted, while others associated with ‘being bad’ are rejected. We all have basic human needs, which include physiological safety and security needs, and a need for belonging. Expressing certain parts of ourselves as children invited negative feedback from those we wanted love and attention from. Maybe we got angry and threw a tantrum. Our parents reprimanded the outburst and withdrew affection. Or perhaps we acted with abandon or behaved silly in our first-grade classroom. Our teacher shamed us for our manner in front of the class. All the consequences of our behaviour threatened some of our basic needs, and so we adjusted our behaviour to gratify our needs and learnt to adapt in different ways to the external world.

These unaccepted or discouraged parts of our self in our early years were swept out of view and buried deep beyond our conscious awareness. As poet Robert Bly says in A Little Book of the Human Shadow, the child puts all of these unwanted parts into an invisible bag and drags it behind him. Plunging us into dark moods and draining our energy.

Interestingly, a lot of modern spiritual and religious work revolves around moving towards the ‘light’ and seeking the ‘light.’ A lot of life coaching involves positive affirmations, which, while being very upbeat, deny the existing reality of feelings. By continually focussing on the positive and the ‘light,’ we ignore the wholeness of what it is to be human! In fact, many of the spiritual and New Age teachings provide an escape for those who do not want to be responsible for the integration of their life. Facing our own dark side is the only way, ironically, to see the light.

Among the spiritual stalwarts, Osho was one of the first and perhaps the only one who talked about repressed feelings and the need to accept our dark side. The more our darkness is avoided, the more it grows within us, waiting like a volcano to gush out at any unexpected moment.