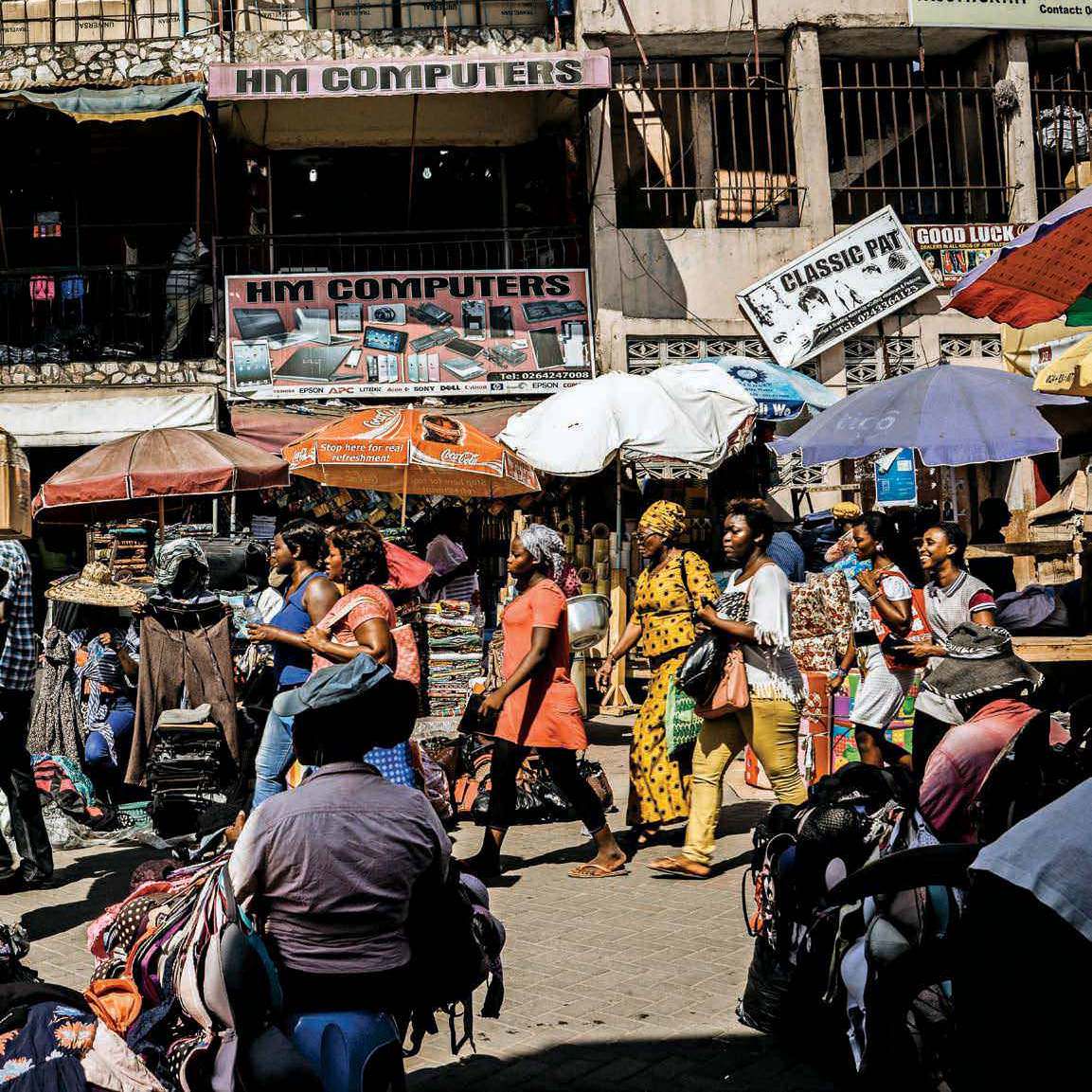 Drug Lane runs through a market in the heart of Accra, Ghana. It’s past the office towers going up to the east of the central business district, past the pushy vendors with fake Louis Vuitton luggage, and past the women selling trays of raw beef under the midday sun. The alley bristles with signboards for pills, powders, and other substances. One store is packed to the rafters with boxes of painkillers and antibiotics. On the wall are two posters: One is for Coartem, a malaria treatment made by the Swiss drug company Novartis, and the other advertises something called Recharger, supposedly made from the male silkworm moth. The notice is vague about specific uses, but it does advise using condoms.

The man behind the counter, Yaw Frempong, can’t recommend either drug—at least not formally. Like 85 percent of the people selling medicine in Ghana, he isn’t a pharmacist. Most of his stock comes from China, India, and Malaysia, imported by Ghanaian distributors who supply everyone from “licensed chemical sellers” like him to actual pharmacies and hospitals. It’s a system so porous that as many as one in three medicines sold on Drug Lane could be counterfeit, according to the U.S. Centers for Disease Control and Prevention, compared with about 1 percent in the U.S. and Europe. The fake drugs often have no active ingredient at all, or just enough to pass quality-control tests, and visually they can be indistinguishable from the real thing. One study, published by the American Journal of Tropical Medicine and Hygiene, found that in just one year, fake and poorly made malaria drugs contributed to the deaths of more than 100,000 children across Africa.

Nongovernmental organizations, international agencies, and other groups have tried to address the problem. A Ghanaian entrepreneur thinks he has an answer. Bright Simons announced the creation of his company, MPedigree Network, at a news conference on Drug Lane in 2007. MPedigree sells software that manufacturers use to label individual packs of medication with a random 12-digit code hidden under a scratch-off panel on the packaging. When a person buys medicine, she can text the code to MPedigree for free and get an instant reply telling her whether the product is authentic. Today, MPedigree says it has labels on more than 500 million drug packets. Clients include the drug companies AstraZeneca, Roche, and Sanofi.

As it’s grown, MPedigree has kept its identity fluid—adopting the startup label to attract attention and court investment, and other times emphasizing that it’s a social enterprise, the better to work with large multinationals with corporate responsibility mandates. The data MPedigree is collecting on African consumers has opened business possibilities that are strictly for-profit .Today the company authenticates a variety of commonly faked goods, from makeup to electrical cable.

It’s an unorthodox path for a startup, but then nothing about starting a company in Accra is conventional. MPedigree’s labels are printed in China and India, and its data centers are on three continents. Very little of this Ghanaian company’s business actually happens in Ghana. It’s a tough place to work. Blackouts can last 24 hours. The cedi was for most of this year the worst performing currency in sub-Saharan Africa. “We don’t keep infrastructure locally,” says Simons. “It’s virtually impossible at a reasonable cost.” He outsources critical services, such as Web hosting, to companies in places with regular power supplies. MPedigree puts up with it all, Simons says, in part to observe consumer behavior that outsiders never could—but mostly because it’s home.

Simons, 33, shuttles among the company’s offices in Egypt, Ghana, India, Kenya, Nigeria, and Tanzania and scouts for new business in Bangladesh, Rwanda, Sierra Leone, South Africa, Uganda, and Zambia. One evening in May, he’s in the lobby of the charmless, glossy Fiesta Royale Hotel in Accra. He keeps breaking away from an interview to read e-mails about a single authentication code that’s been checked 1,500 times over the past few days. Somebody has taken one genuine code, made thousands of copycat labels, and attached them to counterfeit morning-after pills somewhere in Nigeria. MPedigree is calling everyone who’d tested the fake code to find out where they got the drug and alerting regulators and law enforcement. A similar thing happened in March, Simons says; MPedigree was able to use its data to track down a warehouse full of fake malaria medication.