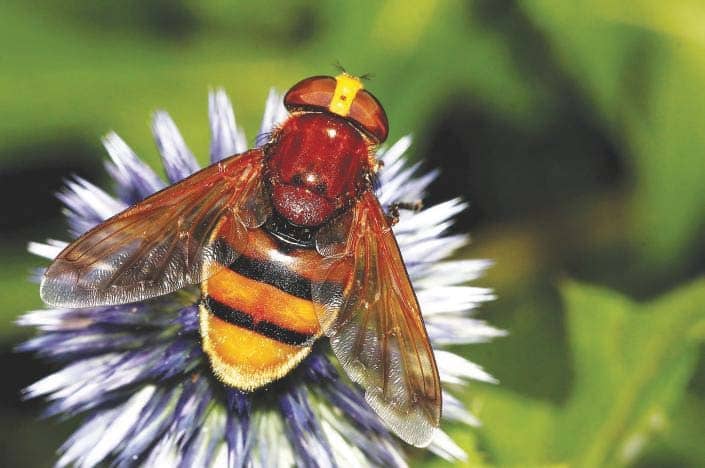 Val spots a large hoverfly that scavenges on wasps’ nests

SOME of you may remember me writing about a wasps’ nest positioned underneath the seat at the front of our house (AG 4 July). I’m afraid it met an untimely end when this year’s exceptional spring turned into an unseasonably wet and cool summer. The wasps became weak and unable to fly, and by early August the sodden nest had been abandoned.

Once we made sure that nothing flew out when the garden seat was rattled, the Best Beloved and eco-warrior granddaughter Ellie removed the nest in the last week of August, without fear of being stung. The nest had been successful at one time, though, because it contained at least a dozen large queen cells.

One thing led to another, as it does in the natural world, and a little later we spotted a huge hoverfly roughly the length of an adult’s thumbnail.

Its Latin name is Volucella zonaria and it’s a hornet mimic hoverfly with a yellow-and-black banded body topped by raised chestnut-brown humps on its upper abdomen. It’s the largest hoverfly seen in British gardens, although it’s not one of our 285 native hoverfly species.