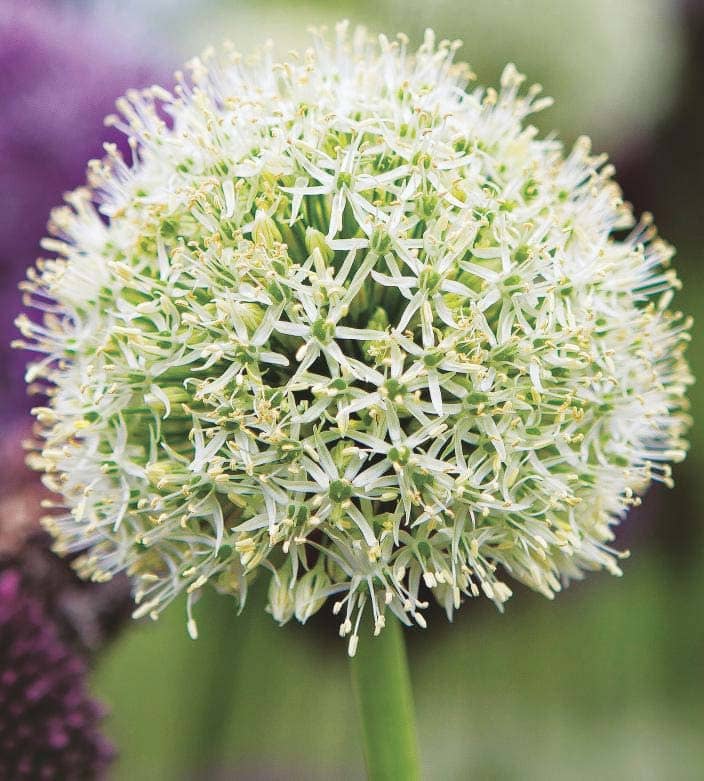 Versatile, colourful and perfect for pollinators, ornamental onions look just as glorious in borders as on the veg patch, and will fill the June flower gap perfectly, says Val Bourne

Alliums come in a variety of colours and flower forms, from burgundy egg-shaped A. sphaerocephalon to classically elegant purple and white globes

WITH their bold, rounded heads, comprising hundreds of small, star-shaped flowers and held on tall, thin stems, alliums are amongst the standouts of the late spring garden and flower well into summer. Resembling colourful microphones, it’s hard to believe they are related to the humble onion, but allow one of those staple veg to go to seed and you will immediately spot the resemblance.

When we think of alliums, we tend to think of purple globes, but in fact the flowers vary from maroon to rose pink, white and even blue, according to type. It’s not just spherical blooms, either, with options that look like fireworks, as well as dreadlocks and punk hairdos. The flowers last for weeks, and by choosing wisely it’s possible to have alliums in bloom from May until September.

Then there are the sculpted seedheads that often follow, extending the season of interest with their architectural perfection. The trick here is to cut the heads before they scatter huge numbers of black seeds; fail to do so, and you’ll get a carpet of grassy seedlings that need weeding out.

Seedheads vary in shape from completely circular to spiny sea urchin or neat drumstick, and it’s worth bearing this in mind when selecting your allium varieties for planting in the autumn.

A good starting point if you haven’t grown alliums before is A. hollandicum ‘Purple Sensation’ – easy, pretty and as cheap as chips, the true form has bright purple orbs of flower by mid-May. Selected by Jan Bijl in 1963, it’s still the most intense colour of any allium flower, and at 2¹/2ft (75cm) tall, it makes the perfect follow-up act for late-flowering tulips, opening just as they fade.

The only downside is the foliage, which always looks slightly shabby by May. Counter this by allowing it to pop up among herbaceous plants such as polemoniums, ballotas and hardy geraniums, the emerging foliage of which will camouflage those shabby allium leaves. Good seedheads follow, often in shades of green and purple.