When the great war broke out in 1914, Pfalz Flugzeugwerke, located in the city of Speyer in the Rheinland Pfalz were mainly producing licensed built aircraft. Starting out with the Morane Saulnier, then switching over to the LDG Roland D.I and D.II. All of which were pretty much obsolete the moment they rolled out of the factory, and proved no match for other, more competitive, fighters.

Instead of investing in new licenses for aircraft, they invested in the Wickelrumpf (wrapped fuselage) of the Roland firm and started producing their own aircraft. This resulted in the sleek, aerodynamic, and elegant Pfalz D.III single seat fighter, powered by the new 160 HP Mercedes D.III engine.

The reactions of the Jastas were mixed. It was incredibly manoeuvrable but lacked in other areas and again; Pfalz was outmatched by the aircraft of the likes of Albatross and Fokker. Small improvements were made, like mounting the machineguns higher, and adjustments to the size of the tail-plane which brought forth the Pfalz D.IIIA. Pfalz built a total of 750 D.IIIs and modified IIIAs, and the majority of those served till the Armistice, after which the German air fleet was broken down as a condition of the Armistice, which stated that apart from total surrender the Germans had to dismantle their air forces, navy, and military material.

The Start of a Diorama part 1

Months ago, during a meeting of a local club, I started an ICM standard B Liberty truck and started to think what I could add as cargo. Having seen a few trucks with an aircraft as cargo, I thought it was a cool idea and wanted to create my own. I went into the stash to see if I could find something that would fit into the cargo bed. This eventually ended up being Wingnut Wings Kit# 32006. For those of you not familiar with the brand, Wingnut Wings is about the Rolls Royce of 1:32 WW1 aircraft kits. Their kits are well-researched and well-engineered, and from the box lid to the decal sheet and everything in between, it simply shouts “high quality’’.

I quickly assembled the cockpit in a few subassemblies and taped the fuselage halves together to get a feel of how things looked. Things looked “super Affen Geil” to say it in German superlatives.

As it was my intention to have it look like a derelict aircraft that was salvaged by the Americans from an aerodrome, it needed to look like it was already stripped of the best parts to repair other aircraft. The first thing I did was to take a saw to the lower wings. Cockpit subassemblies were completed and made ready for paint. When I went looking for inspirational pictures for the livery, I came across that one photograph…. 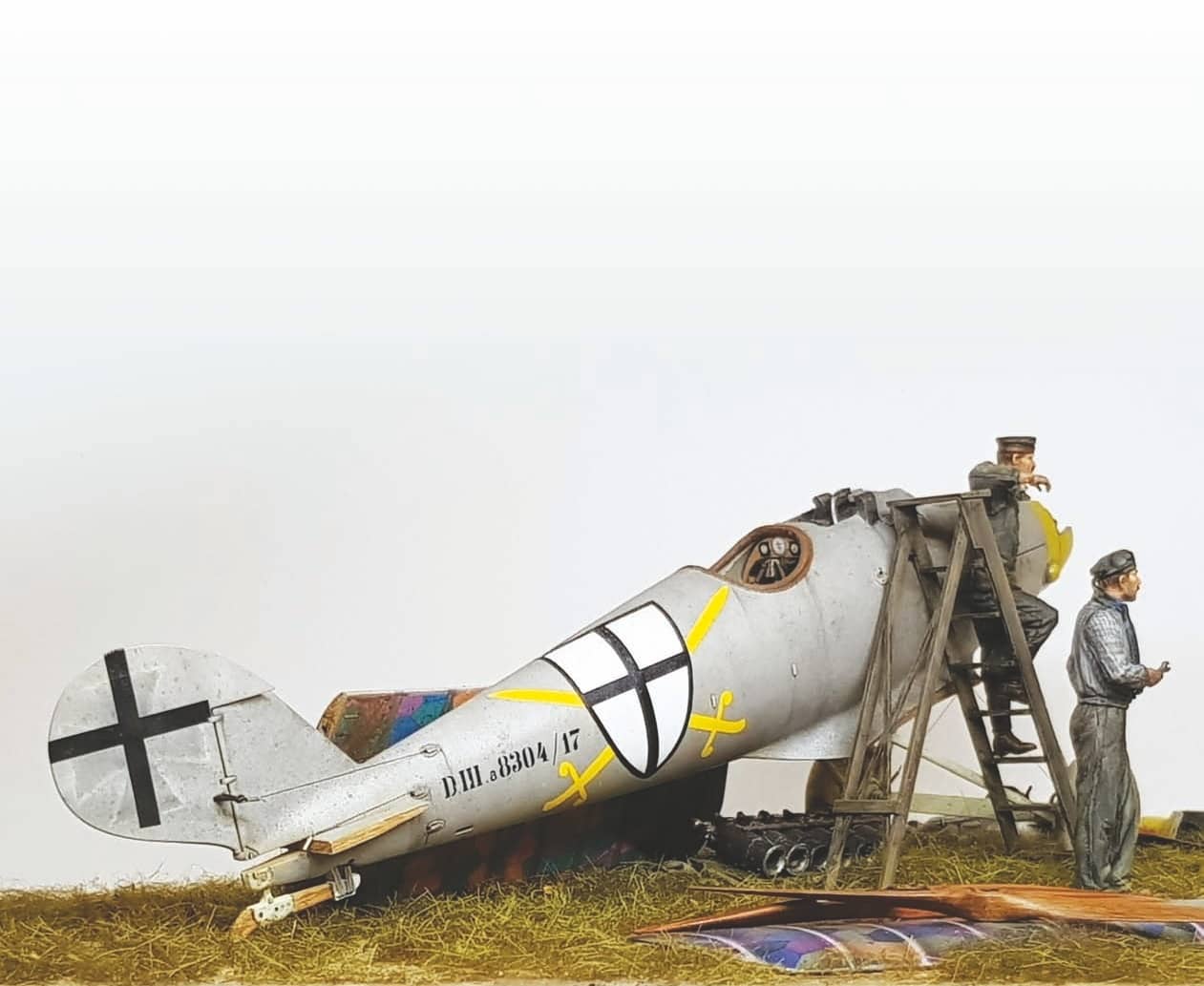 Kill your Darlings, The Start of a Diorama part 2

It happens to me quite a lot, I find a photograph mid-build which completely changes the course of the project. In this case I found a picture of a derelict Pfalz on the WNW website. The Pfalz was standing rather forlorn on a corner of an Aerodrome, after the armistice, among other aircraft awaiting to be scrapped. The bold livery it was carrying on its silver-grey fuselage was very striking, a big white shield with a black cross, and behind it, 2 crossed yellow swords. I found out that WNW sold that decal option on a sheet called “Pfalz D.IIIA Flying Circus Part 1”. The particular set was kindly donated by a fellow scale modeler from America, via a question through the Wingnut Wings Fans Facebook page. If you don’t know it check it out, you will find amazing builds there.

My Pfalz matched a lot of the features visible in the old photograph. All of the inspection hatches, and the wings, were removed; as were the Cabane struts and the tail-plane. A lot of the visible engine was also removed. The MG’s, the front bit of the engine cowling, and the prop were all discarded. Removing these features allows a viewer to see every detail inside, and this got me thinking of changing plans to make a scene that showed how the Pfalz got to this dire state.

The engine was attacked first. I cut the lower part of the cylinder heads from the block, reaming the holes, installing a scratch built styrene crankshaft, and making pistons; a few of which had the pushrod broken, which resulted in the failure of the engine, grounding the aircraft. The lower part of the cylinder block was rebuilt from styrene tube. New springs for the valves were twisted out of thin copper wire and several parts were cut off and opened up with a drill to show parts had been removed from the engine. Lots of small details were added like sparkplug wires and bolts on the block, with some details coming from the HGW engine detail set.