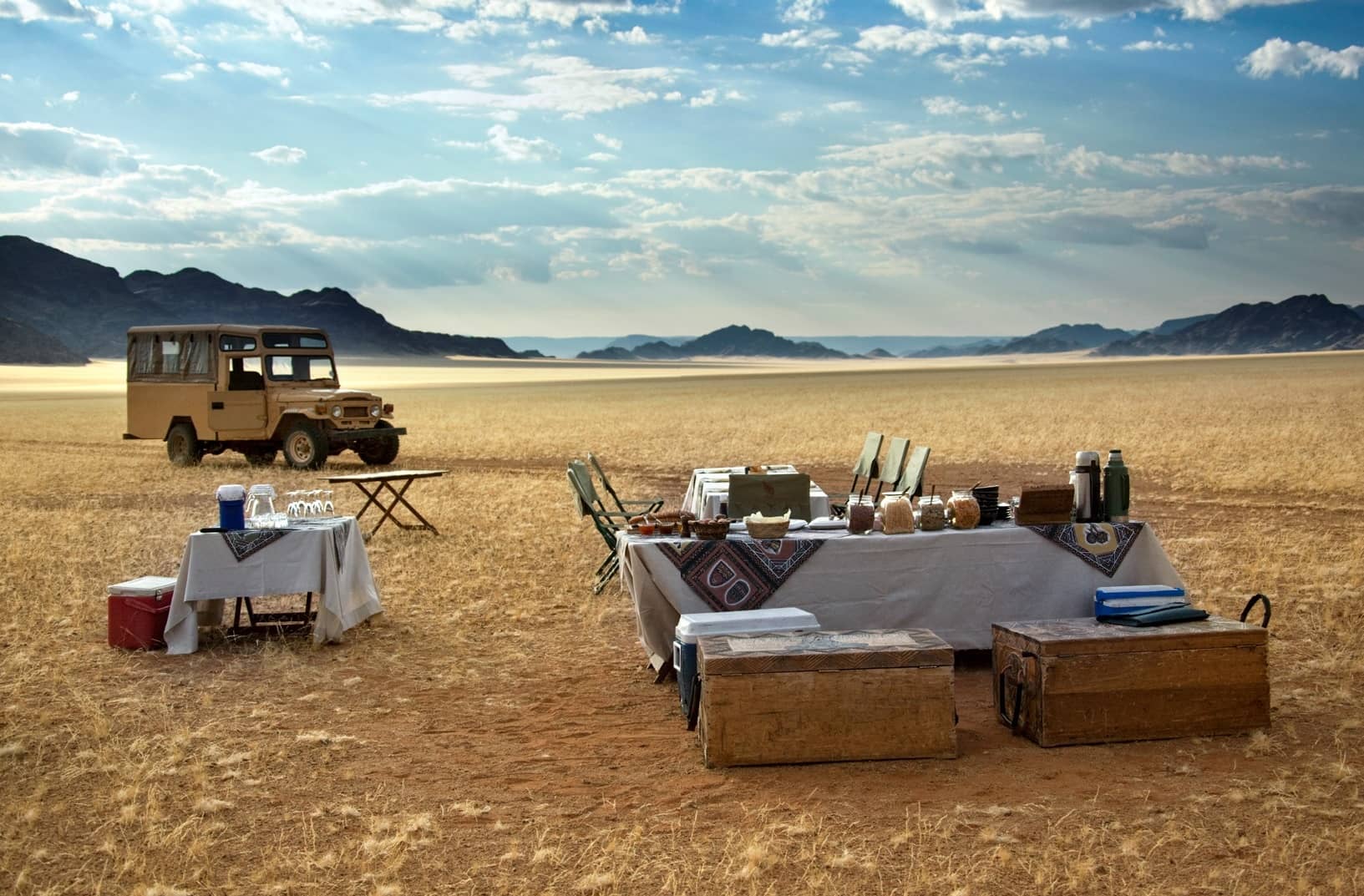 An apt description of a land inhabited by just some two million people. People who show toughness and resilience that is necessary to survive and hopefully prosper in a country that is distinguished by the Namib Desert along its Atlantic Ocean coast.

Visiting two farms in this untamed country, she describes some of her experiences.

“From Windhoek airport there is nothing, just open space all around. Sadly the city has many, many flats and townhouses and has lost much of its colonial appeal but, equally, many old buildings are being maintained. Heritage is important to the people and part of that is the wildlife. Don't be surprised if you see gemsbok on the street.

Heading north towards Etosha Pans, the vegetation is extremely dry, mostly arid grassland or desert. It is a very long journey and as the roads were being re-tarred, the strip roads made a nine hours journey even longer. Etosha Pans was a surprise with the white sand clay that was everywhere. 4x4's are the preferred vehicles and all were covered in the white mud. The resorts are 5 star, filled with mostly German visitors. The staff are extremely friendly and clean airy rooms overlooking the plains, made this visit memorable although we did not see many animals other than gemsbok, ostriches, secretary birds. And one desert elephant.

Next stop was where the dunes meet the sea. There is a magical view as hot, dry desert sand meets the blue cold ocean. The small town of Swakopmund was sparse. A hoped-for the boom in the economy did not materialize but the place made the best Fishbein and walks on the beach were superb. Not a soul in sight, even a dead seal on the beach had not yet been touched by scavengers. Showed just how wild this land is. Walvis Bay was formerly a part of South Africa – it is a colorful industrial port town, very similar to Durban.

I stayed at two farms, one a cattle farm and the second a sheep and horse farm. Both could be small reserves all on their own. Farmers can only survive by using solar systems and pumps. Food is very much German in origin.”

Between the endless seas of sand and the icy waters of the Atlantic lies the Skeleton Coast - the area's name derives from the whale and seal bones that once littered the shore from the whaling industry. Nowadays the coast harbors the skeletal remains of the shipwrecks caught by offshore rocks and fog. It is also an animal graveyard. The harsh climate and lack of water can make it difficult to survive on the Skeleton Coast, and death is found everywhere. Elephant rib cages mixed with turtle shells, topped with whale vertebrae and seal skulls litter the sand.

MORE STORIES FROM GLOBAL AVIATORView All