Not Your Father's Simulator 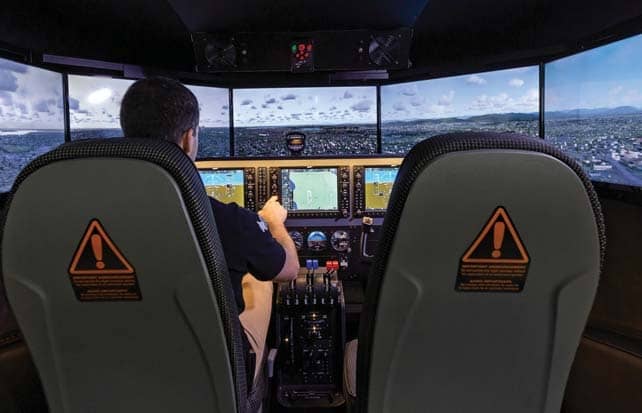 It wasn’t very often during four years of aviation training at Purdue University that my eagerness to attend class was less than enthusiastic. But it waned on the bad-weather days when the substitute for flying an airplane was the 1950s or ’60s Frasca simulator. After an airline career of referring to a sophisticated, multimillion-dollar Level D, six-axis simulator as “the box,” it’s now sobering to realize that I trained in a version from which the slang namesake originated. No argument that the clunky, coffinlike machine was aptly christened.

When my friend Wayne Harrison, a freshly ordained CFI and CFI-I, mentioned a desire to visit a company that has engineered an innovative professional simulator for around $100,000, I expressed interest. My experience with computer-based general aviation simulators extends only to Redbird Flight Simulations’ products and the varied degrees of sophistication available in the cottage industry of the hobbyist’s fake-airplane world. The visit would be to the “left coast” of Florida, giving Wayne an excuse to operate IFR with his prize possession, a Mooney Ovation.

Our arrival to Signature Aviation at Tampa International (KTPA) from Flagler Executive (KFIN) was without a bump in the road, literally and figuratively. Wayne had never landed at the airport, but I had experienced it on numerous occasions from a slightly higher and faster vantage point, notwithstanding parking on the other side of the field with a jet bridge included.