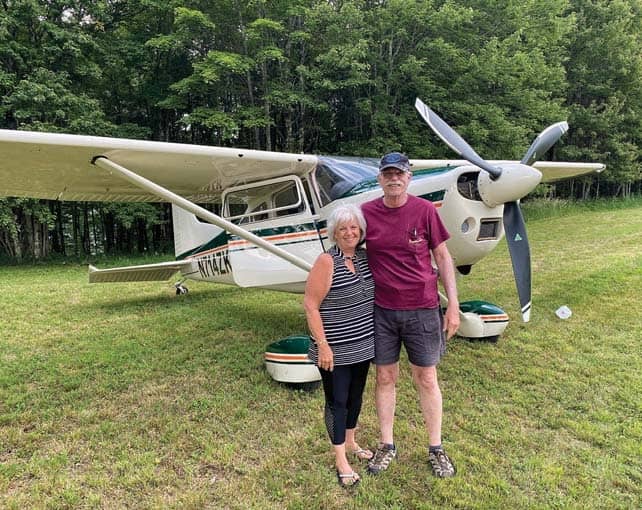 And an old memory

What a salesman! With one phone call, this Cessna 180 owner and regional director of the International 180/185 Club had sold me on joining the organization and speaking at their convention next year. And by now, you’ve probably gathered that “joining” and “speaking” are recessive genes in my DNA.

But I was intrigued when Eric Gardner described the cabin he and his wife, Shannon, had built on a mountain strip in the heart of West Virginia—a “mountain mama, almost heaven” spot (thank you, John Denver) that author Stephen Coonts wrote of as his Shangri-La. Eric said to think about joining the gaggle of 180 drivers who’d be there on Labor Day weekend.

Rather than waiting, my friend Joe Loewenstein and I flew my ’56 Cessna 180 to this 3,300-foot grass strip in Rainelle, West Virginia. Eric and Shannon had arrived from their home in Florida, and he drove us around, explaining that this place had been reclaimed from an abandoned strip mine in the early 1960s. After Lawrence “Squire” Haynes and two airplane-owner friends bulldozed, leveled and seeded it, Squire built a restaurant. And in those golden days of general aviation, it was a popular fly-in destination. The Squire is gone and his popular hash house closed, but somebody built three hangars, and that cinder-block restaurant still stands. WV30 is open for primitive camping, and Eric said he hopes to have new bathroom and shower facilities by next summer.

During our visit, another beautiful 180 landed, and Eric and Shannon’s friend Scott White joined us chatting at a picnic table. This place does seem to be a magnet for 180-series pilots. As we talked, I was thinking about my introduction to this rugged and beloved airplane.

It was a long time ago—50 years— but I won’t forget that Saturday morning at Lunken Airport in Cincinnati.