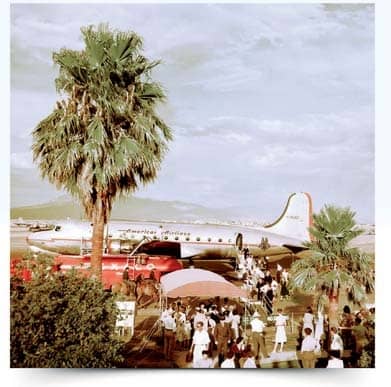 The sun and haze cast a warm orange backdrop to the massive silver machine, the outline of which dominated the view out the taxicab window. Though huge, it looked somehow stubby. The sun was going down, but we were just heading out. It was my second airplane flight. I was 8 years old.

My first flight had been a few months earlier, and I remember almost nothing about it. My father had been in the US Navy, stationed on a hospital ship in the Sea of Japan during the Korean War. It was 1953. When Dad’s ship tour was over, he was sent to Long Beach, California, for a few months. My mother, my brother, Steve, and I joined him there, living in a Quonset hut. It was a mysterious and romantic place for two boys who had spent most of their lives in a five-story brick building in Manhattan, New York. I suppose the building was what one would call a tenement, but the word then didn’t have the negative connotation it has today. It had a courtyard—all concrete—that was maybe 10-by-15 feet on a good day. While playing there, we could look up through the lens of the surrounding buildings and spot airliners on the River Approach to LaGuardia Airport. My first thought of flight—a love of flying was born.

The first flight, out to the west coast, began at LaGuardia, I think. The type of airplane is lost to me. I only remember with surviving irritation that my brother got the window seat. It was a long flight with a stop somewhere. Some airsickness was involved. Most of the memory of the trip was eclipsed by the excitement of seeing my father.