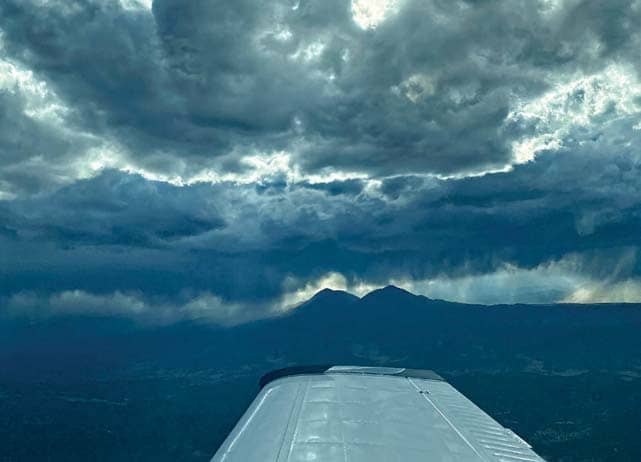 The continuing evolution of airplane and pilot

Strange times we are living in. When writing my last column, I wondered aloud if things could get any worse. (I turn in my column two months prior to publication.) As it turns out, they could—and for entirely different reasons than I imagined.

In January, I moved to New Mexico to shoot a television show. As COVID-19 quarantines began, it was canceled. I stayed put in Albuquerque, deciding to ride out the storm in a place with few cases and far from the now-nightmarish density of my home in New York. As anxiety rose nationwide, including my own, I found a comforting control in focusing on my own fears. Two years ago, my first column for this magazine told the story of losing an airplane to mountain wind shear in Telluride, Colorado. It was time to practice until it felt normal again.

I found a great mountain instructor here by the name of Geoffrey Veneklasen. Having lost that airplane to wind shear two years ago, I have a keen interest in honing my alpine skills. Here in the West, takeoffs from 9,000-foot density altitudes are a common occurrence. Geoffrey showed me a lot. For starters, you learn how to lean your engine properly for best power. Windy takeoffs are dealt with by building speed in ground effect, then climbing at higher than V Y speeds. As usual, knowledge lights the path forward. My fear was all based in ignorance. Now it’s just simple math that tells me when and how. Winds passing over the mountain in excess of 15 knots mean we’re not going. However, 28-knot gusts straight down the runway are no problem.

But even as my confidence as a pilot rose again, circumstances were getting stranger. Flying from KABQ to KSMO in early May, I checked the ATIS at Santa Monica, a normally very busy general aviation airport in Southern California. At the end of the recording, a different voice came on to explain that the tower would close for the day at 4 p.m. This on a Saturday afternoon, when all of the weekend pilots were out, many of whom need the extra help approaching and departing a runway smack underneath some of the busiest Class B on Earth. (Santa Monica is 4 nm away from KLAX.) During quarantine, everything was short-staffed or closed—restaurants, stores and, apparently, control towers.