THE F-5 AN AMERICAN TIGER 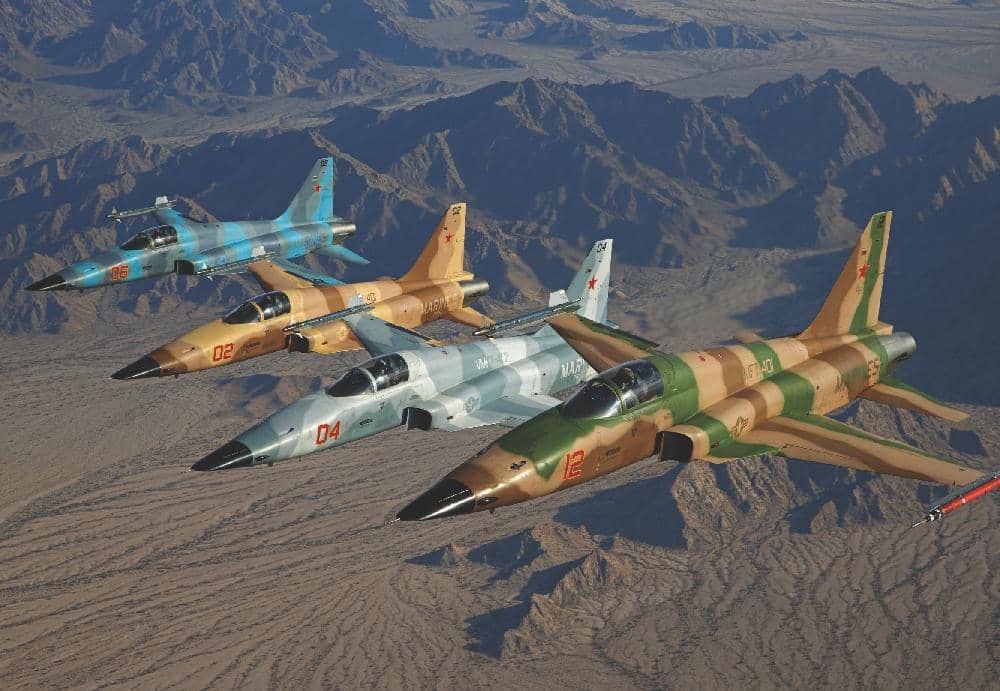 We all know about jet fighters such as the Phantom, Tomcat, Eagle, Viper, Hornet, F-22, and F-35, but what about the less-covered F-5? It doesn’t seem to secure as much time basking in the spotlight. Let’s indulge ourselves.

Conceived as a private venture and initially relying on internal funding only, the Northrop F-5 “Freedom Fighter” design (N-156) was initiated in the 1950s. The goal was to provide a lightweight, inexpensive, easy-to-maintain fighter aircraft. At first, it looked like the program was going to be less than a success, but that soon changed. As the U.S. Air Force was looking for a new trainer to replace their aging T-33As at the time, the N-156T (T = trainer and redesignated as the T-38) became a natural fit, making its first flight in June of 1956. It was low cost, had a supersonic ability, and was selected to replace the legacy Shooting Stars.

The N-156F (F = fighter and later designated YF-5A) first took to the skies just after the T-38, in July 1956. While the T-38 was churned out, with nearly 1,200 ultimately coming off the assembly line in the end, the F-5A light fighter was only ordered in relatively small numbers by U.S. Air Force. However, the F-5A did make an excellent fit for more defensively postured small countries. Thus, foreign sales of the F-5A, along with F-5B two-seat models, blossomed in a big way, with over 25 different countries flying F-5s.

The F-5 saw action in the Vietnam conflict, and the F-5C “Skoshi Tiger” was born, locking in the “Tiger” nickname change for the F-5 series. They slapped on some armor, a refueling probe, and some additional instruments (although there were only a handful of F-5Cs made). The F-5C’s biggest shortcoming was its limited combat range, and later the F-5Cs were handed off to the Republic of Vietnam Air Force. Some of these, along with F-5A/ Bs, were later captured by the North Vietnamese after the fall of the South. There was a proposed F-5D fighter/trainer model, but it was never manufactured. 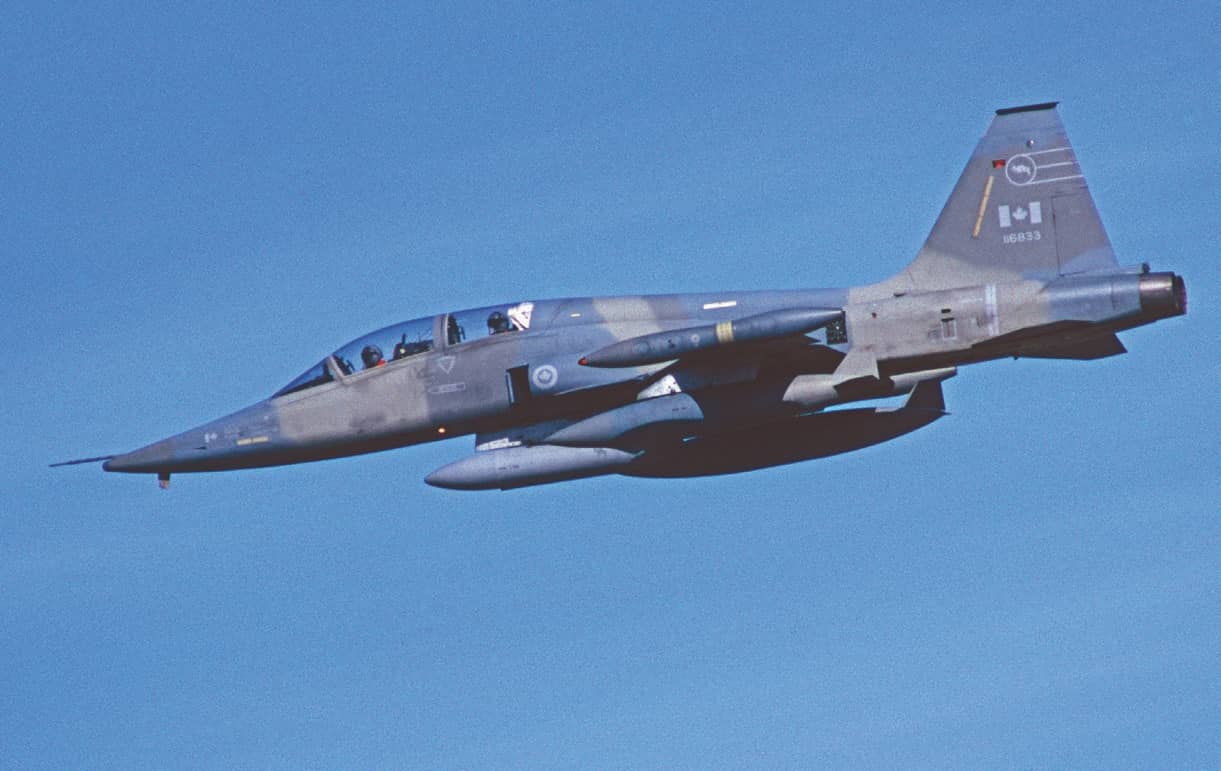 The E and F Models

In 1972, the first prototype of the second generation F-5 (F-5E “Tiger II”) flew. The Tiger II had numerous upgrades and enhancements over the legacy F-5A/B/C models. These included more powerful J85- 21 engines, radar, enlarged wing Leading Edge Extensions (LEXx) allowing for improved maneuverability, a greater fuel load, and enhanced avionics such as an INS, TACAN, and ECM gear. The F-5F was the “family model” (two-seat version).

Although the F-5E range was better than the A model, it was still limited. The U.S. military procured more E/F models than A/B models, and E/F models were used as fighter trainers and later for aggressor and adversary support, role-playing as “bogies” adorned in an array of various camouflage schemes. In the big picture, over 2,700 F-5s (not including T-38s) were manufactured and used around the globe. The U.S. Air Force eventually phased the F-5E/Fs out of service, and many were transferred over to the U.S. Navy and Marine Corps to serve as adversaries. FYI, in USAF talk they are “aggressors,” and in U.S. Navy/Marine Corps-speak they are “adversaries.” 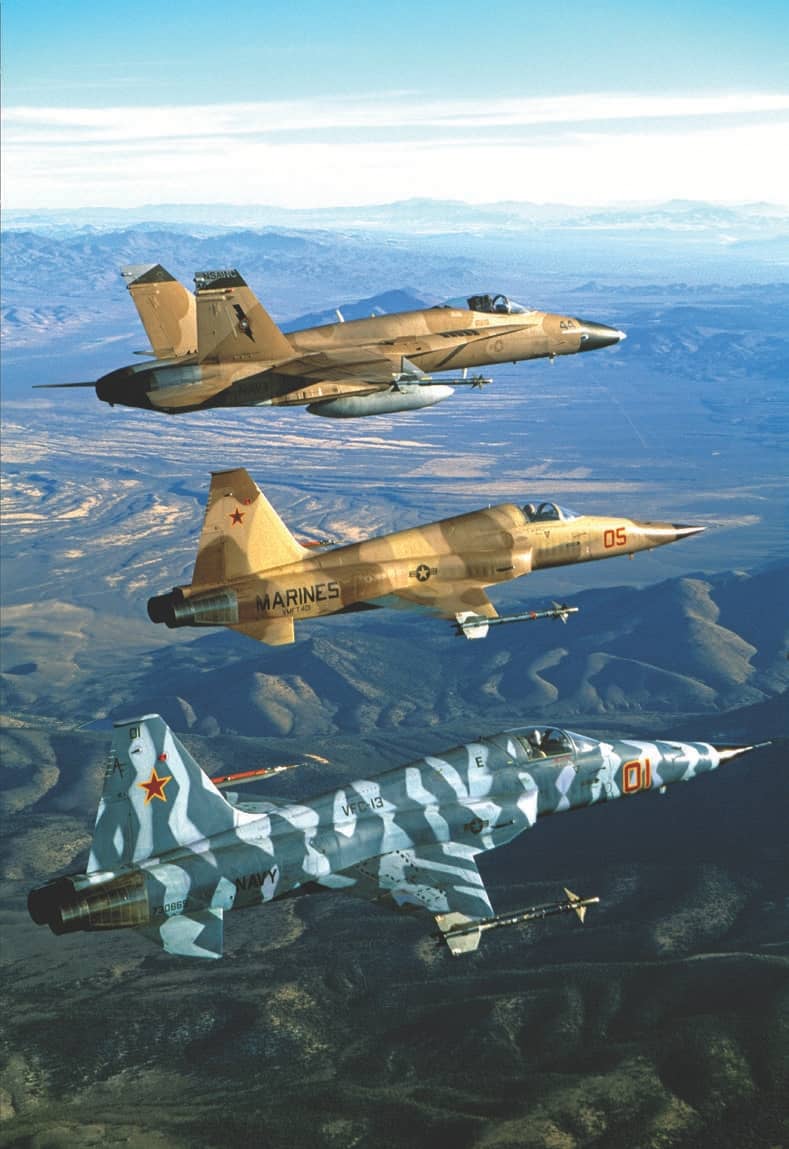 Aside from the limited number of aging F-5s found still in foreign military service, the U.S. Navy and Marine Corps now fly the F-5N version. As the F-5Es aged and the mileage piled up, the Navy made a deal with the Swiss Air Force to procure a robust number of their very low-hour (around 1,800 hours each) F-5Es for a very cost-effective sum. They were available due to the F-5E requirement numbers being reduced since the Swiss fleet now included F/A-18 Hornets and just a limited number of F-5Es still in service.

Even though the F-5N had been originally designated as F-5E by the Swiss, after the former Swiss Tiger IIs were finished being prepared for U.S. service, they were re-designated as F-5Ns, with the N representing “Navy” (the same as the F-16N). The Swiss F-5Es are different than their U.S. counterpart F-5Es; this can be attributed to different operating environments. The Swiss often keep their jets in caves and operate them around mountainous terrain, including the Alps. They may use roads as runways, so the aircraft need to be outfitted more austerely for shorter landing distance requirements. While the U.S. units rarely used F-5E drag chutes, you can bet it is not an uncommon sight in Switzerland. 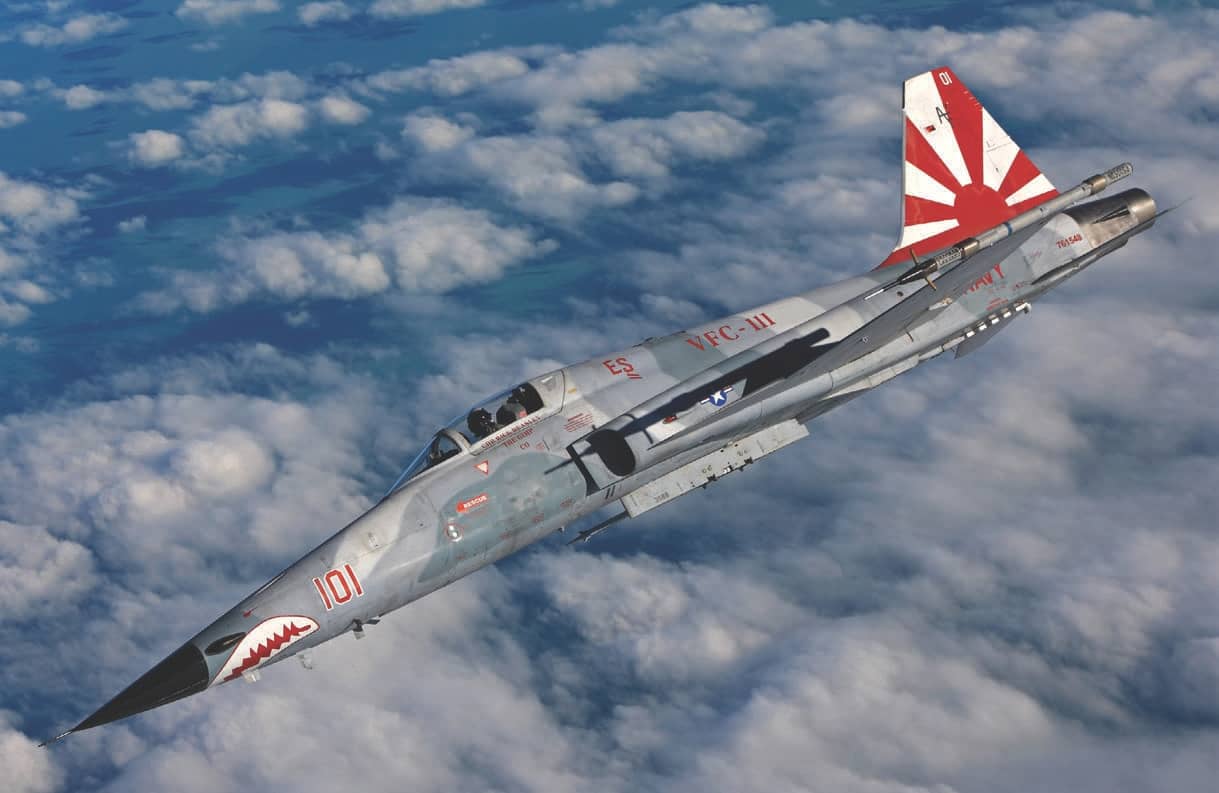 Some of the bells and whistles and differences found in the Swiss variants, compared with the U.S. aggressor F-5Es, included an INS, GOX, antiskid brakes, dual 30-watt UHF radios, an audible G-meter (tone sounds when the aircraft hits 6.5 Gs), an improved ejection seat (called the “single motion plus”), metric dials for altimeter and vertical velocity, radar warning receivers, and ASE (Aircraft Survivability Equipment) complete with U.S. military-style square chaff/flare buckets on the left hand side and underneath. The Swiss wanted the INS in lieu of a TACAN, and thus a Litton LN-33 was the system of choice at the time due to the occasional poor Swiss weather and numerous high-terrain areas within the country. The high terrain also prompted them to make enhancements to the ejection seats as well as have the dual-30 watt radio requirement. Externally, the only way to tell the F-5N from the F-5E is by the INS blisters just aft of the radome and also by the four Radar Warning Receiver (RWR) antennae (two front and two rear). The gross weight of the F-5N is about 200 pounds heavier than that of the F-5E due to the additional gizmos found on the jet.