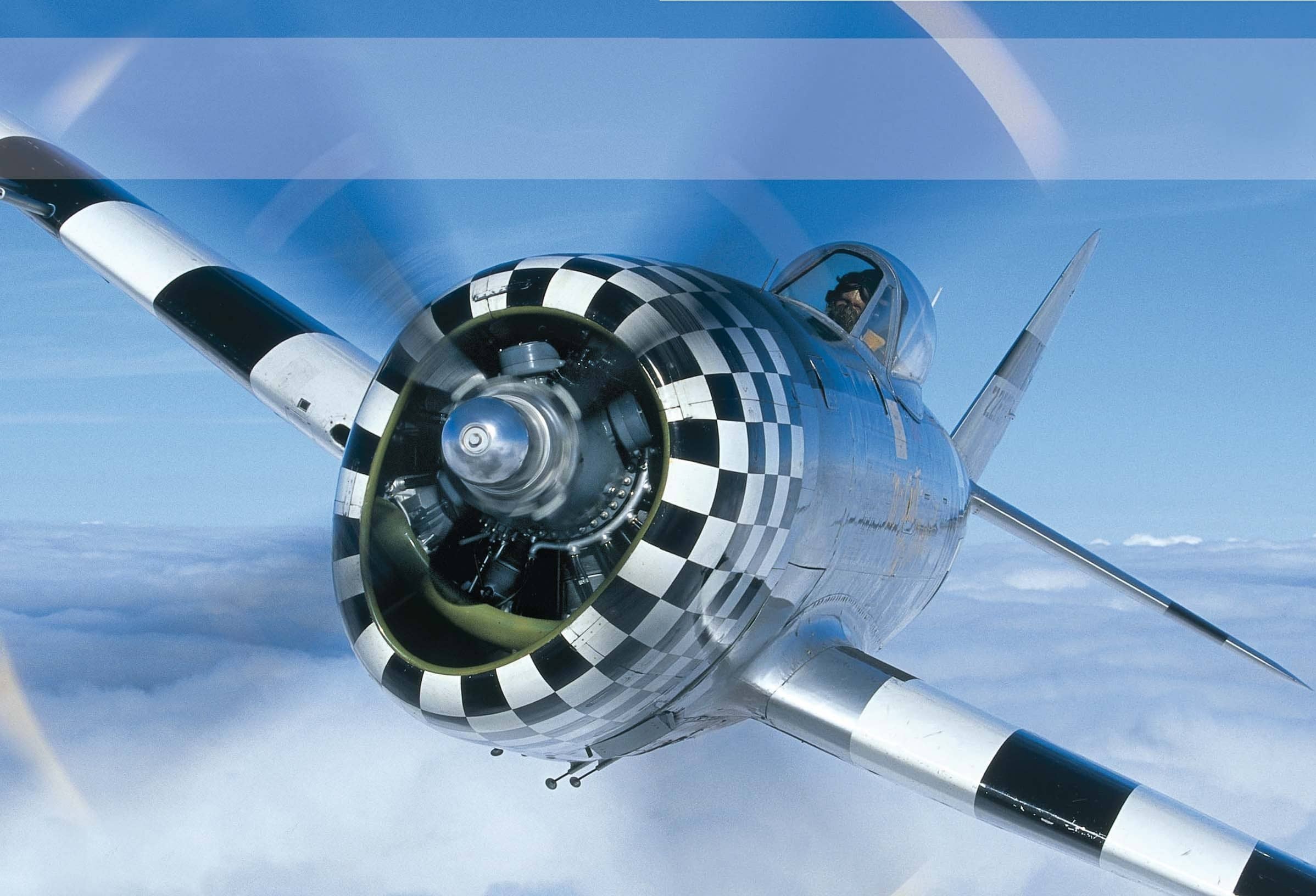 Jugs Over the Battle of the Bulge

A P-47D Thunderbolt pilot had many ways to die: flak; German fighters; engine failure at low altitude; premature detonation of his own bombs; hitting trees or power lines while strafing; and terrible weather—weather that led to midair collisions, takeoff and landing accidents on icy airfields, pilot disorientation and fatal spins, and collisions with hillsides disguised by low-lying clouds.

Weather kept the Thunderbolt-equipped 362nd Fighter Group grounded for half of November 1944 and limited operations in the first three weeks of December, even after the German Ardennes offensive began on December 16. The squadrons in the group, the 377th, 378th and 379th, were shifted to the Ardennes on December 23. That day, the weather changed for the better, and once committed to the fight, weather was not going to keep them grounded anyway. “We knew that [the ground troops] were bound to be in a bad way, and we flew every hour that the weather would permit,” said Capt. Joe Hunter.

By this stage of what would become known as the Battle of the Bulge, Bastogne was encircled, the German offensive neared its peak, and a bloody chapter in the 362nd’s history was about to begin. Between December 23 and January 23, the group would lose 17 Thunderbolts and 13 pilots killed or captured—but would exact from the Wehrmacht a terrible price. 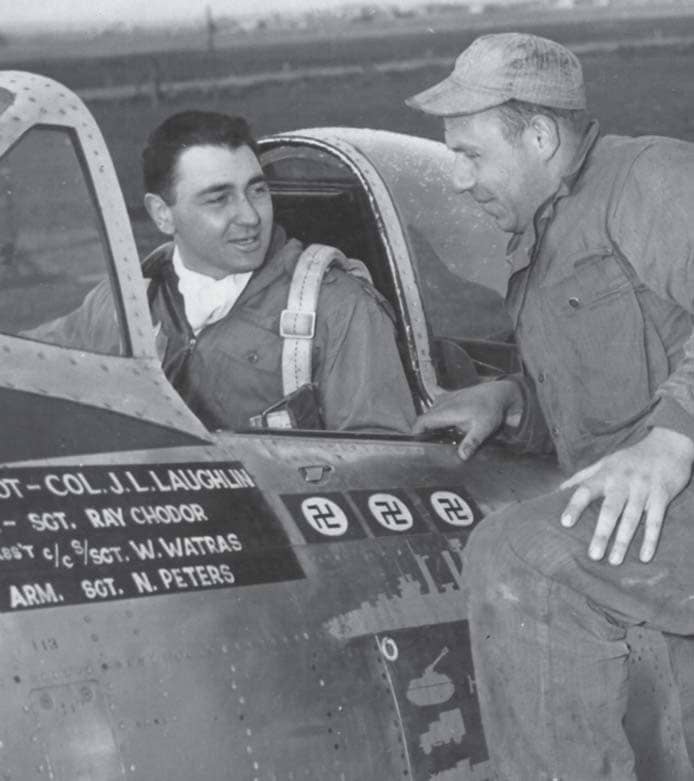 “The Germans were good at camouflage, and when it snowed, they were even harder to spot,” said Lt. Gene Martin, who on this day prowled over the Belgian countryside with seven squadron mates. The Germans’ advantage was lost when their trucks, tanks and half-tracks were rolling; wheels and tracks turned the white snow into a brown slush, and it was an arrow pointing directly at vehicles on the move. That was exactly what Martin and the other members of the 379th spotted this day: a brown smudge on the road between St. Hubert and Recogne, with 45 troop-laden trucks at its northern tip.

The Thunderbolts dived, and the convoy turned into a chaotic mass of braking, skidding trucks and panicked troops spilling from the vehicles. The Thunderbolts strafed methodically, tearing the trucks open and leaving all of them burning before shooting up the woods beside the road. This was just a start.

On their first day over the Bulge, the group’s 10 missions destroyed or damaged, by its own count, 84 trucks, 12 armored vehicles and 12 gun positions, plus the bridge at Echternach, which the 377th hit with rockets and napalm. Two planes were lost, but the attacks had been shattering; the planned attack on Houffalize by the 26th Volksgrenadier Division was postponed because the demoralized troops could not be organized for fear of the marauding P-47s. 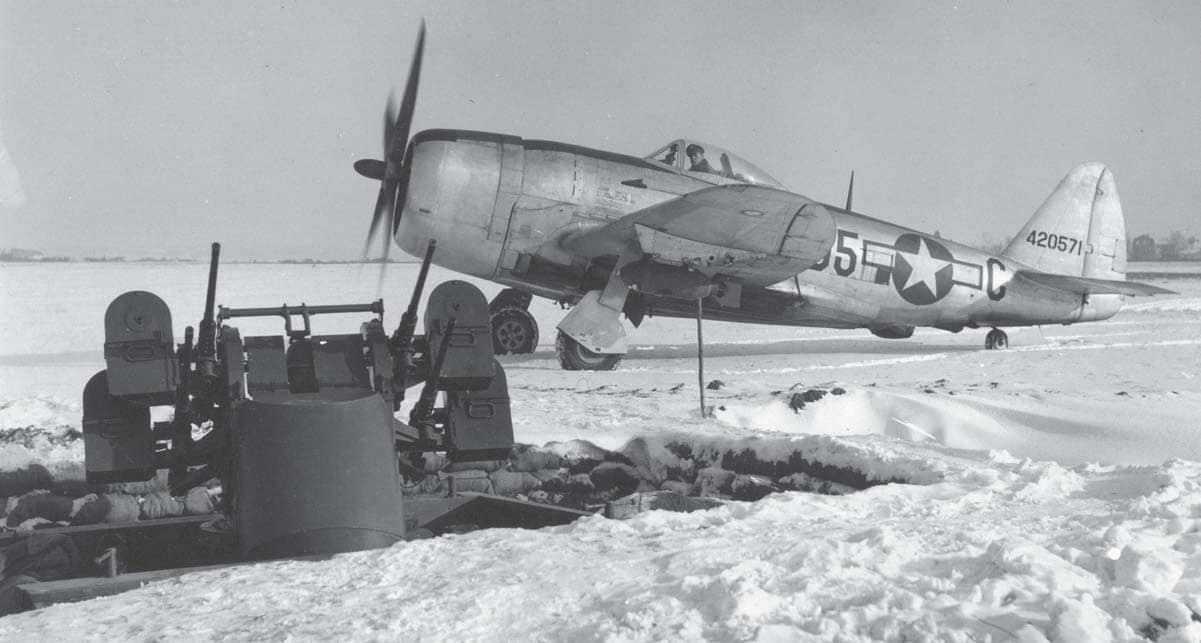 At dawn, the target was the 14th Fallschirmjäger (Parachute) Regiment, holed up at Remichampagne. The 378th flattened three buildings with bombs, and 90 trucks were wiped out by bombing and strafing.

“The Germans didn’t have enough gasoline for their vehicles, so they were moving them by train on flatbed cars,” said Lt. Duncan Morton. “I picked out a large truck. I was coming in fairly low when I shot at it—and it was an ammunition truck. I flew right through the flames of the explosion. Parts of that truck flew past me, especially one large fender. None of these things hit my airplane, fortunately!”

While the 378th was wrecking Remichampagne, two flights from the 379th headed for Bastogne, Lt. Howard Sloan’s flight low and Lt. Ralph Sallee’s flight as high cover. Above the front, Sallee spotted 25 Fw 190s swarming about at low altitude; he realized they were strafing American troops and radioed a warning to Sloan.

With no hesitation, “Sloan dived straight into the mess to drive them off our troops,” Sallee said, and he led his four planes to the aid of Sloan’s flight. “If I ever asked for divine guidance, it was then. In the short time that we took to lose altitude and get rid of our bombs, we were obliged to make head-on passes as the enemy turned to meet us. The head-on pass is suicide, as the cannon on the Fw 190 was lethal.” Sallee shifted his flight over slightly, putting the sun at his back and blinding the Germans to his Thunderbolts for a precious split second. The Germans’ aim failed them, and the P-47s wheeled in pursuit.