FLYING THE Bf 109: Two pilots give their reports 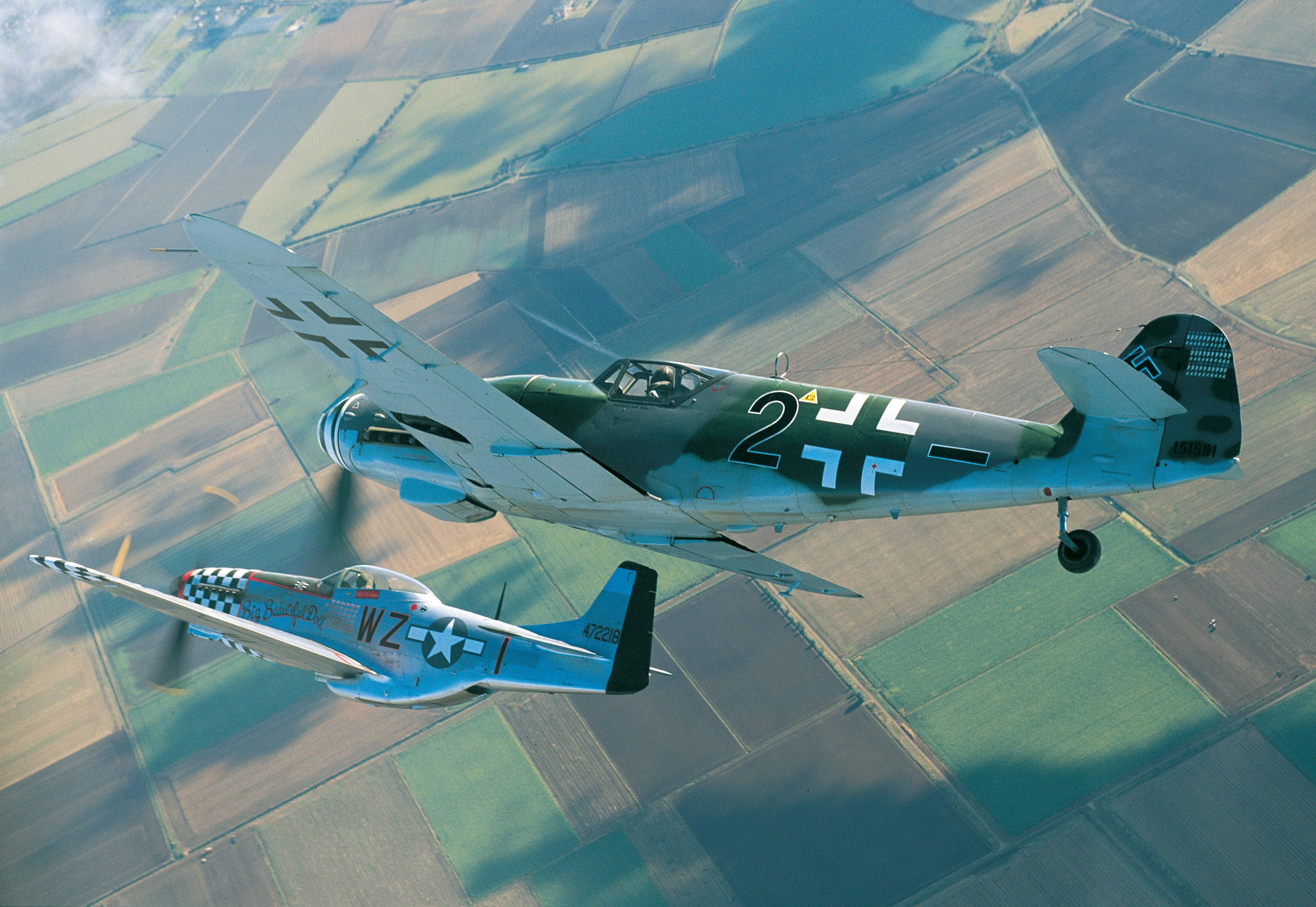 The Bf 109 is, without a doubt, the most satisfying and challenging aircraft I have ever flown. So how does it fly and how does it compare with other WW II fighters?

To my eye, the aircraft looks dangerous, both to the enemy and to its own pilots. Its “difficult” reputation is well-known, and right from the outset, you are aware that it needs to be treated with a great deal of respect.

As you walk up to the 109, you are at first struck by its small size, particularly if it is parked next to a contemporary American fighter. Closer examination reveals a crazy-looking, knock-kneed undercarriage, a very heavily framed, sideways-opening canopy with almost no forward view in the three-point attitude, a long rear fuselage and tiny tail surfaces.

A walk around reveals ingenious split radiator flaps and ailerons with a lot of movement and rather odd-looking external mass balances. It also has independently operating leading-edge slats. These devices should glide open and shut on the ground with the pressure of a single finger. Other unusual features include the horizontal stabilizer that doubles as the elevator trimmer and the complete absence of a rudder trim system. Overall, the finish is a strange mix of the innovative and archaic.

To enter the cockpit, you climb on board and gently lower yourself downward and forward while holding on to the windscreen. Once inside, you are almost lying down, as you would be if driving a racecar. The cockpit is narrow, and if you have broad shoulders (don’t all fighter pilots?), it is a tight squeeze. Once strapped in—itself a knuckle-rapping affair—you can take stock.

First impressions are of its simplicity. From left to right, the co-located elevator trim and flap trim wheels fall easily to hand. You need several turns to get the flaps fully down to 10 degrees, and the idea is that you can crank both together. In practice, this is a little difficult, and I tend to operate them independently.

Coming forward, you see the tailwheel locking lever. This either allows the tailwheel to caster or it locks it dead ahead. Next is the throttle quadrant, which consists of a huge throttle handle and the manual propeller pitch control. Forward and down on the floor is an enormous and very effective Ki-gas primer with a T-shaped handle. Directly above this and in line with the canopy seal is the red hood jettison lever. Pulling this releases two very strong springs in the rear part of the canopy and causes the rear section to come loose and, therefore, the whole main part of the hood is unhinged and can be pushed away into the airflow. Looking directly forward you see, clustered together, the standard instrument panel with the vertical-select magnetos on the left, starter and booster coil slightly right of center, and engine instruments all grouped on the righthand side. This aircraft’s instrumentation is all German, apart from the altimeter.

The center console under the main instrument panel consists of a 720-channel radio, VOR, ADF, and E2B compass. Just to the left of the center console, close to your left knee, is the undercarriage up/down selector and the mechanical and electrical undercarriage position indicator. On D-FEHD, this is a two-button selector. Select the undercarriage up or down position by lifting the guard and simply pushing the relevant button. Radiator flaps are controlled by a four-position selector— “Zu,” “Auf,” “Auto,” and “Ruhe” (rest).

The right side of the cockpit has the electrical switches, battery master, boost pumps, pitot heat, and that’s it! There is no rudder trim or rudder pedal adjust; also, the seat can be adjusted only during preflight and offers a choice of only three settings. If you are any bigger than me (six feet tall), it all starts to get a bit confined. Once you are strapped in and comfortable, close the canopy to check your seating position. If you haven’t flown the 109 before, you usually get a clout on the head as you swing the heavy lid over and down. Nobody sits that low in a fighter!

D-FEHD has a beautiful “Galland hood” that offers a much-improved view compared with the earlier, heavier frame canopy. 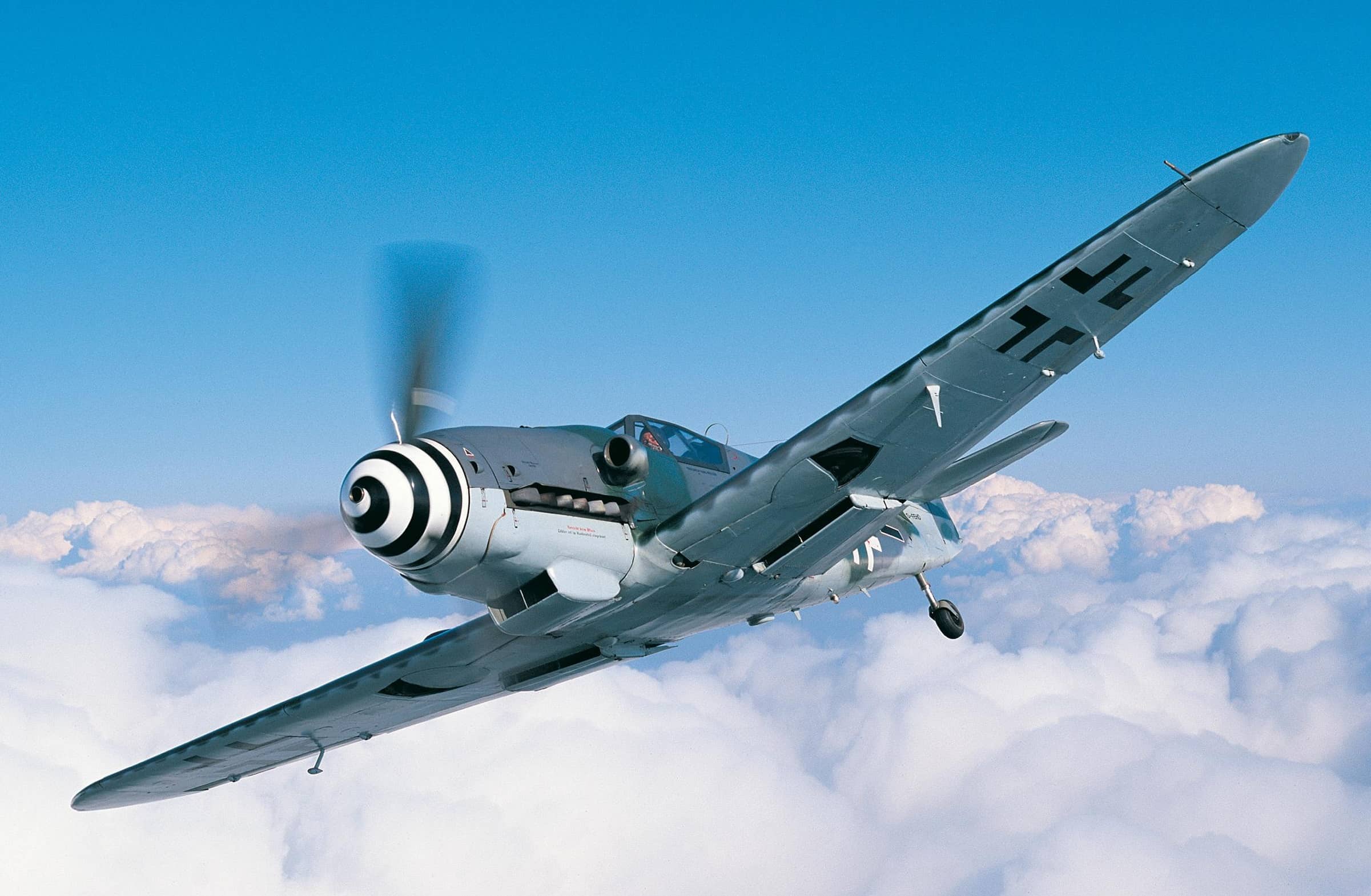 It’s getting close to going flying now! OK; open the hood again (in case you have to get out in a hurry). To start, power ON, boost pumps ON. Five good shots on the primer. Set the throttle to IDLE. Energize the starter; when the pitch of its noise reaches its apex, press the starter button. It’s a good starter, and with a brief snort of flame, the 109 fires up immediately.

Check the oil pressure right away to ensure that it is rising, idle initially at 700 rpm, then gently go up to 1,000 rpm, and the whole aeroplane starts to rock from side to side on the gear with some sort of harmonic. This is a most unusual sensation and it is good fun!