THE INDOMITABLE FEMININE SPIRIT BEHIND THE COCKPIT 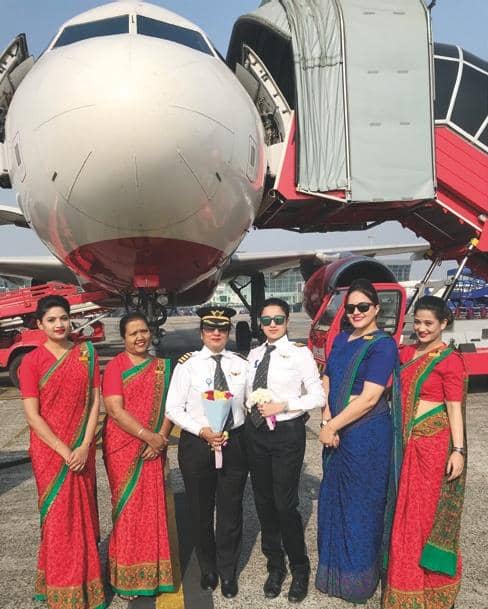 When did you decide to be a pilot? What was the thing that sparked the interest in you?

I am basically from MUMBAI and done my schooling and college from there. From childhood,I was known to dream of doing different things when I grew up (Name being SAPNA after all ). One day I wanted to be a ballerina, another day an archeologist, some day I wanted to run away and become a nun ( almost did ) till finally I found my EUREKA moment. I was attending my first year college in NARSEE MONJEE commerce ( literally forced by my mom to take up a boring desk job), which was facing the JUHU Flying Club.

I used to be fascinated by the small yellow aeroplanes taking off and landing, balance sheet of profits and losses the last thing on my mind.

After convincing my mother,I eventually started shuttling down Vadodara and MUMBAI for my flying career at a young tender age of just 17 yrs! I completed my PRIVATE PILOT LICENSE in Gujarat and went on to join INDIRA GANDHI RASTRIYA URAN ACADEMY(IGRUA) in RAE Bareli to complete my COMMERCIAL PILOT license.

What are the challenges that you faced in your pursuit of Awesomeness?

It was in 1986 that I started flying, and therefore you can understand the challenges of those times. Flying was unheard of those days, and commercial flying for girls was almost out of question. And that too, I came from a Gujarati family, where all convinced us that we were crazy to send a young girl away for training to UP. But I was in right place at right time, and got the best training with the best aircrafts in IGRUA which was also where Shri RAJIV Gandhi would visit and fly, Amethi being his constituency.

I got employed by age of 20 yrs into INDIAN AIRLINES in 1989, (12th woman commercial pilot of the country )and started flying the BOEING 737-200. Those days, being a woman pilot, one had to prove oneself, and had to be well above average to be considered average itself.But, I still must say, INDIAN AIRLINES which later merged into AIR INDIA has been phenomenally encouraging for all the lady pilots and always treated us equally. It’s been a long journey for me, and today I am an Examiner on my fleet,the only second woman Examiner of Air INDIA, flying the Airbus 320 and have almost 16000 hours.

MORE STORIES FROM AVIATION UPDATEView All