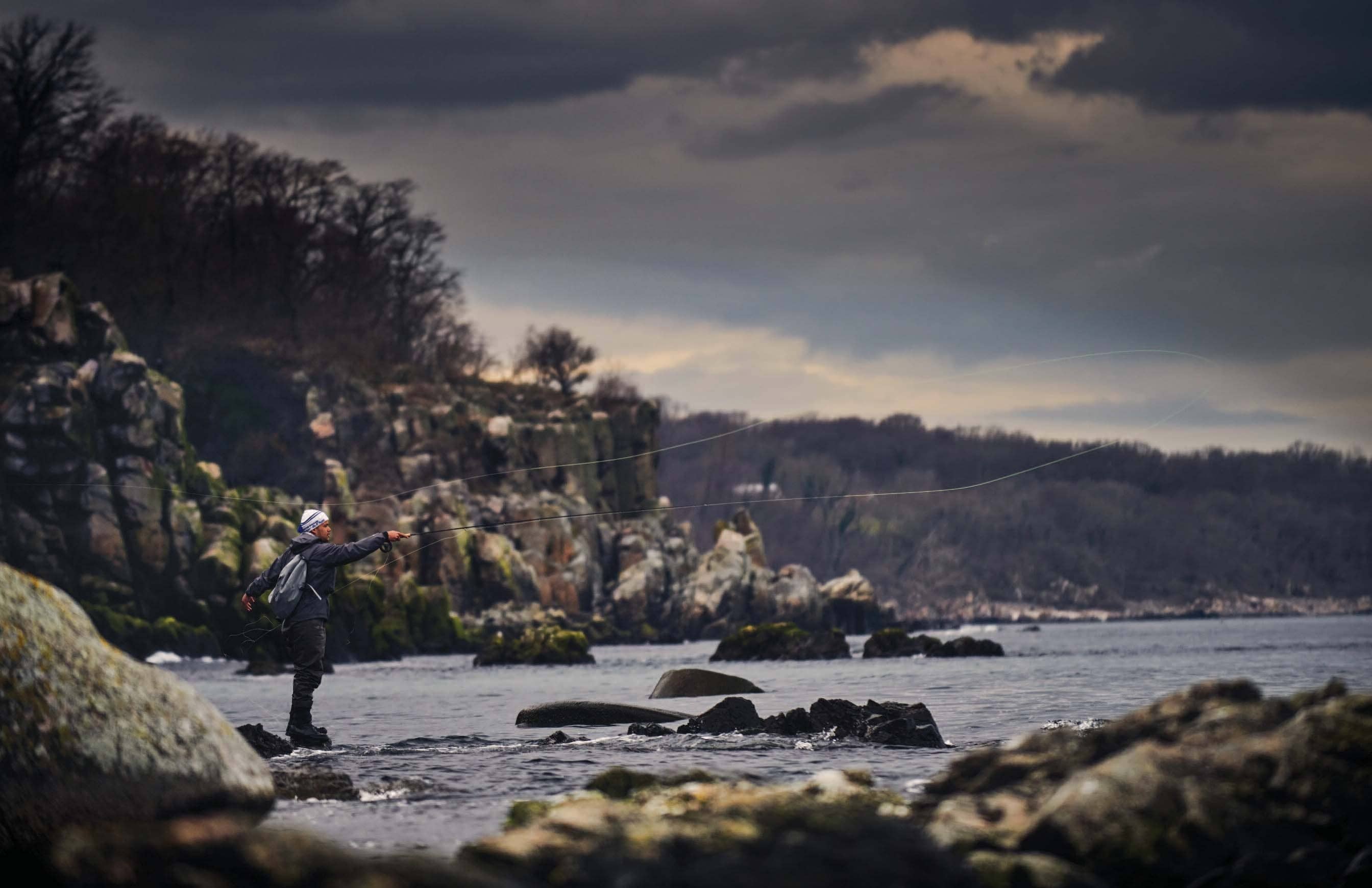 Why travel all the way to the island of Bornholm to fly fish for sea trout when there are numerous other coastal areas all across northern Europe that are within closer range? Well, Bornholm has a certain je ne sais quoi, and not just when it comes to the fishing, which, by the way, ranks among the best in the world. With its small, idyllic seaports, captivating panorama views and exquisite food culture, Bornholm is an ambient and pleasant place to vacation. Everything is within immediate range: the rocky shorelines and white sandy beaches, Svaneke Brewery and the many local smoke houses, the ancient round churches, fortresses and castle ruins, and the numerous vantage points found along Bornholm’s 158km-long coastline. Bornholm is the perfect place for an active holiday and its coastal realms offer the perfect playground for the sea trout fisherman – a place where the dream of catching a silvery Baltic Sea trophy is within reach.

My obsession with sea trout has lured me across the Baltic Sea to the craggy shorelines of Bornholm on several occasions. And revisiting Bornholm’s amazing and varied coastline always makes me tingle expectantly within. I have that exact feeling inside on this day in March, having flown from Oslo to Copenhagen, then driven from Copenhagen to Ystad in Sweden to catch the high-speed ferry from Ystad to Rønne, Bornholm. Not even escalating southwesterly winds forecast to reach gale force around 24m/s within 24 hours is enough to dampen my spirit.

Less than half an hour after my good friend Gordon and I have gotten off the ferry we’re on the shore of a beautiful coastal stretch with our fly rods firmly gripped, ready to battle the elements and look for trout. We fish one promising stretch and then another, but without seeing any fish. It doesn’t deter us because Bornholm’s sea trout have a tendency to school up in certain areas and once we find them we know that we’re in for a good time. Arriving at the third fishing spot, which goes by the local name Klympen, we’re still fully motivated and stoked to be fishing. And we now start to work our way down the shoreline, methodically and with great focus.

I send another expectant cast towards the edge of a dark patch that stretches out into the ocean below the lead-grey horizon, while desperately probing for traction across the rocks that are so carelessly strewn here – rocks that are greedily licked by unyielding and turbulent waves. The water is turbid and the southwesterly tears at the frothing wave crests flinging myriads of water drops into the air. It’s not the most comfortable weather for fishing. It’s more like an inferno of water, wind and whirling foam, but it doesn’t really matter. I don’t mind being thrown around in the waves on this chilly spring day, hectically waving my fly rod in the howling winds as long as I believe in the dream of catching a solid piece of Bornholm silver. I firmly do and every cast is laden with the greatest of expectations and the assurance that Bornholm is capable of delivering fish in regular trophy sizes. 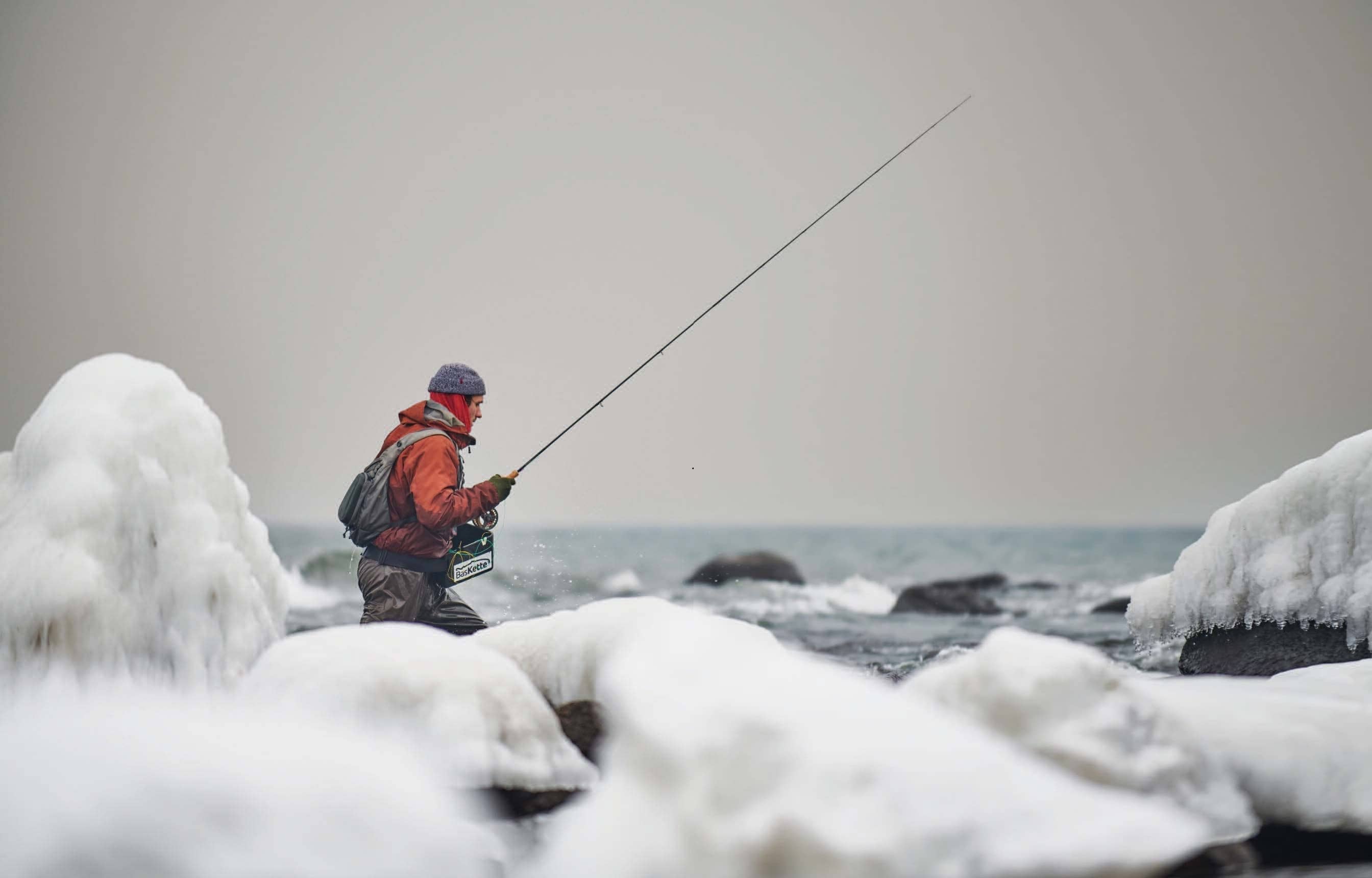 I retrieve the fly – a small but eye-catching pink shrimp pattern – with slow strips without ever losing contact with it in the big swells. At the end of the retrieve I lift the line partially off the water, roll cast and execute an overhead cast with maximum power, making the line cut surgically through the wind and stretching the leader over the colliding waves. Three strips later, a slight tug propagates through the line. I lift the rod resolutely but am not met with any weight. Hmmm, did the fly just bump one of the big boulders out there? Was it temporarily snagged on drifting seaweed or was it a cautious take? I quickly retrieve the fly and check it. Nothing. I cast again and immediately start stripping in the fly. This time there’s no doubt. Another vague tug on the fly line, and as I lift the rod I’m met with the weight of a big fish that starts thrashing around on the surface. The fly, however, quickly loses its hold, the connection is lost and I’m left there in the waves, lightly trembling and with a nagging uncertainty. Was it one of the many post-spawners so frequently encountered during early spring? Or was it one of Bornholm’s sought-after chromers – one of those prime creatures with shimmering loose scales, a muscular body and bright silvery flanks? The fish was way too far out and everything happened too quickly for me to ascertain for sure. Damn. 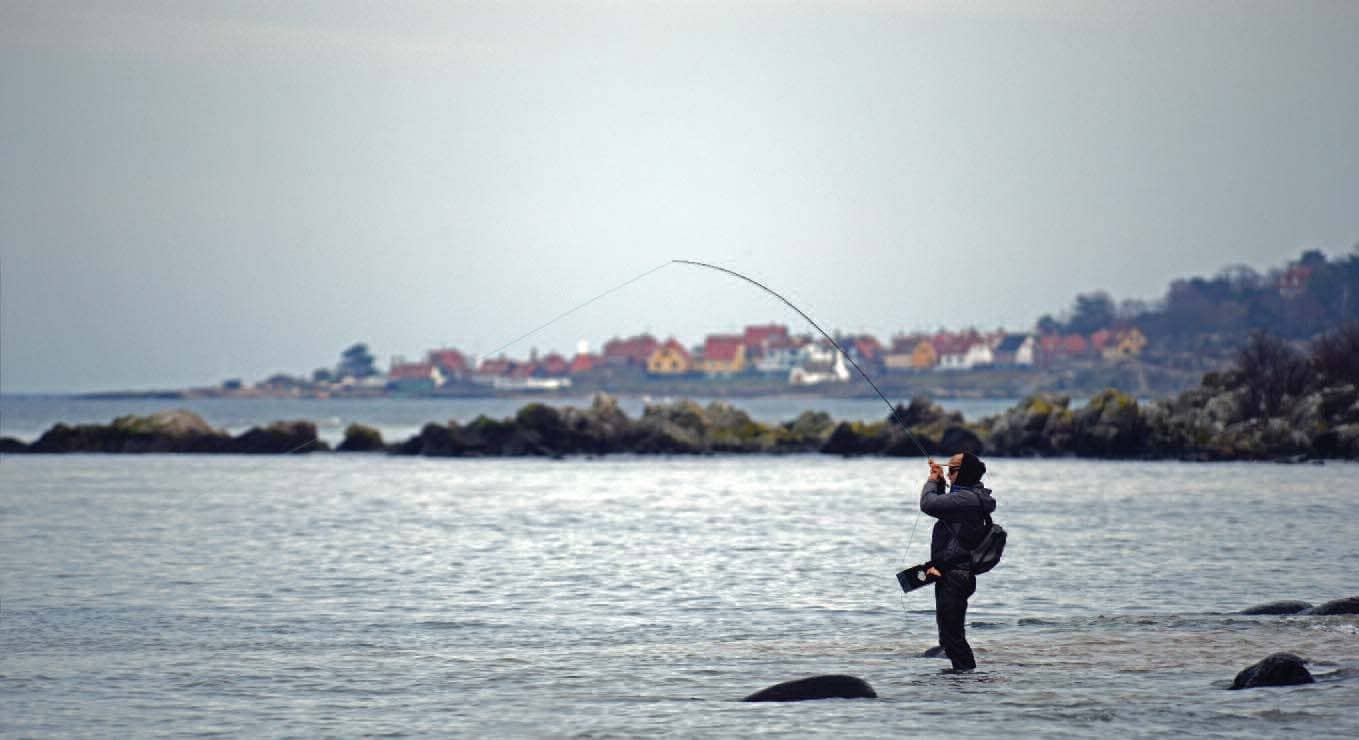