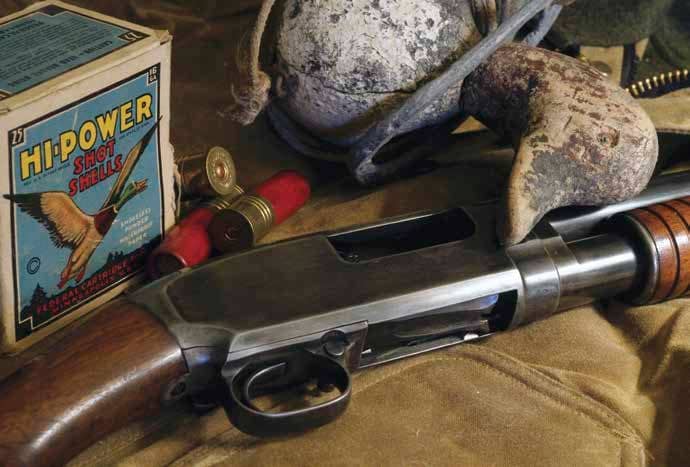 The all-American pump gun (in this case, a 16-gauge Winchester Model 12) is one of the most versatile hunting arms ever made.

When I first met Clare Irwin, I had no idea of the lasting influence he would have on my life. He was a small-town bank manager who was also a life-long deer hunter. He inherited hunting from his father and passed it along to his son – learning from one, teaching the other – and through a combination of circumstances, ended up teaching me, too.

Clare was a devotee of the Winchester 94 and was rather a connoisseur of rifles. All the evidence we needed was the fact that his 94 had a Lyman tang sight. This showed great sophistication. Clare had been hunting so long, and taken so many whitetails during the milk-and-honey years between the big fire of 1917 and the whitetail drought of the 1960s, that no one questioned his credentials as a hunter. Also, the fact that both his rifle and its “exotic” tang sight had barely a trace of bluing left was proof that they had spent many long days (and more than a few nights) in the woods.

This was in the mid-60s, and of all the deer rifles I ran into back then, I remember only one with a scope on it. This was a Remington Model 742 belonging to a railroad station master who was rather a prominent citizen. The rifle had barely a scratch, and its proud owner was fond of telling everyone where he bought it, how much he paid and how the scope made all the difference. He’d never sighted it in because, he said, the scope had been put on for him by the guy at the store, and “he knew what he was doing.” This worthy praise was generally regarded, privately at least, with something approaching scorn.

Aside from his 94, Clare Irwin’s only other gun was a pump shotgun, and all I remember for sure was that it was a 16 gauge. Given his regard for Winchesters, however, I expect it was a Model 12. Like its stablemate, its stock was rubbed smooth and the bluing was gone just about everywhere. Like the 94, there was nary a speck of rust nor any pitting to suggest that rust had ever afflicted it in the slightest. Both were exceedingly well looked after and exhibited a self-confident slickness.