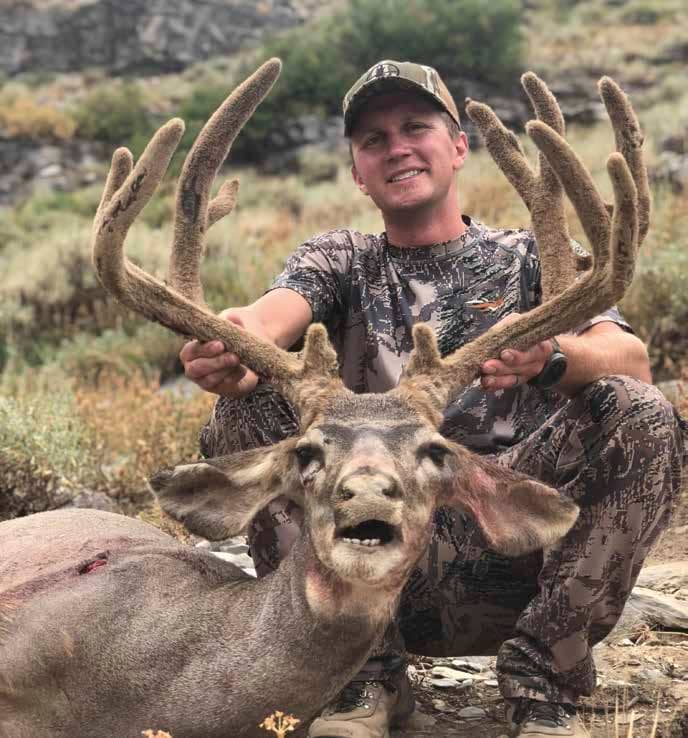 Bowhunter’s First Deer is a Dandy

Corey Hibbard had been watch-ing a mule deer all summer, keeping tabs on it when scouting. Add to that the multiple photos captured of the buck on trail cameras, and a tree stand was set up with the hopes of hunting in late August. Set upon an opening morning for a 30-yard shoot, Corey said six small bucks had come through first, and if the hunter hadn’t known that a big deer had been hanging with the smaller bucks, he might have taken one of the younger deer. The bowhunter remembers being patient but shaking like crazy while he waited, suffering from buck fever.

As if planned, Corey’s big buck came out after the others had already shown up to visit the lick. The bow hunter’s first shot was a little low, and the arrow shot right through the buck, sending it running off. Corey waited patiently in the tree stand for 45 minutes, thinking to himself that he had missed, which was driving him crazy. When the hunter finally crawled out of the stand to find his arrow, it had light-colored blood on it, indicating a paunch shot. Corey started to track the buck and made it to an open face where all the bucks from the lick were about to go into the trees.

While walking across the face, Corey looked down the steep hill and spotted the buck standing in the bushes, starting downhill. The hunter put a stalk on the buck, got within 50 yards and released another arrow, hitting the buck in the right shoulder, which made it run farther down the hill.

The strange twist to this story is that Corey had left work that day and went straight to his camp set up in the high country. Cruising on his dirt bike, he had a pack strapped to his back with a bow and four arrows in the quiver. While riding up the trail, Corey ducked under a tree and ended up breaking two of his four arrows.