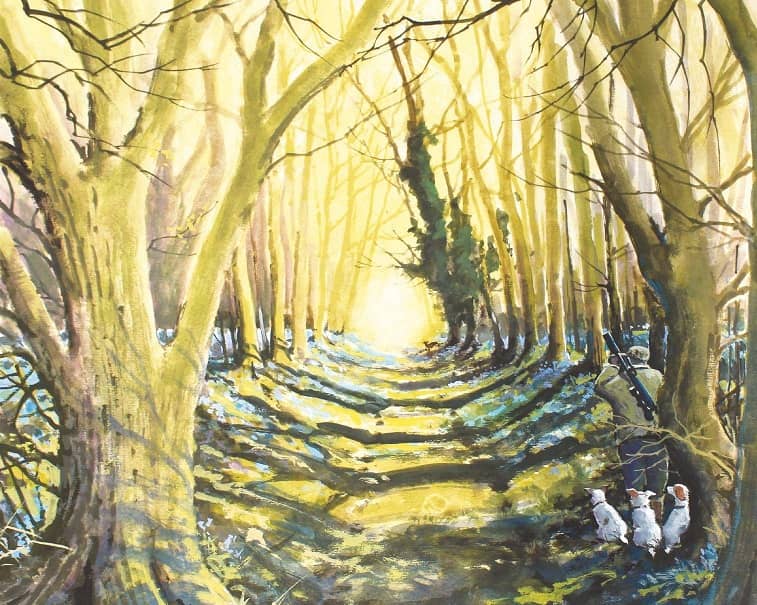 Christmas Day 2017 was unexpectedly eventful. I cooked lunch for inlaws and outlaws, gifts were exchanged and champagne consumed, nobody suffered from food poisoning but none of this was the big surprise — that took place on our afternoon perambulation around the woods.

Walking off the turkey and (perfectly cooked) roast potatoes, the excitable knot of terriers, expanded by visiting family hounds, eagerly flushed an unfamiliar form from a patch of tight bramble cover. It was not the expected cock pheasant; instead, a coppery flank surged across the ride and away into the tidied lines of wintery coppice opposite, into and out of sight in a handful of seconds. It was smaller than a roe, moving slightly like a hare but much too large. My wife, mother and I all had one word on the tip of our tongues, but all initially resisted letting it out for fear of appearing foolish — muntjac.

I’d observed and pursued muntjac in a few places before; some of my stalking friends considered them fine sport and even better eating. Some of my landowning friends think they are the worst thing in Christendom. Suddenly, it was time for me to join the narrative and make my own conclusions — they had arrived.

During the next 18 months, I became closely acquainted with these feisty little invasives. With more than 30 years of immersion around my local roe population, the new kid in town was providing a hard apprenticeship for me, with the rapid realisation that everything I knew about deer was actually everything I knew about roe and fallow. The novel and mysterious muntjac were so different, moving constantly and apparently active through most hours of daylight, spending 99% of their time in thick cover, and only appearing to whizz across woodland rides or, even more rarely, out in fields.

Lazy evenings stalking roe around standing crops and arable hedgerows were replaced with holding up on a ride and waiting to ambush a passing muntjac, reconnaissance with thermal and trail cameras a vital ingredient for success rather than slowly glassing the vistas with binoculars on an educated hunch.

The actual shooting wasn’t without challenge — ranges were often far shorter but opportunities fleeting. Aiming points were rather different for far smaller beasts, which seemed to bound along a wave of energy rather than carefully walk and browse on slender extended legs. Ranges were also difficult to estimate and, at first, the working approximation of “roughly the size of a collie dog” didn’t make the eventual shot any easier to visualise.