Make The Most Of The Shoal 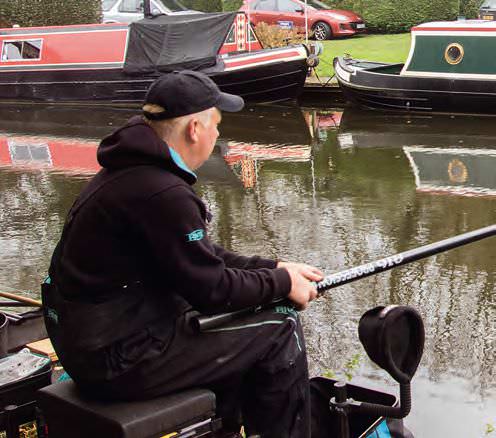 Rive’s Simon Willsmore looks at how to catch quickly and keep them coming on the canal in the cooler months when there are fish in front of you.

As less and less boat traffic passes through our canal system as the warm weather leaves us behind, the water becomes crystal clear, and as a result the silverfish start to shoal up as a means of protection against predators. Swim selection becomes a lottery if you are looking for a good day’s sport on the cut, and when it comes to a match, you are either on them or you’re not!

One positive, however, is that although many of the boats are moored in marinas, you will find parts of the canal where they line the far bank. The extra cover that they provide is where you are most likely to find a few fish. Also, if the fish are there in numbers, they often give themselves away when the odd one tops as it investigates a possible morsel of food.

That last clue was clearly the reason why Rive’s Simon Willsmore chose his swim when we joined him for a session on the Grand Union Canal on Dickinson’s Pound near Watford, in Hertfordshire. The fact that there were also a number of boats moored on the opposite side was also a factor.

“It’s always a good sign to see fish topping when you arrive, as it’s a clear indicator that there are fish in the area,” he pointed out, as two fish splashed to his right.

Simon then went on to explain that his plan for the session was to catch fish early on a short line, while keeping a longer line primed, closer to the boat across from him, so that he could look to fish there once the first line started to peter off.

When the water is clear, I find it’s best to try and start short, even if it’s only for a limited period,” he added. “It’s possible to catch a lot of fish from the near shelf, and the longer you can leave the far line it allows the fish to gain more confidence the feed over the groundbait.

“I plan to keep it simple today and will be looking to catch quality fish on the bottom, so I want to try and focus the fish there. In the past I have found that they will feed on the deck more readily when the water is clear.”

He then added that he would fish punch short and pinkie over groundbait long, and with both lines he would fish away from the deepest water, as now that the boat traffic had lessened a lot of rubbish would have accumulated in the main channel, and he wanted to avoid the mini snags and leaves that had collected there.

“There’s a little natural left to right flow on this section of the canal, as it’s fed by a small river, so by keeping clear of the deep water I know that I will be fishing over a clear bottom,” he pointed out. “This part of the canal runs through a chalky area – the river close by is classed as a chalk stream – so there’s only a light covering of silt on the bottom here too, so even if a boat does come by today it’s unlikely to cause much disturbance to the water colour.”

Simon had set up two rigs for his punch line. The first consisted of a 0.5g Rive 243 pencil-style float, set on 0.10mm Rive Power Rig mono, and it was shotted with a bulk of seven No10s, plus trimmers, and two No10 droppers. The hook length was 15 centimetres of 0.08mm Rive Hooklength mono and a size 20 Kamasan B511 hook. The second rig was a lighter version of the first, which had a 0.3g 243 float with a bulk of four No10s, plus a No11 and trimmers, and three No11 droppers.

Both rigs were attached to solid No4 Rive elastic and plumbed up so that they fished six inches up the nearside slope, away from possible snags.

“I will start on the heavier rig but switch to the lighter one if I find that the fish get a little finicky, and I start to miss bites,” he pointed out.

Along with the two pole rigs, Simon had also set up a 4m whip for the punch line and explained that it’s a good option if you feel that the fish are put off by a pole tip hovering above their heads. He also added that it’s better to use a longer whip so that you are not reaching to stay in contact with the float.

“It’s doesn’t hurt to fish with a slightly slack line if you are able to sit comfortably on your box,” he explained. “The extra line also enables you to swing the rig out, beyond the feed, and then draw it back so that it settles on the slope with everything laid straight out. The other advantage is you are able to keep the tip away from the catch zone.”