Sticking It Out In Prime Conditions Yields A Giant 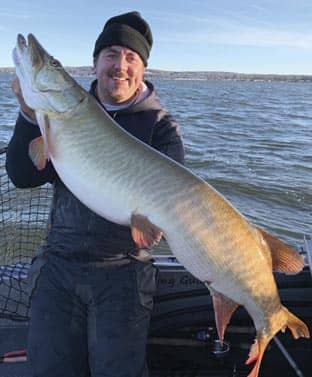 Memorable catches stay with you, and I can think of a few, like the Immaculate Reception. Or pretty much every catch I made in high school and college. And of course, one particularly memorable musky catch.

All musky catches are special, but this one sticks out. It was last November. Chautauqua Lake was experiencing some beautiful weather for fall — but there was something of winter in the eyes of the musky.

It was my dad’s birthday, so I took him fishing. A cold day, but I put up the Bimini top with the full enclosure to keep the elements at bay. November fishing tests your patience but eventually he was reeling them in. I felt good that he was able to catch some muskies on his birthday.

The day started winding down and my dad suggested we troll back to the dock and call it a day. “Let’s stay a little longer. You never know what could happen,” I said.

It was a good thing, because we caught three in a half hour, all hitting the same five-inch Baker Bait. But I still felt unfinished. Something was out there.

Then, just as our time was about up, we heard an unbelievable scream as the drag went off. I knew this was the monster to end on, if we could net it.