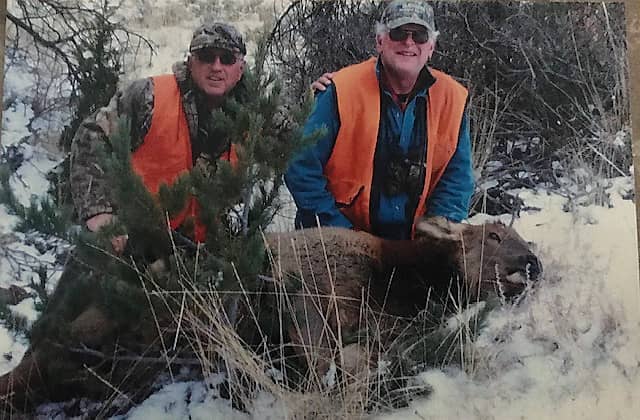 Since before our first hunting license, we have been told over and over that detailed planning, lots of scouting, and practice and more practice with your favorite gun or bow would lead to better hunts.

Maybe a dose of good luck is also needed to help with travel and hunting weather. Not only is quality hunting based on these factors, but I believe old-fashioned superstition and folklore play an important role as well. A convenient definition of superstition is: belief in the sign of things to come. Folklore’s definition simply ties beliefs to specific groups of people. Sounds a lot like hunting in America to me. To use folklore to advantage, hunters observe the signs of Nature’s participants and assess their power(s). Whoa now, before you disregard my contention without reading another word, let me say this: By telling a pretty darn good hunting story, complete with observations of a few of Nature’s signs and powers, I expect to make my point. Are you wondering, maybe just a little, how I might pull this off? Ok then, read on and let’s get to my story.

During the 2011 general hunting season, this very true hunting story (not all hunting stories are true you know) occurred mostly in Hunting District 380, in the Elkhorn Mountains, well-known for trophy bull elk. However, since neither my brother Bill nor I drew those coveted tags, we decided to hunt brow-tined bulls on opening day in an adjoining district. Despite hiking several miles, hunting our secret hot spots, we did not see any elk and found little elk sign (tracks, beds, or fresh manure). We knew hunting the Elkhorns next made sense, because I had a spike bull tag, and Bill had a cow elk tag he had drawn. After two days hunting the south end of the district, Bill and his tag went home to the Bitterroot Valley; I still had mine too. He returned in two weeks on a Tuesday to take advantage of less mid-week activity on public land. Even though I hunted the area twice during Bill’s absence with little result, when he returned, we decided to try the south end again.

We started our hike into fairly open drainage well before daylight, then scoured the canyon looking for fresh sign. With 4-5 inches of fresh snow, we knew if there were any elk, we would find them. No elk sign usually means no elk, and it did that morning. However Bill decided to hunt out to the mouth of the canyon, so I returned to our vehicle to drive around and pick him up. After a 40 minute hike and a short drive, I parked where I knew Bill would expect to find me and began a 30-minute wait.

Now with time on my hands, superstition, folklore, and observation of Nature’s participants makes an appearance.

As it happens, I like to read Western paperbacks (the older, the better), particularly on sunny September days during archery season, because it keeps me on stand longer. Consistently, Western authors describe efforts to better understand Nature and all of her players, to improve communications with Mother Nature herself. Over the decades, folklore has influenced our thinking about Nature’s players. Many are animals, including fish and birds, but plants, clouds, and even an earthquake can play a role. For example, a coyote is assumed to be either wily or on occasion, a comedian, everyone knows squirrels are industrious, and the sharp-eyed hawk is frequently all-seeing, sometimes all-knowing. And lightning strikes usually mean somebody above or below is not happy. With this background, I knew it was my job (ok, I just made it my job) to observe Nature’s activities and interpret the impact on our hunt.