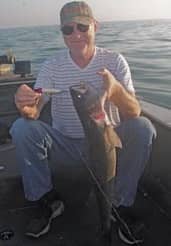 I opened the old metal tackle box and took a long look at its contents. After some thoughtful deliberations I removed a handful of ancient lures that had been relegated there for the last 60 or so years, give or take a decade.

Recently I had re-read, for the umpteenth time, Book of Lures by Charles K. Fox. The late Mr. Fox wrote his angling book about the many varieties of lures that existed in his day and how they were best to be employed. In it are many stories of his piscatorial pursuits in the Kawartha Lakes that took place back in the 1930s and ‘40s, and the lures and conditions that he fished them in. The book was very well written, and Mr. Fox had a true gift in being able to connect with the reader. I have never forgotten his shared wisdom, or the lures that he so confidently endorsed, and I made a promise to myself that someday I would give them a chance to weave their magic once more.

Lake Erie had been kind to anglers this past summer with an overabundance of hungry walleye eagerly waiting to pounce on any artificial that came within striking distance.

To me it seemed like a most opportune time to test these old baits that anglers held in such high esteem back in a day when a loaf of bread cost a dime.

My brother-in-law George Selby raised an eyebrow and gave me a wry smile. “Is that a Heddon Vamp”?

I nodded my head and informed him of my forthcoming test.