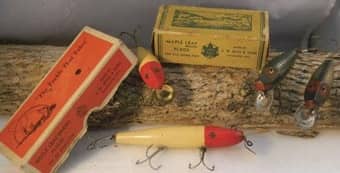 Samuel Wilson Ellis was born on the 4th of March, 1879, in Trent Bridge, Ontario, to Luke and Sarah (Hardy) Ellis.

A 1901 Canadian census listed Samuel, then 22-years old, as a general labourer. On December 23, 1909 Sam married 18-year-old Edna Mae Pollock. Edna found employment as a postmaster in the hamlet of Trent Bridge and Sam supported her and their seven children as a house painter.

A local lodge owner, Thomas Wight, who owned T. Wight & Son (a company that manufactured fancy flies and tackle and was known locally as Wight’s Flies), hired Samuel to work for him. Sam Ellis became plant foreman for the Canada Fishing Tackle Makers Ltd., a company created by the Wights in 1915 and situated on Cedar Isle. In 1923 Ellis had three registered industrial designs for his own metal lures. Wm. Croft & Sons took over the Wight’s company and moved it to Havelock in 1923. Sam was hired as manager of this tackle plant.