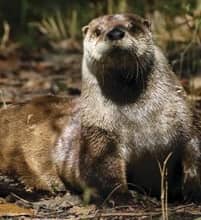 (Lontra canadensis) My canoe was gliding slowly and quietly along the shoreline when I heard a “ccchhh” sound slightly behind me.

I turned and found myself face to face with an otter, or more precisely, a North American river otter. I imitated its call and, for few brief moments, the otter’s curiosity got the better of itself before it decided I was no longer interesting. It dove and, despite my best efforts, I could not find it again. I was disappointed to see it go.

Such chance encounters with our continent’s third largest weasel (only the sea otter and the wolverine weigh more) can be rare. I say “can be” because in some marinas where anglers regularly clean their fish I’ve known otters to show up every day. Sometimes they’ve even entered the boats looking for food. Rare or common, these meetings are usually treasured.

River otters may look sleek as they glide through the water but on dry land they are revealed to be fairly stocky animals. They can weigh between 11 and 31-pounds with males averaging about a third larger than females. In length they can reach between 26 and 42-inches. They are carnivores and belong to the Family: Mustelidae. Worldwide there are 13 species of otter. Only two species are found in North America; the much larger sea otter being the other (see next issue’s Water’s Edge).