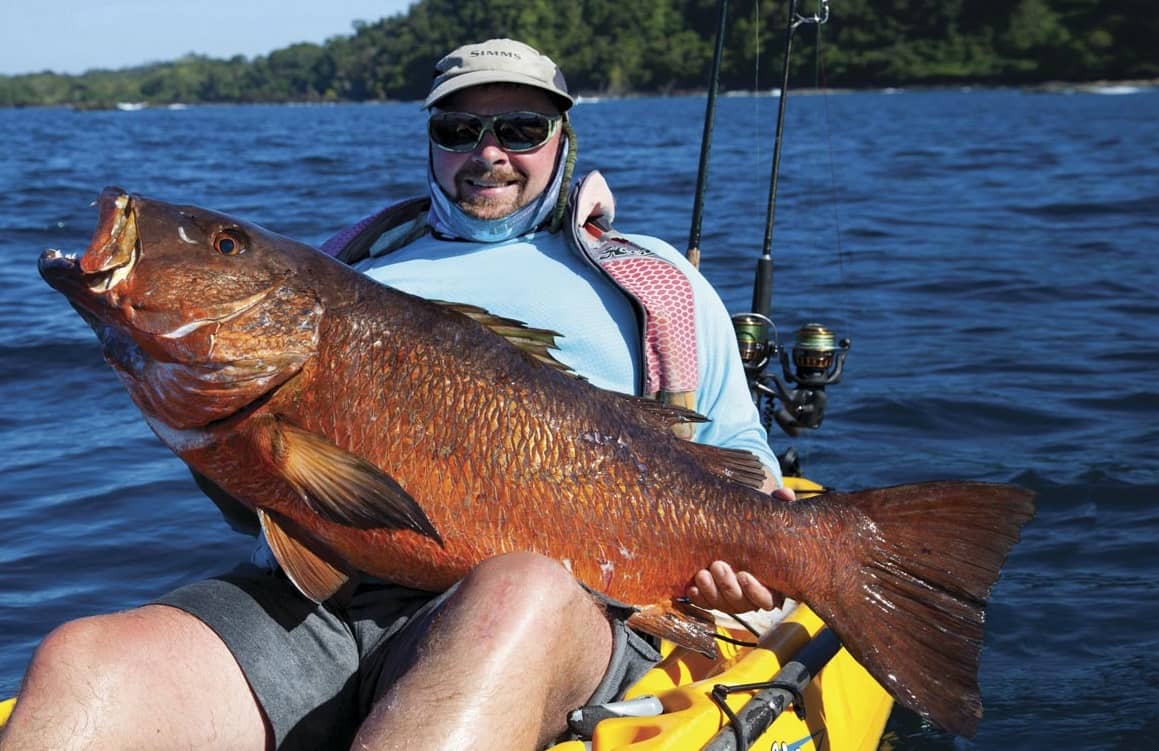 Having had my kayak launched from the mother boat I began to pedal it toward one of the many rock outcroppings that lined the shore. Almost within casting range I stop pedaling and let the kayak slowly glide forward. Stealth is everything; experience has taught me well.

Loading my rod tip, I begin to assault the rocky outcropping with the longest casts that I can muster. My six-inch popper lands on the ocean surface with a loud splash. Immediately I begin popping the bait as hard as I can. It is crucial that a popper creates as much splash and sound as possible to draw up the monsters from below.

After my third consecutive pop something big boils up under the popper and the lure vanishes into a large mouth adorned with giant teeth. Down towards the reef the fish dives, and the fight is on! Big cubera snappers are the brawlers of this salt water world. There is nothing graceful about them whatsoever. They are on a mission to drag you down to their rocky lair, to sever your line and pull your hooks straight. Your job as an angler is to apply unrelenting pressure on them, and to hope that the trebles hold.

After 10-minutes of battle, which can only be described as an all-out tug of war, I slide my hand under the gill plate of the largest snapper that I have ever landed. It felt as though I was in a wrestling match with a small dinosaur!

After snapping some quick photos I can’t help but marvel at the carnage lying between its large, canine teeth. Some of the tines on the treble hooks are almost completely straight and the heavy plastic popper is completely punctured. The bait is now completely waterlogged and useless.

Watching the big brute swim downwards, back into its rocky fortress, I can’t help but feel that I have wrestled a giant and won!

For me there is nothing better than kayak fishing, and there is no better place to do it than through Panama Kayak Adventures. Situated on Panama’s wild Pacific coast, angler parties of four to six-anglers per week get to experience the fishing trip of a lifetime. 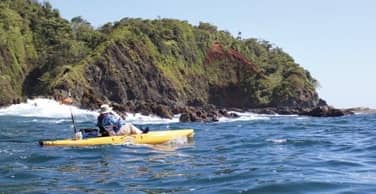 The fishing along Panama’s Pacific wild coast is outstanding and much of it can be done at water level via pedal-driven kayaks. Early in the morning the kayaks and anglers are loaded onto the custom built, motorized, super-panga mother boats. Once the guides have transported you to the fishing grounds the kayaks, with their accompanying anglers, are launched into the open ocean.

Each angler has both a jigging rod and a casting rod. Heavy duty live bait rods are given when live bait is secured by the guides throughout the day. There is a fishing period in the morning and then again in the afternoon. The two fishing periods are broken up only by a scrumptious lunch back at the lodge or along the shore.

On this type of trip it is also possible to be dropped off along the shoreline to do some casting along the coast. The shoreline is riddled with small freshwater streams that attract a plethora of saltwater species, including world record sized Pacific snook!

In addition to this shoreline fishing opportunity, rods are often brought to the surf in the evening, right in front of the lodge. Here it is possible to catch a range of species, including sharks.

There are a tremendous number of fish species along this coast. Trophy-sized roosterfish and cubera snapper call these waters home. The large size and numbers of these fantastic brawlers are kept at a premium through strict policies of catch and release. Cubera snapper well over 50-pounds, and roosterfish over 60, are readily available. Hooking either of these saltwater gladiators will put the angler, and their respective gear, to the test. It is important to note that both of these dynamic predators always make their presence known when it comes to the official listings of saltwater’s strongest fighters.