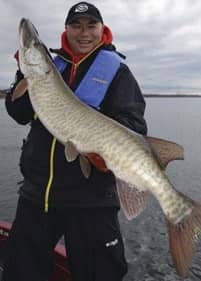 The mere mention of the name, Muskellunge, is enough toget most anglers’ blood racing.

No other fish is surrounded by as much myth and mystique as the muskie, nor is any other fish as revered in angling circles. It’s no wonder when you consider that, next to the sturgeon, the muskellunge is Canada’s largest freshwater fish. Muskies in excess of six-feet long and weighing over 100-pounds have been reportedly found in nets, washed up on shore etc., but details on these monsters are sketchy at best. Anglers commonly catch muskies between 30 and 45-inches that weigh between 10 and 25-pounds. The current all-tackle world record, as listed by the International Game Fish Association (IGFA), stands at 67-pounds, 8-ounces and was caught in Wisconsin in 1949.

The muskie’s colour varies with its location and individual fish in the same waterbody can show distinct differences in appearance. In general, muskies have darker brown to black markings on a lighter greenish, green-gold, brown, gray or silvery background. The markings can appear as spots, bars, blotches or a combination of shapes. The belly is cream to milky coloured with small brown to gray blotches.