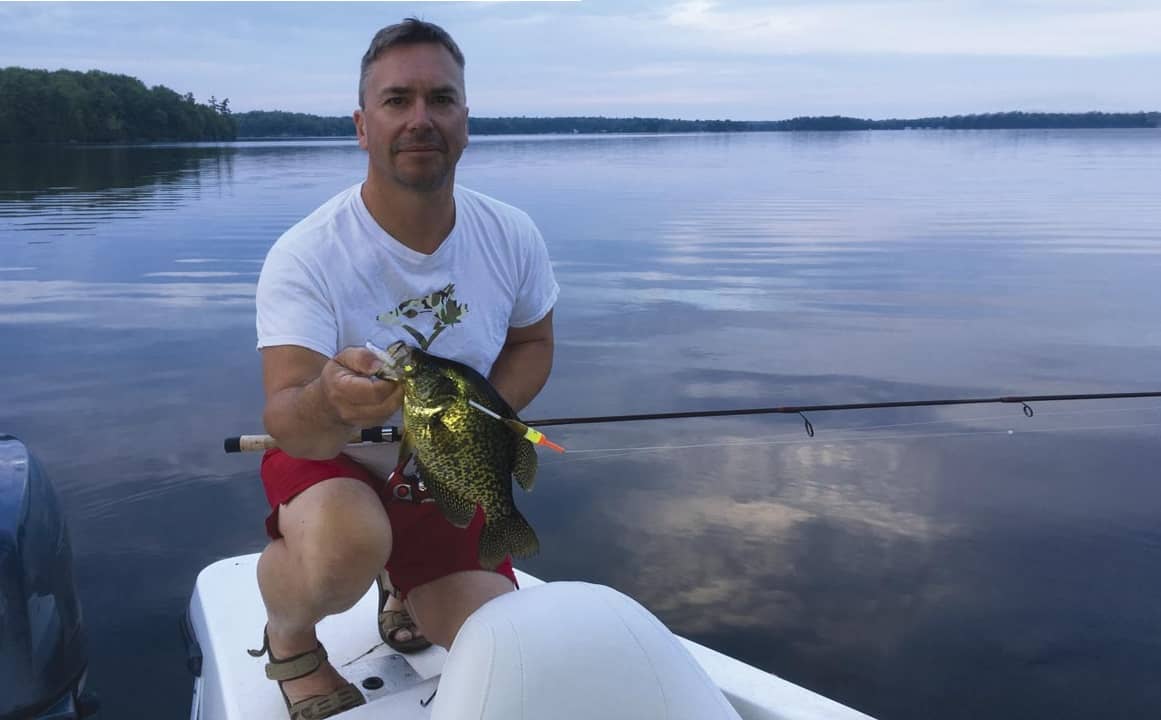 It is hard to say anything negative about the black crappie. Here’s a fish that has a good attitude about hitting live or artificial baits; that presents a bit of a challenge to land thanks to a papery mouth; that schools strongly so good numbers can be taken; that provides a lot of meat for its length and that rivals or beats yellow perch, walleye and anything else you care to suggest as the best-tasting freshwater fish. Probably the only thing any of us will complain about is that they become elusive after the spring spawn.

Geoff Coleman
Most years, by the second week of May in southern Ontario, crappie will herd into the warmest water in the lake, waiting for perfect spawning conditions. This pre-spawn period can be a notoriously fickle bite. Many times you will happen upon immense schools of indifferent fish in a creek arm or a sheltered, shallow bay waiting for the green light to start spawning. The next day they have disappeared, maybe drifting out to the main lake again, or hiding in weeds.

The strangest behaviour is when you find them evenly spaced horizontally across a canal, just below the surface, all pointing the same direction as if they are an army awaiting inspection. Crappie like this are nearly uncatchable since any bait sends the eagle and osprey-wary fish scattering even before it hits the surface.

Luckily, during and after the spawn - initiated when the water temperature reaches about 15°C - things improve considerably. Now, male black crappie occupy river backwaters or littoral lake areas to build their nests, typically on or near vegetation beds on a mud, gravel, or sand bottom. The eggs hatch in two to three-days and, like the smallmouth bass, the nest is guarded by the male until all the fry leave the site.

Also, like the smallmouth, they become ridiculously easy to catch as the males aggressively run off any fish, bug or crustacean they think might be a threat to the eggs or hatchlings. This is the time when most people catch their crappies.

We fish them in sheltered, south facing bays and creek channels, near emergent vegetation like bulrushes and pencil reeds, and avoiding sites with a lot of submergent aquatic vegetation if possible. Experts say stemmed vegetation gives predators fewer hiding places than submergent weeds, making it easier for males to defend the nests.

But, once the fry are on their own, the adults will migrate out of the bays in search of their main food source. Forage fish account for 88% of the total food consumed by volume for crappie over 20-cm in length. As they leave these confined areas so do most anglers, turning their attention to the now-open walleye fishery. Crappie are often forgotten until hard water, or the following spring. And that is kind of a shame.

Crappie remain willing biters all year, and they set up in a predictable summer pattern that holds until water temperatures drop. And, many of the baits and gear you used in the spring can be repurposed at this time of year.

To guarantee summer success, rule number one is to fish a lake with a healthy crappie population. It is easy to think a lake is filled to the gills when half the lake’s population is crammed into a couple of back bays each spring. However, spread those same fish out over the entire lake and it may not be the fish factory you thought it was. In broad strokes, if the lake supports a winter fishery, you can safely assume it will hold up in the summer. Black crappie also do well in quiet, sluggish rivers with a high percentage of backwaters and cut-off areas.

In terms of lakes, they prefer them small to medium-sized so it shouldn’t come as a surprise that rule two of the most resilient summer pattern dictates that you find shallow water in a small to medium-sized lake or lazy river. In fact, forget any water over 15- feet deep. The same experts mentioned above tell us that the majority of crappies live in 15-feet of water or less until water temperatures fall below 10°C and they start to search out their winter holes.