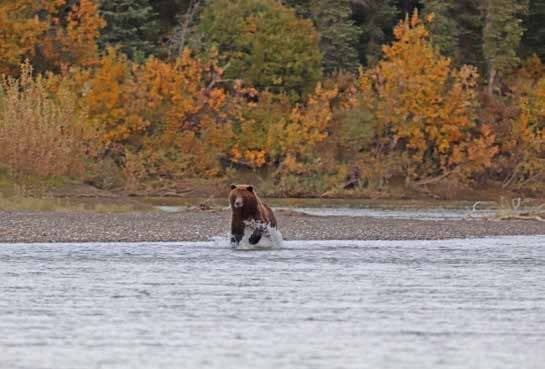 Do-it-yourself Alaskan arctic bear hunt amongst friends. You can do a lot right from camp.

People think I’m crazy; family members, friends, even strangers have told me so. I’m originally from Oklahoma and people back home just aren’t used to the Alaskan way of life. They think I’ve lost my mind. You think it would have something to do with living in Alaska, roughing it out in the Arctic, where cold and darkness are a normal way of life, but it isn’t. The thing they can’t comprehend is my infatuation with hunting bears.

I haven’t always had it, but over the 20-plus years I’ve been in Alaska, it’s become an increasing craze every year. It’s not only me. My best bud Lew has the fever as well. We just absolutely love it! There is no simple reason why. I guess the passion came from a procession of time and places, even certain circumstances that brought us to what is now a serious addiction.

In the old days, seeing a grizzly was like seeing a ghost or some kind of alien being, especially during the spring months. Fall was a little different, seeing a bear was more common, especially along the rivers and streams where the fish came to die. I remember how amazing it was for me personally to see a bear. Far off in the distance usually, but it was still amazing.

Things started to change several years ago when our trips each fall for moose and caribou became bear sightseeing tours. Most of those sightings occurred in places where we hadn’t seen bears before, which we thought at the time was very cool, minus bringing any meat home.

Those weekends were epic, with Lew and I boating north across the sound, making our way up the river past the sand bars, through the canyons into what was once legendary for caribou and moose. We stayed at our “base camp,” due to its centrality in what used to be a game-rich environment. Base camp was nothing but an old abandoned park service cabin that had been left to rot. Its foundation had slipped, leaving it on an angle, and the roof leaked profusely. But it had four walls, with a table and shelves built into the walls, plus a couple of wood slabs for bunks. We fixed it up a bit, with a wood-burning stove and a reclining chair Lew had brought from home. It wasn’t the Hilton, but it was comfortable.