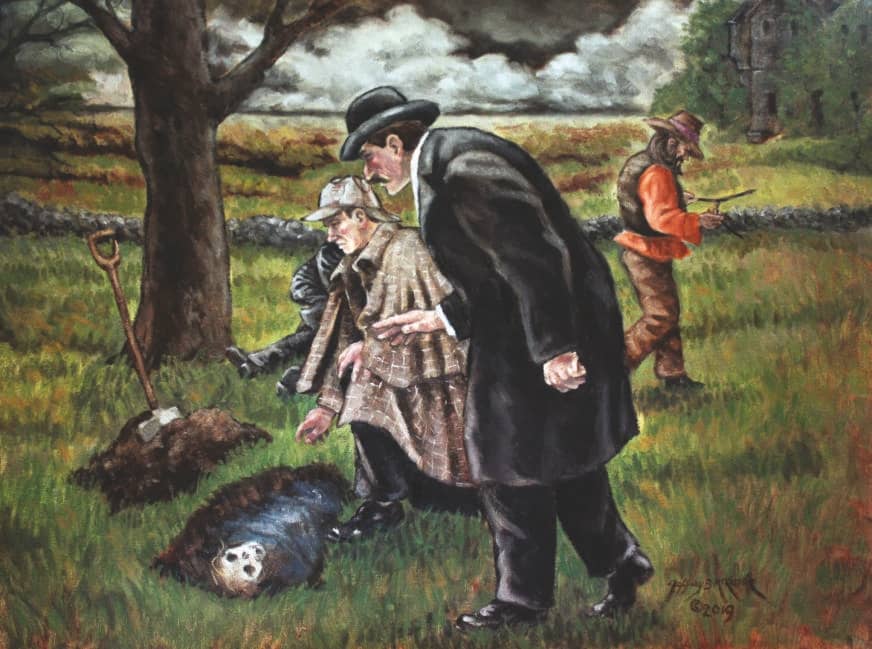 “IF you don’t mind, sir,” said old Fiedler as he finished pouring our coffee, “I’d like to go into the village this morning with the others. It’s market day.”

Our host, Squire Boone, belched politely and raised a good-natured eyebrow. “Whatever could tempt you to visit that cackling circus?” Fiedler looked sheepish. “It’s not so much the market, sir, as what’s happening nearby. There’s been work going on at Mr. Retford’s place, as you know, and today they’re going to be using a dowser—he’s that fortune-teller’s husband—to find some of the buried pipes.”

Holmes, sitting beside me and so far seemingly lost in his own thoughts, turned toward Fiedler with a sharp look of interest. “Really?” he asked. “So that’s still being practiced out here, is it? Ah, these charming West Country superstitions.”

Fiedler, unsure whether a response was required, stayed mute. Squire Boone, however, shifted in his seat with a smile. “Likely not just here, Holmes,” he said. “Scrape any of the settlements from Land’s End to John o’ Groats and you’ll find that our rickety civilization is only skin deep at best.”

“A curious way of putting it,” I said, “but true. To many, modern science is no more than a different way of trying to explain or justify those aspects of nature which just a few generations ago were credited to spirits and demons.”

“And angels as well, Watson!” said Holmes. “We mustn’t discount those advocates of the light!”

Squire Boone happily agreed that Fiedler could join the market party, and we were soon left with our coffee.

We were at the squire’s manor house near Sigford, on the eastern edge of Dartmoor, resting for a day or so after our recent exertions in the matter of the Down Ridge Circle, and the ancient blood ritual that we disrupted by the narrowest of margins. Holmes and I had journeyed there after receiving Boone’s urgent wire two days earlier. Suffice it to say, the mood of the house was considerably more relaxed than when we had arrived—due completely to Holmes’s masterful trapping of the madman Denton and the rescue of the crofter’s daughter.

Seeing Holmes’s apparent interest in the mention of dowsing, Boone stirred himself. “I wouldn’t mind watching it myself,” he said cannily. “Perhaps you’d both also like to make the journey?”

His offer was immediately accepted, and Fiedler was so informed. Not long after, the household departed in two wagons for the short journey across the moor. Along the way, the squire told us about the man whose house we were going to visit.

“Reed Retford,” he explained, “is the last of his line. The family made their money in shipping early in the century, and then diversified into other less risky investments. They came down from London and built a fine manor house on the moor, near the confluence of the three rivers— the high ground near the Sig, the Lemon, and Langworthy Brook. And there they’ve stayed, becoming more and more aloof as the years passed.

“Of the current generation, Reed was the older. Over a quartercentury ago, he married a beautiful French girl who quickly became despondent after leaving the vibrancy of her native land for this brooding moor. Her only bright spot—and it was no surprise to any of us in hindsight—was Reed’s younger brother, Stephen.

“He was always a wild one, vanishing for months at a stretch, traveling to London or abroad, or farther, and returning in the winter with a deep sunburn and tales of bright places and colorful experiences that could barely be imagined. This had always been his way, but after his brother Reed’s marriage to Célia, he stayed more than he wandered. As you might expect, they soon became devoted to one another—and Reed’s dour nature only further served to make his younger brother seem all the more attractive.

“The marriage hadn’t lasted much longer than a year when one day Stephen and Célia ran away together, never to be seen again. Reed Retford only became more withdrawn, dismissing what little staff he’d kept—all except for Dibrell, a scowling man who always had seemed old and bent, even when he was young. Reed used his influence to obtain a divorce, despite Célia’s absence, and the estate quickly declined into neglect.

“But six months ago, something changed. Retford has always been something of a philatelist—that’s the one subject in which he maintained any interest. I dabble in it myself, so I’m probably the closest thing he has to a friend out here. Not long ago, he began corresponding with Sir Henry Winewall, the retired London barrister, about their respective collections. I was invited to the dinner, shabby though it was, when Sir Henry came down to visit, and I saw the fires—which I’d never believed could be rekindled—when Reed met Sir Henry’s travel companion, his daughter, a widow named Helene.

“Well, the short of the matter is that Reed is now a man reborn. He found it in him to charm Helene, and she saw something that she liked too. She seems to be as attracted to this part of the world as she is to her fiancé—for she and Reed are engaged to be married next spring. And Reed has summoned the energy and resources to revive the manor for his new love.”

“And,” added Holmes with something resembling a sneer, “he is making use of a dowser.”

Squire Boone made a rude noise with his lips. “The people here are willing to believe anything. The Hound, as you know. The will-o’the-wisps and lights that supposedly lure people into the mire. One of those traveling fortune-tellers set up a week or so ago, and I hear that she’s had a steady stream of people willing to trade hard cash for vague assurances. It doesn’t surprise me that her husband has a sideline in dowsing, but I am puzzled that Reed would make use of him.”

“Perhaps,” I said, “it’s one of his contractors that asked for this kind of help.”

“There are better ways,” muttered Holmes.

I had to agree. While, as a doctor, I had seen some amazing demonstrations of the power of the mind enabling the body to heal—belief in placebos for instance—I did not think that the holding of metal rods, or sticks from a certain type of tree, helped someone align with mysterious field lines running along the earth, or above buried objects or underground water flow. Still, even as these thoughts ran through my head, I realized that it was rather arrogant to believe that we pitiful humans could categorically claim to know all that did or did not actually exist.

Holmes, as always, read my thoughts. “Many knowledgeable individuals believe in the power of dowsing,” he said. “Some noted engineers use it to find water, claiming that it works when all other methods fail. Archeologists have been known to dowse to find tombs or graves—with some recorded success.”

“Surely it’s all chance,” said the squire. “When one of them is lucky enough to find what they seek, they trumpet the news everywhere. When they don’t, it’s shrugged off with feeble excuses and forgotten.”

Our conversation was abated as we drew to a halt on the grounds of Retford’s manor, Coleman Park. We were down the slope from a large bleak edifice, the stonework black and damp with age. Vines covered it from the soil to the roof peaks, yet in places it was obvious that work was underway to reclaim the building. Great stretches had been cleared and exposed to the light, quite likely for the first time in generations.

There were already several dozen locals gathered in a loose semicircle, facing up the hill toward the house. Among them stood a woman in a loose garment, brightly colored, and augmented with garish handkerchiefs, necklaces, and bracelets. Her black hair was done up with more of the same colorful ribbons, with tendrils escaping wildly. The crowd stayed several paces away from her in all directions, as if she exerted some sort of force which might affect them without their consent. She was staring into the distance, swaying slightly as if to music only she could hear.

A painted line ran along the ground from the house toward a low spot—clearly where the buried pipe was theorized to lie. A big hirsute man was pacing back and forth a number of feet away from the line around a medium-sized oak, carrying a Y-shaped stick, while two or three boys scampered around him, carrying their own recently obtained branches. They were careful to stay away from the man, who—like his wife—seemed to inspire wariness. While not as colorfully dressed as the fortune-teller, he still had that same unusual aspect—what one might expect to encounter deep within some Balkan forest where grim tales of supernatural creatures were still whispered around campfires.

At one side of the gathering a large grim-looking fellow stood alone, dressed in dark clothing like a vengeful preacher. “Retford,” stated the squire, leading us over to him. Introductions were made, and I had a chance to see firsthand this morose man who had faced such a disappointment in his youth. Perhaps, I thought, his countenance lightened when he was in the presence of his fiancée, but on this day he seemed as forbidding as he must have been throughout the previous quarter-century.

The day matched his expression. It was a typical October on the moor, dark and overcast, with a damp breeze that promised rain, and soon—nothing unusual. Stronger gusts occasionally whipped about us, blowing autumn leaves and other detritus before it. Low clouds scudded overhead, turning blacker by the minute. I lost myself for a moment, gazing across the distance at the far slopes where the cloud shadows raced over the ground like galloping moorland ponies. Intruding memories of other visits to this place distracted me until Holmes cleared his throat. I looked at him, realizing that, as ever, my thoughts had been obvious.