The Adventure of the Home Office Baby 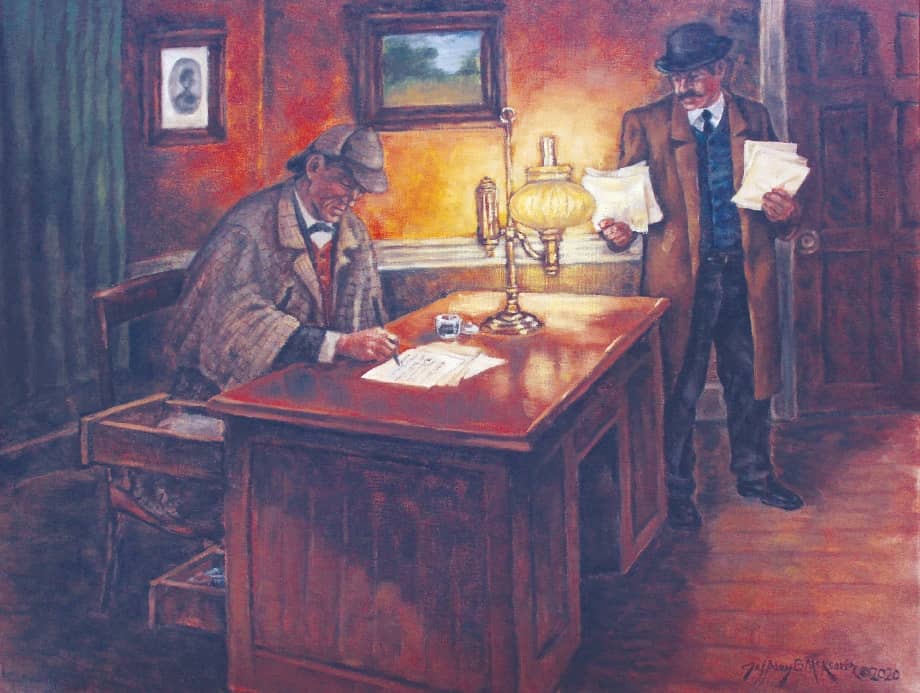 FOLLOWING the occasion of my marriage, and relocation with Mary to our newlywed home in the Paddington district, only a few blocks east of the great station itself, I was able to continue building my new practice while still finding time to assist Sherlock Holmes in a number of investigations.

This included the Adventure of the Sixth Finger, which so terrified a pair of spinster sisters, and an incredible discovery in the Iron Age fort near Llandysul, which must remain unknown except to scholars until such time as its implications can be determined. Heaven help us if word should ever surface about that case, but I did have permission from Holmes to make a record of it, which I stored away in the tin dispatch box that I keep at Cox and Company for just such cases that should not be forgotten, no matter the risk. Yet another narrative of national importance will be placed there as soon as I have finished writing it. I was reminded of this particular case by a recent press article detailing the unexpected death of the principal figure involved, and while the specifics cannot be revealed publicly, I’m moved to record here a true account.

It was an overcast morning in late November of 1889 when I found myself passing through Baker Street. As I ambled along, I nodded to a number of acquaintances, shopkeepers and mothers, landladies and cabbies, who made up that little community of which I had been a part for so long. The fog was lifting and the morning light waxing when I reached the door of 221. I used my old key to enter, as it had been made clear to me, both by Holmes and Mrs. Hudson, that the simple fact of no longer lodging there did not mean that my right to enter was in any way diminished.

Calling out as I entered, I was gratified to hear Mrs. Hudson make her way from the back of the house. I could smell something baking, and my pleasure at seeing her was compounded by the knowledge that something pleasant would soon be pulled from the oven.

Informed that Holmes had just come in, I climbed the steps, reflecting ruefully that I could no longer avoid counting them. A year or so earlier, Holmes had pointed out, as an example of the observational mind, that I had previously climbed those steps thousands of times without making note of their number. He, of course, knew exactly how many there were. I saw his point and had since been plagued by a compulsion to log each of the seventeen steps nearly every time I ascended to the sitting room.

“Come in, Watson!” cried Holmes, who I found standing by the mantel. He was holding a cup, and he turned it up and finished its contents with several swallows. “You are just in time. Tea?”

“Just in time for tea? It’s a bit early, isn’t it?” “When you’ve been out all night as I have, picking up the last pieces of the Brune Street killing from under Athelney Jones’s nose, there is no right or wrong time. And by ‘in time,’ I meant that you are in time for my expected visitor.”

Holmes stepped to the table, where a tray held a pot and several clean cups, and poured for me while I shed my coat, hanging it upon one of the pegs behind the door alongside his Inverness and fore-and-aft cap. I accepted the cup and crossed the room toward my old chair by the fireplace, clearing my throat to ask the particulars of his involvement in the case that was on the front pages of every newspaper, but just then the doorbell rang. I soon heard voices, then steady footsteps from more than one person climbing the stairs. Setting down my cup, I stood and turned toward the door to see a young lady enter, followed by our old friend Inspector Lestrade, who complimented Holmes on identifying the murderer earlier that morning. Did this new visitor have relevant information? I wondered. I was soon to learn that she was there regarding an entirely different affair.

Mrs. Hudson followed the two visitors almost immediately with a fine mound of scones, along with another fresh pot of tea. As everyone was settled and served, I had a chance to observe our visitor. She was in her mid-twenties, tall with dark brown hair. She had a wide forehead with striking blue eyes, and a small but rather distinctive mole about an inch to the left of her mouth. Later I would see that, when she spoke, it seemed to vanish within a dimple. She appeared to be a bit nervous, but that was typical of many visitors to that sitting room. Still, she seemed as if she did not want to be there. I could see that her simple outfit was of fine quality, although not expensive, and several years out of style.

“Mrs. Aiken,” said Holmes, gesturing for her to take the basket chair usually claimed by Lestrade, who found a place on the nearby settee. I sat back down, curious as to what we would hear.

“The inspector’s note indicated that you had presented an interesting problem,” Holmes said. “Please, Mrs. Aiken—relate your story. The poor doctor is in the dark as he arrived unexpectedly just a moment ago.” And then he dropped into his chair, crossed his legs, and closed his eyes while steepling his fingers before his face.

The young lady seemed surprised. She looked to Lestrade for guidance. He nodded and said, “Perhaps I should speak first.”

Holmes, eyes still closed, waved a hand in acknowledgment, and the inspector began, although looking at me as he spoke. “Doctor, what do you recall of the Home Office Baby?”

I frowned, having some vague recollection of it. Without opening his eyes, and as if sensing my puzzlement, Holmes murmured, “Check the index, Watson.”

I rose and walked over to the shelves that held Holmes’s scrapbooks. Since long before I’d met him, he had maintained these repositories of information related to past cases, as well as facts concerning people or events that might be useful in the future. His collection was a long row of books, each fat with pasted-in clippings or loose items such as theatre programs, train tickets, handwritten notes, telegrams, sketches, and the occasional obscurely purposed object like a bird feather or even in one case a small envelope filled with a pinch of sand, cryptically labeled “Pagham – November ’78.”

Holmes’s filing system might charitably be called “eccentric,” but I gambled upon the simplest of choices and pulled out the “H” volume, and quickly found his notes upon the incident. I carried the book with me back to my chair, sat down, and summarized the facts aloud.

“In 1884,” I stated, “a Reverend Mirehouse of Colsterworth, in Lincolnshire, wound up in a dispute that went all the way to Gladstone’s Home Secretary, Sir William Harcourt. It seems that a local graveyard had been proposed for closure without making a new cemetery available for the parish, and there were difficulties in designating consecrated grounds in which to bury the bodies.”

Seeing what came next, I glanced up at Mrs. Aiken, to make sure that all this talk of bodies wasn’t too much for her, but she seemed unfazed.

“In early November,” I continued, “Reverend Mirehouse, in protest, sent through the mail the body of a stillborn infant, packed in a starch box, without telling the family what he had done. He marked it ‘Perishable.’ The stunt set off quite a tempest. There was an inquest, and the coroner, Mr. Braxton Hicks, thought it to be incredibly indecent, and that the minister ought to be reprobated, but Judge Phillimore was of the opinion that no known canon law had been violated, and that Reverend Mirehouse could not be punished. Still, he was severely censured, in spite of his full apology, and he was forced to pay the journey expenses for all the witnesses up to London for the inquiry.”

There was nothing further, and I started to close the book, but Holmes opened his eyes and motioned for me to hand it to him. He glanced over what I had read and then set it beside his chair before looking expectantly back toward the inspector.

MORE STORIES FROM THE STRAND MAGAZINEView All