How Law and Order Came to Aramie 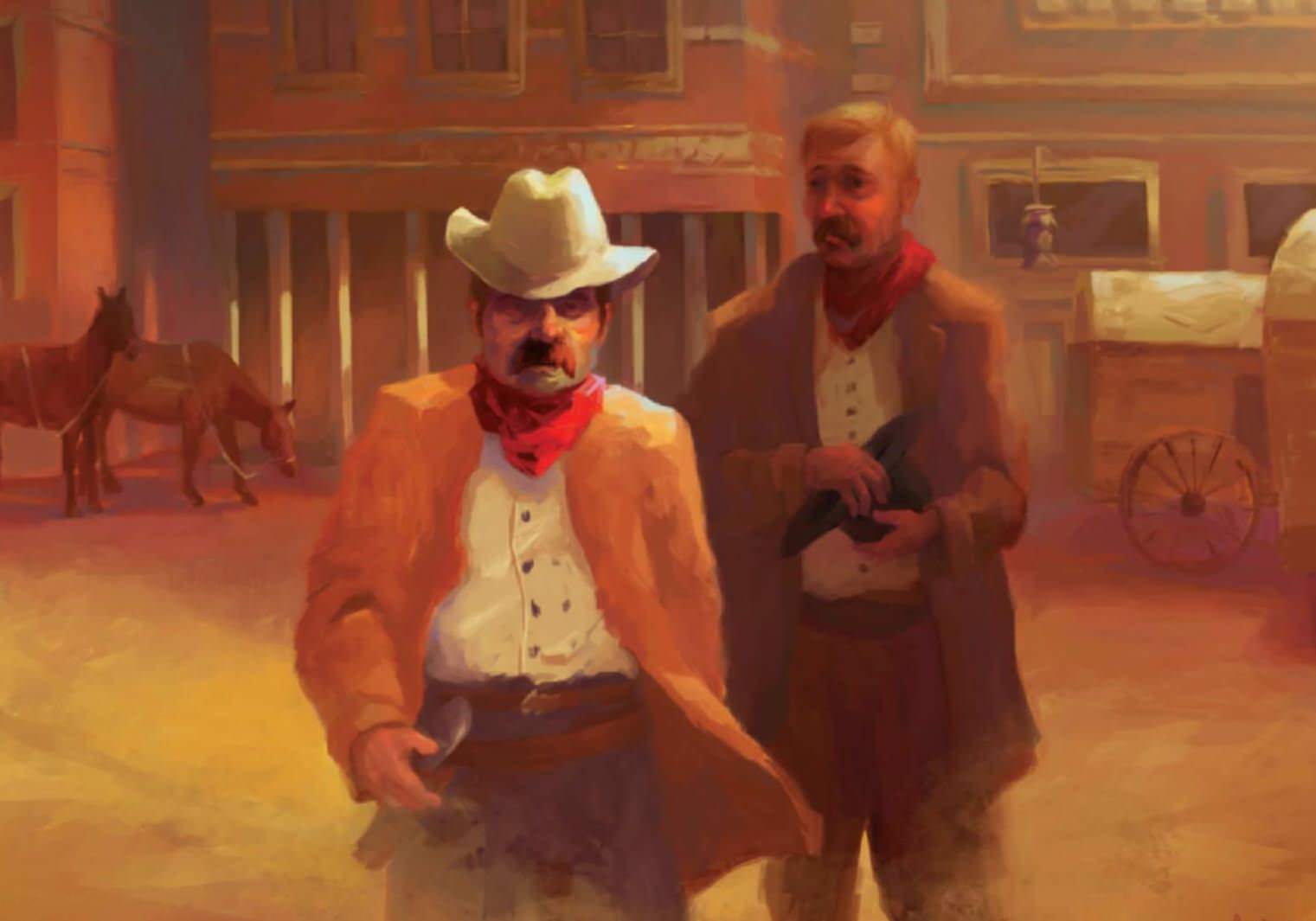 BIG John Oakes, called Big because bigness was a quality of his nature—and the lack of it, of his physique—was asleep, grotesquely doubled up on the antique couch of his living room, a vast depression in the center of which made any graceful disposition of one’s person on it impossible.

He awoke when the outside door opened, with a swift, instinctive reach toward his hip; but his revolver was in the gun belt flung across the back of a chair at his side. The sheriff grinned as Slim Mason playfully covered him with his own six-shooter and drawled, “I reckon the drop’s on you, Sheriff.” He added, “Didn’t know you was partial to the festive siesty.”

“Been chasing all over Arizony for that pirate, Grady,” explained the sheriff. “And the seas on the desert sure plays tarnation with a man. My pasear didn’t ree-sult in the apprehension of Mr. Grady, I might remark... But what is the occasion for this unexpected and dee-lightful visit?”

The smile left Mason’s face. A look of concern shadowed it.

“Bud Tevis. He’s shootin’ up the Cameo again.” Mason’s drawl was gone. The sheriff was in the midst of an expansive yawn, arms outstretched. His lips closed and whitened tightly.

“Bud Tevis!” His tone was hard. “Again, eh?” Oakes stood up and reached for his gun belt. There was a pause as he slowly buckled it on, adjusting it with unnecessary care in an abstracted way.

“No. Rode up to the Cameo a-shootin’ carefree like, and I reckoned I’d saunter down this way and let you know, John.

“Sure seems like Bud is hankerin’ for you to take his irons away from him agin,” Mason added after a while. The sheriff was silent. Two lines at the corners of his mouth deepened.

“Tevis has just been sobered about long enough to get real riled over that,” he commented grimly. Mason pulled the brim of his sombrero thru his fingers reflectively.

“An’ agin, he may be out for Mink Watson, John. Mink and some others has been mighty powerful free of late with their opinions o’ who got ol’ man Jordan.”

“If Bud tries any gun usin’ on Mink...” he paused. “Well I got my own ideas about Jordan, and if Tevis gets Mink, there’ll be a damn quick settlement ’tween Bud Tevis and the law—”

“I’m with you, John!” The cry broke from Mason involuntarily.

“But I’m wantin’ somethin’ certain on him,” went on the sheriff, and he did not notice the light die out of Mason’s eyes. “There was Jordan, and there was Cuppy McCallister. Tevis—the cards says. But the dirty sneak is a brave fancy shooter in public and a cussed coward when he gits his man!”

Oakes slipped into his coat and Mason handed him his hat off its peg.

The sheriff laid his hand on Mason’s shoulder.

“I ain’t countin’ on none o’ that, Slim,” he said quietly. “The law abidin’ citizens o’ Aramie gave me the badge to put a stop to this here kind o’ reckless gun usin’. I’m aimin’ to do my duty by ’em. Which same I wants to accomplish without resortin’ to gunplay myself. I calmed Bud once without shootin’ an’—”

“But he was drunk then—”

“An’ you smashed the light so’s I could grapple him in the dark, Slim, which I ain’t forgettin’. But he didn’t know me from nobody else then. Now I’m reckonin’ on him knucklin’ to the authority o’ the law. Bud’s half yellow, and he ain’t such a fool but what he knows how sentiments runnin’.”

But Mason was not convinced.

“There’s a powerful lot in that gang at his back. Bud’s that kind. He hankers for their applause. He’ll do anything to get it—or so’s he won’t lose it. And this same public sentiment’s ’bout even divided, I opine, with them that’s backin’ Bud.”

“He’ll put his guns up peaceable. He ain’t for overt acts. He’s a coward.”

A troubled frown creased Mason’s forehead. He made as if to say something and stopped short when Oakes looked at him. Then as the sheriff laid his hand on the door to go out, Slim jerked his hat thru his fingers in awkward embarrassment and, his eyes on the floor, said slowly and with painful effort, “O’ course it’s all low-down lyin’, but Bud’s gang…” He reddened and was silent, absorbed in the tense manipulation of his hat. Oakes looked at him, surprised.