An Unlikely Series of Conversations 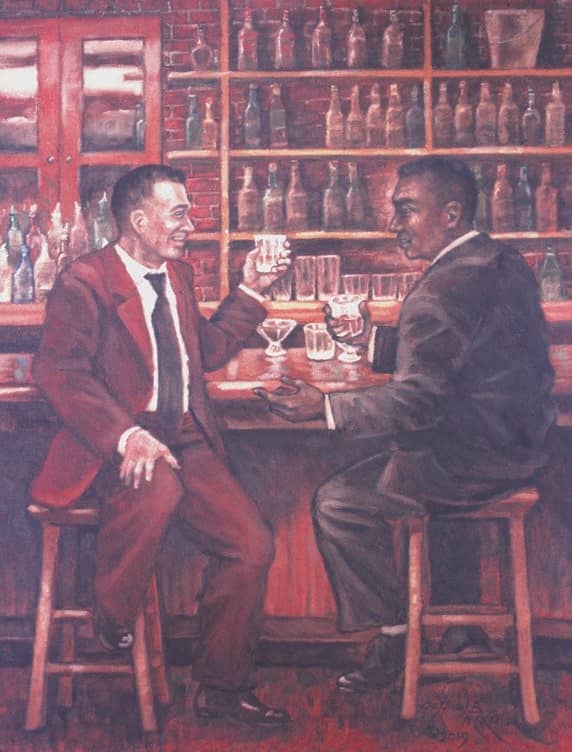 LAERTES Jackson showed up at the human resources office of Martin, Martin, and Moll at 10:37 on a Tuesday morning in May.

The mid-size investment firm was located on Maiden Lane in the Wall Street area of Lower Manhattan. There was no ostentatious sign outside and only the initials MMM appeared on the legend at the entrance. Even then, just one floor, the fourteenth, was identified as housing MMM while the firm actually occupied seven contiguous floors. In the past two years MMM had been sued by various individuals and government agencies for multiple civil rights and sexual harassment violations. The CEO and several VPs had been relieved of their positions and the corporation itself had been fined millions of dollars in reparations.

The new CEO, Ms. Winsome Millerton-Pomerantz, had made a public statement vowing that the investment firm, which oversaw more than a dozen multibillion-dollar retirement funds that, either in full or in part, served public employee unions, would make a supreme effort to right the listing ship of their intentions.

Taking this intelligence to heart, Laertes decided to apply for an entry position at MMM.

Arriving at the fourteenth floor, Laertes encountered B. Chang, a young Asian woman sitting within a semi-opaque and circular azure desk.

“HR is on the twentieth floor, Mr. Jackson,” she said with a lovely red-stained smile. “Take the elevator to the right.”

On the 20th floor Clarissa Watson, a woman whose skin was even darker than Laertes’s, gave him a confused, turquoise-tinted smile, saying, “But your appointment isn’t until 1:40, Mr. Jackson.”

“I’m usually early,” Laertes said, cocking his head and smiling softly. “My father always told me to get there before your competitor because you can never tell what will be left over later on.”

Young Miss Watson smiled and nodded. She said, “We have magazines and bottled water. You can sit in the waiting area and I’ll try to get you in early. Ms. Rodriguez is interviewing applicants for the trainee broker position and sometimes the interviews take less time.”

Laertes picked up the Wall Street Journal, turning pages until his eyes fell upon the phrase “trying to define the first stock transaction . . .” It seemed that there was a great deal of disagreement among economic scholars about the age of the idea of stocks, investments, and interest.

“Mr. Jackson?” a woman said so softly that Laertes wondered if indeed he had actually heard the utterance.

He looked up and saw a roundish woman with pale skin, dark locks, and eyes that seemed to see past him into some other realm beyond his comprehension—and maybe hers.

“My name is Rahlina Rodriguez. I’m supposed to interview you.”

“Okay,” Laertes said, rising from his perch on the coral-colored couch. “I took the day off from work so I have as much time as you need.”

“Where do you work?” Rahlina Rodriguez asked.

“Maritime Merchants Bank over on twenty-third.”

“Savings and loan,” she stated.

“I don’t know about that but it’s pretty mom and pop. I’ve been a teller there the past twenty-four years.”

“Have you worked with investments?”

“What does that mean?” The expression on Rodriguez’s wary face was a leftover from childhood when she was too cute for her parents to punish; at least that’s what Laertes supposed.

“I ask new clients opening savings and checking accounts if they want to connect their money in an investment account and, if they do, I check that box on their online form. But whatever it is, I don’t understand it nor have I anything to do with where the money goes.”

Something about what Laertes said seemed to bother Rahlina.

“We should go to my office,” the bank officer said.

“Okay,” Laertes replied with a forced smile. He followed her down a gray-tiled hallway toward a bright yellow door. Rahlina moved through the doorway like a dancer, swaying from side to side, creating an aesthetic of walking. Laertes trailed her with his dogged, straight-ahead gait.

The yellow door led to a room that was drained of any color. The white floor, walls, and ceiling sheltered an ivory-colored desk and a whitewashed pine chair where the subject who was there to be interrogated had to sit.

He knew where to go. In his mind he’d answered the first question correctly because he didn’t need to ask where.

Rahlina Rodriguez settled in the seat behind the smallish pale desk. She placed the fingers of both hands on the ledge before her and smiled, slightly.

“Before we begin,” she said. “Do you have any questions?”

Thinking she hadn’t understood him Laertes said clearly, “I said, are you Mexican?”

“We don’t ask questions like that here at Triple-M.”

“If not, then how do you plan to right the listing ship of your intentions?”

“But still you have a black man named Laertes meeting a maybe Hispanic woman named Rodriguez during a hiring period where the cultural tendencies of the company in question are not serving the makeup of the unions that you represent.”

“The facts that you are African American and that my name has roots in the Spanish language have no direct bearing on your application for the entry position of trainee investment advisor.” Rahlina Rodriguez was not happy with the direction of the interview.

“The letter I got from human resources said that this interview might be recorded,” Laertes said. “Is it?”

“Is that the answer you’re supposed to give me if the cameras and tape recorders are turned on?”

Rahlina’s dark eyes darkened. The locks of her raven hair took on the appearance of razor wire.

“I don’t know,” she said. “We have both signed away our right to privacy in this conversation and so we may or may not be recorded.”

They gazed across the white expanse of the desk, under the pallid ceiling.

“That’s the other thing,” Laertes said after a minute of this white-wall silence.

“What is?” the interlocutor asked.

“You call me African American but I don’t answer to that description. People who come from another country to this one use the hyphenate name. You know, Italians who came over a generation or two back calling themselves Italian-Americans. Maybe they kept up contact with home or followed cultural norms that are particularly Italian. But a man like me, a man whose ancestors were kidnapped, chained, and dragged over here centuries ago is not, cannot be a hyphenate. At least not the kind of hyphenate that you say. You might call me an AbducteeAmerican, an originally Unwilling-American. You might say that I’m a partly Disenfranchised American. But African American? I mean even if my mama was from Guinea, you’d do better to call me a Guinean American than African. Africa’s a continent not a country, not a culture. You don’t use the term White-American because that has no cultural basis; even saying Euro-Americans makes very little sense.”

“We say African Americans because that is the parlance,” Rahlina interjected.

“Used to be the parlance was colored, Negro, Afro, nigger, coon, jigaboo. The parlance don’t make a word right. And I refuse to be called after a continent that no one in my family remembers.”

“Well, Mr. Jackson, if you say that you are not African American, I suppose this interview is over.”

“The commitment of this firm is to hire and promote peoples from various ethnic backgrounds including African Americans.” With that Rahlina Rodriguez stood up and waited.

After a moment or two Laertes realized that he was being asked to leave.

He stood also, raised his eyes to the ceiling, and said, “If this conversation has been recorded I want a copy of it delivered either to the address on my application form or to my business email address thereupon.”

After that he exited the white room on the 20th floor of the offices of Martin, Martin, and Moll.

Three Thursdays after Laertes’s failed interview he was offered what turned out to be $112.37 in change from Zuri Chin—a seven-yearold child. Her mother, StaceyAnn, had presented the child’s canvas bag of coins while little Zuri pulled her head up over the ledge where the money was being passed from StaceyAnn to Laertes.

“You know, Ms. Chin,” Laertes said. “We’re not supposed to take loose change in these over twenty dollars.”

“But that’s my money,” Zuri called over the banker’s counter.

“I know your rules, Mr. Jackson,” Zuri’s mom said. “But you and I both know that one day, when she has money of her own, Zuri will remember the bank that made an exception for her Christmas savings.”

Laertes noticed a short man in a black suit standing at the front of the line for the next free teller. That window, belonging to Ms. Becky Blondell, opened up and the short man offered his place to the petite woman behind him. She smiled, nodded her thanks, and moved ahead.

“So will you take my money?” Zuri Chin asked, hoisting herself up once more.

“Of course,” Laertes told the medium-brown child. “Leave it here and we’ll count it in the machine overnight.”

“Thank you,” said her mother.

The next visitor to his window was the short man in the black suit who had let the woman behind go to Becky Blondell’s window.

“How can I help you, sir?” Laertes asked.

“Howard Sansome,” he replied. “I started a regular checking account at your Fort Green branch a short while ago but now I wish to upgrade it to your investment-plus plan.”

The man calling himself Sansome handed Laertes a plastic card designed in metallic gold, red, and blue colors. His name was superimposed in lowercase black lettering across the middle of the card.

“I’ll need to see some ID,” Laertes told him.

Laertes checked the New York State driver’s license and entered the bank number on his computer.

“Changing your account would be easy enough,” Laertes advised. “But the order has to be okayed by the manager of the branch where you started the account.”

“I moved from Brooklyn to Manhattan since then,” Howard Sansome said with something approximating an apology on his wide face. “Can’t you just make a note on my file or something like that? It would be inconvenient for me to try to get out to Fort Green at the hours the branch is open.”