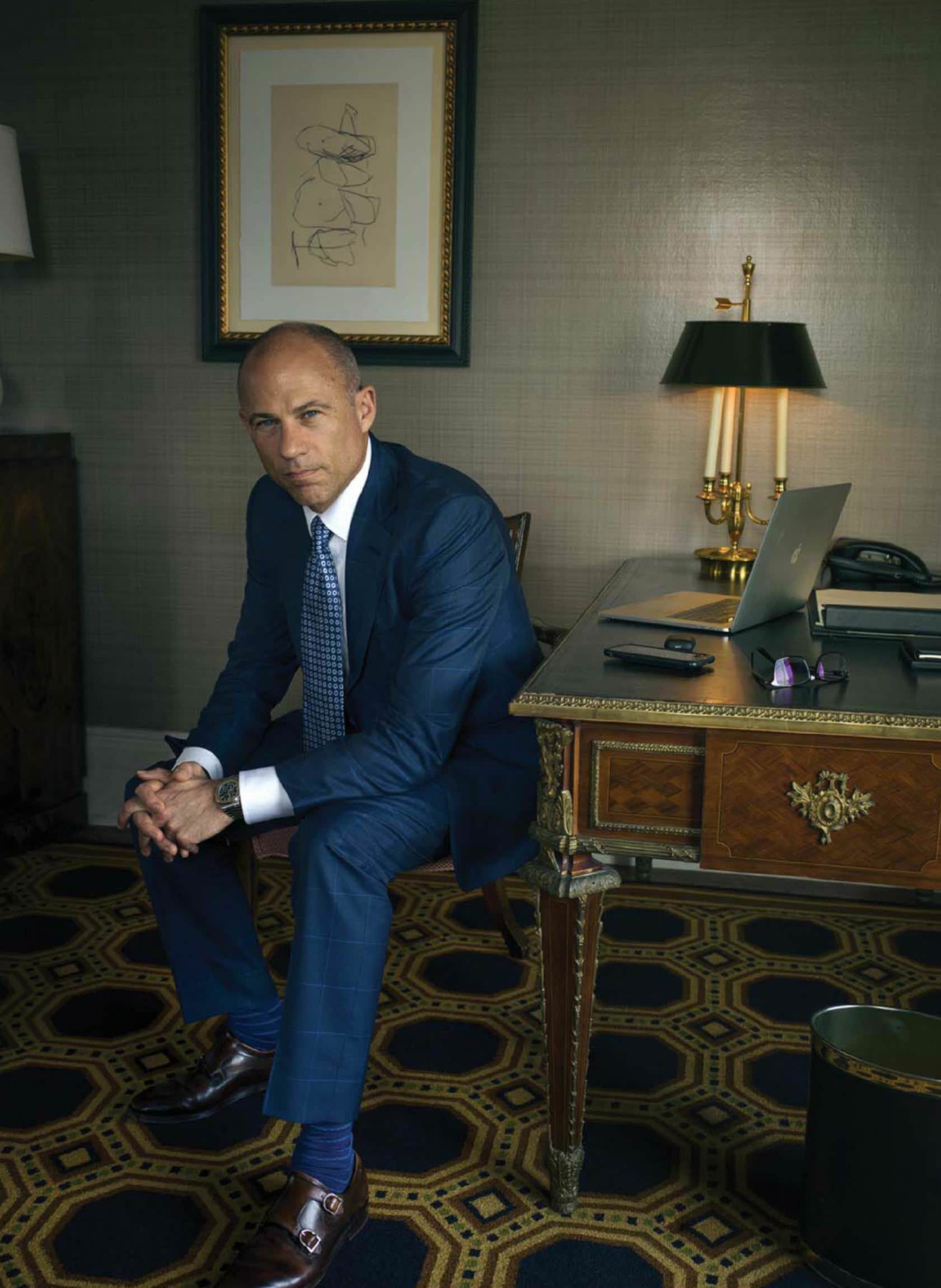 Is Stormy Daniels President Trump’s most formidable adversary? With her telegenic lawyer, Michael Avenatti, in her corner, she isn’t backing down. Amy Chozick reports.

Amy Chozick
By the time I knock on the door of Stormy Daniels’s room at the Roger Smith Hotel, a drab brown-brick tower in east midtown, she’s been holed up in New York for 24 hours, waiting to talk to prosecutors in the criminal investigation into President Trump’s former lawyer Michael Cohen. Lately, if Daniels takes more than a couple days off from her highly publicized nationwide strip-club tour, people assume she is at her home outside Dallas. “I’d bet by tomorrow afternoon there will be people at my house,” Daniels tells me as she settles down in the center of an oversize gray sofa. I sit across from her, on a faded upholstered armchair. Between us are a tawny Oriental rug and a table set with a pot of coffee and a spread of pastries in a striped Financier Patisserie box. The people she means— paparazzi and men in red trucker hats who want her to stop talking about her alleged affair with the president—began circling last spring when Daniels decided to take on Trump. In doing so she became globally known by a single name: Stormy, the unlikely, embattled symbol of our tempestuous times.

It is just after 10:00 a.m. on a Tuesday, still early morning in the world of adult-film stars and their entourages. Daniels is barefoot, in black skinny jeans with silver zippers at the ankles and a purple V-neck T-shirt. With no makeup Daniels, 39, looks much younger than when she appeared on 60 Minutes last March and told 22 million viewers about her dalliance with Trump, about the hush money and the threat to her daughter and the nondisclosure agreement that she says Cohen forced her to sign weeks before the 2016 presidential election. In person, she is nothing like that stoic, on-message woman. She is blunt, foulmouthed, funny. I ask her for more details on her alleged 2006 affair with Trump. “How many details can you really give about two minutes?” she says. Two minutes? I ask. “Maybe. I’m being generous.”

Calling room 811 a suite would be an overstatement, but there is a living room with a desk where Daniels’s lawyer, Michael Avenatti, who has parlayed her lawsuit against Trump and Cohen into cable-news ubiquity and a potential 2020 presidential run, works the phones. Late the night before, he changed locations, from the chic Park Hyatt, where he has practically lived since taking on Daniels’s case last spring (and where the media had begun to gather, knowing Daniels was in town), to the less conspicuous and infinitely less chic Roger Smith, with its shabby, red-carpeted lobby and dim recessed lighting. Avenatti is hardly paying attention to us, focused as he is on his latest clash with the White House, this time over the family-separation policy at the Southern border. During the nearly two hours that Daniels and I talk, Avenatti becomes a sort of white-noise outrage machine in the background. (“Juan Carlos, we need to find a way to make this happen!” and “This is why people trust me!”)

Avenatti, with his refrigerator-shaped jaw and overcaffeinated demeanor, can come off as Daniels’s macho protector. But up close their relationship is warmer and more equitable. For all his cable-TV cockiness, Avenatti seems to admit that Daniels could outsmart him. (“She’s really fucking smart,” he will tell me at least three times.) Daniels clearly trusts and relies on Avenatti, but she also treats him like a lovable, well-meaning stepbrother who forgot to take his Ritalin.

“You want a cookie?” Daniels calls over to Avenatti, extending the box of pastries his way.

“I’m trying to watch my girlish figure,” he replies.

She looks at me and rolls her eyes at him.

Daniels digs out a blueberry muffin, and as she picks at it she tells me that ever since “all this happened” she hasn’t been able to really enjoy a meal. The death threats—ominous notes mailed to clubs before she arrives; suspicious substances hidden in gifts in her dressing rooms—got so bad that she had to hire three full-time bodyguards. She calls them her Dragons and pays them with her tips. “We’ve been at restaurants when we order food and it’s taken too long or somebody was watching and we’ve had to leave—like that.” Daniels snaps her French-manicured fingers. She throws a look at Avenatti. “That’s why I’m so skinny!”

On August 21, as this story was going to press, Cohen reached a plea deal with federal prosecutors in their investigation into the $130,000 payment to Daniels and a separate payment to Karen McDougal, both of whom have said they had affairs with Trump. In pleading guilty, Cohen implicated Trump, telling the court he paid Daniels off “at the direction of the . . . candidate” and “for the principal purpose of influencing the election.”

“How ya like me now?!” Daniels tweeted in response. In a statement later that day, she told me, “Michael and I are vindicated, and we look forward to the apologies from the people who claimed we were wrong.” Avenatti, who said the plea agreement may allow him to proceed to depose Trump in Daniels’s civil suit, texted me back just after the news broke: “Trump is in a lot of trouble. His habit of disloyalty and stepping on people is about to catch up to him.”

The violation of campaign-finance laws means Cohen will face criminal charges—even potential jail time. As for the president? If he weren’t in office he would almost certainly be indicted. Trump has denied the affair. He initially told reporters aboard Air Force One that he had no knowledge of any payment to Daniels. But after his lawyer Rudolph W. Giuliani admitted on Fox News that Trump had indeed reimbursed Cohen, the president confirmed as much, insisting by tweet that “money from the campaign, or campaign contributions, played no roll [sic] in this transaction.” In response to Cohen’s plea, Giuliani said “there is no allegation of any wrongdoing against the President in the government’s charges against Mr. Cohen.”

It is a cruel, if unsurprising, irony that through everything that has transpired, Daniels is the one who has been living like a wanted criminal. “We’ve been in a couple car chases,” she tells me at our interview. “We’ve had people put notes under the door, which means they know what hotel I’m in, which means we’ve had to change hotels in the middle of the night.”

She sits cross-legged and clutches a throw pillow under one arm. Directly behind her is a window that overlooks an airshaft. “It’s like you’re on the run,” I observe.

“Oh, I’m a fugitive,” she agrees. “Do you want to be Thelma or Louise, Michael?”

“Yeah, who decided to go off the cliff?” Daniels asks him.

“That was Thelma,” I interject.

“But was she driving?” Avenatti asks us.

“No,” Daniels and I say in unison.

“Which one of us gets Brad Pitt?” Daniels says.

On the day of our meeting Daniels had been cooperating with federal prosecutors for months, handing over documents related to the payment she received, readying herself for a possible grand-jury appearance. But the U.S. Attorney for the Southern District of New York unexpectedly called off an interview with Daniels after the press got wind of it, according to Avenatti. When I ask Daniels about the abrupt cancellation, she just lets out a long it-is-what-it-is exhale. Pornography isn’t known as a medium for female empowerment, but as a writer, director, producer, and actress, Daniels has built a career for herself in which she can largely write her own story. Does she still feel in control of her own fate? “Mostly. No, yeah, for sure, mostly.”

Daniels argues that her nondisclosure agreement is invalid because Trump himself didn’t sign it. She is also suing the president and Cohen for defamation. Ask her about the intricacies of the legal cases, however, and Avenatti barges in: “That’s off the fucking record!” Does she mind that he so often speaks for her? “It sounds exhausting,” she says. “Michael had hair when he started this.” 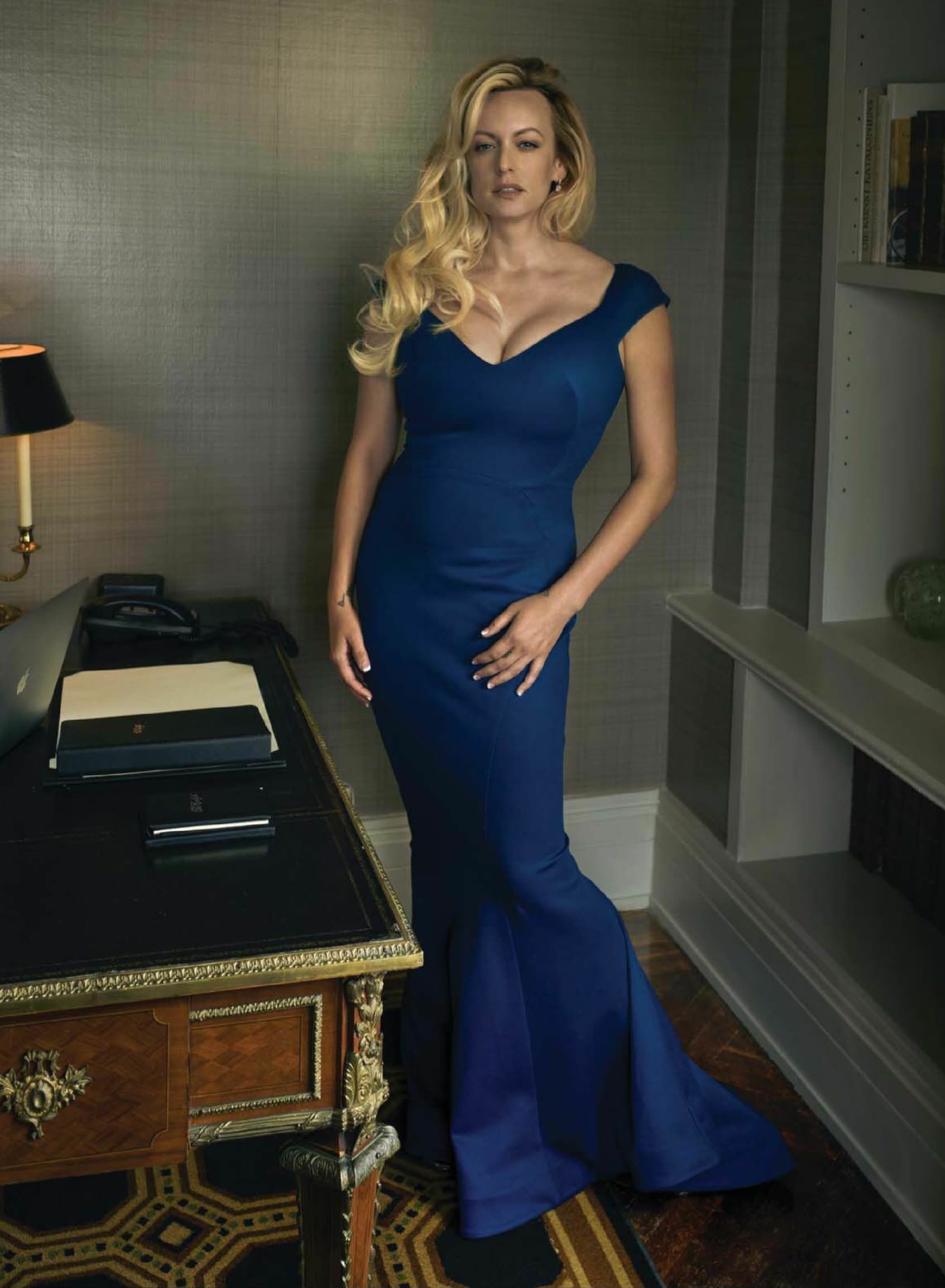