Mother Of The Year 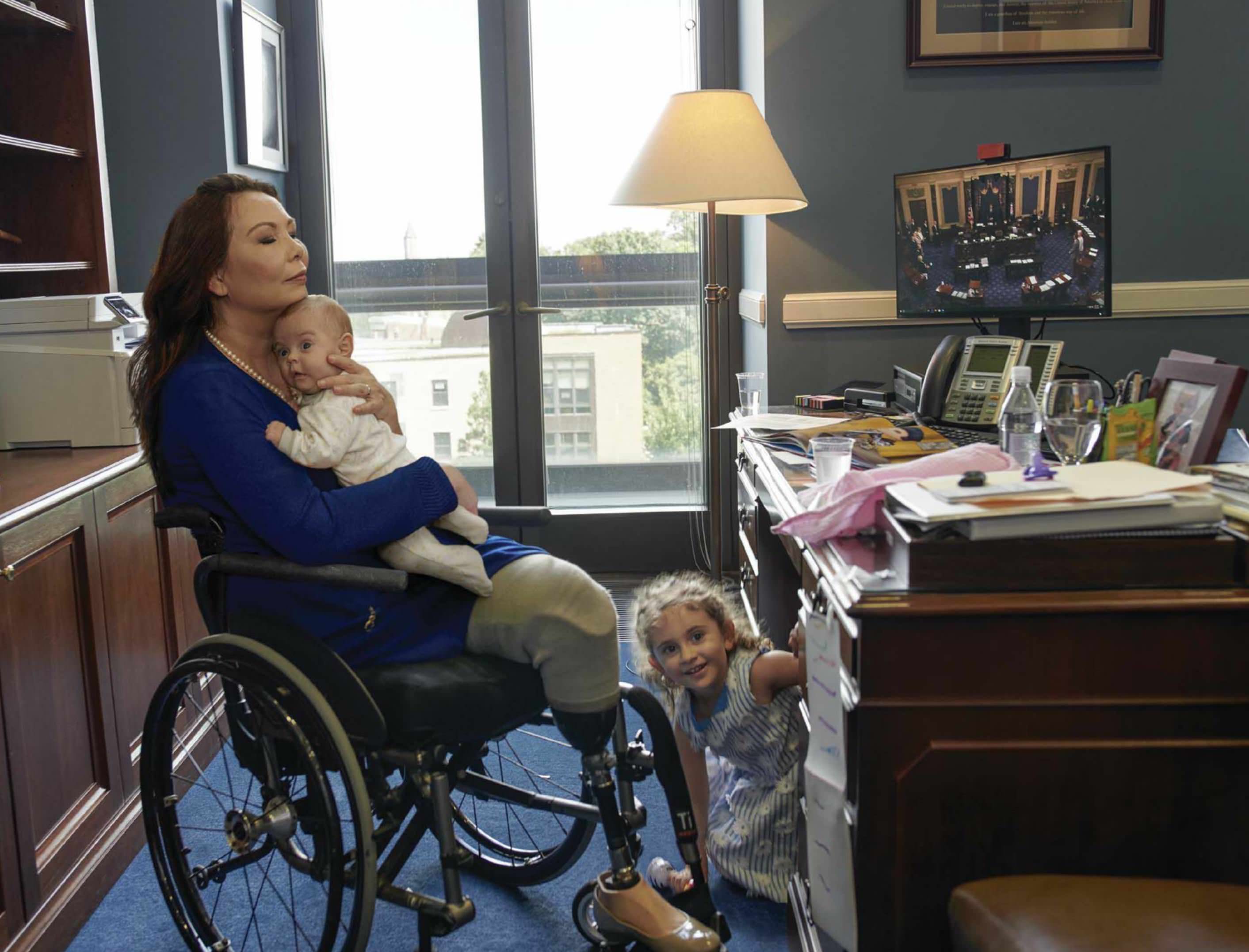 Tammy Duckworth has become a heroine to working parents. But heroics from the Illinois senator are nothing new.

Illinois Senator Ladda Tammy Duckworth owns a great pair of legs. They’re painstakingly painted by an artist to match the skin tone of her arm—right down to the freckles—and the second toe on one foot is longer than the first, just like her own used to be. But Duckworth can’t stand them. “When I see myself wearing those legs in a mirror, I see loss. But when I see this”—she gestures toward the steel-and-titanium prosthesis attached to her thigh above her right knee—“I see strength. I see a reminder of where I am now.” Same thing with her wheelchair. “People always want me to hide it in pictures. I say no! I earned this wheelchair. It’s no different from a medal I wear on my chest. Why would I hide it?”

She is sitting in the chair, a souped up Segway that she received from a veterans’ group, in a small office close to the floor of the U.S. Senate. Looped over its back is a bag with her breast pump. On the table in front of her is her daily schedule prepared by staffers. It is filled with meetings having to do with issues in her home state, a few Senate votes, and then, discreetly tucked in at four-hour intervals, a series of asterisks. Time to pump milk for her baby.

There are so many firsts attached to Tammy Duckworth—she’s the Senate’s first member to give birth while in office, its first member born in Thailand (to an American father and a Thai mother of Chinese descent), and, of course, its first female amputee. It’s that last distinction that tends to overwhelm all the others. As a wounded veteran with a Purple Heart, she has introduced or cosponsored bills protecting the rights of veterans—and she’s been fearless in confronting the president over military and foreign affairs. Last January, when President Trump accused the Democrats of holding the military hostage over immigration, it was Duckworth who took to the Senate floor, declaring in a now-historic speech, “I will not be lectured about what our military needs by a five-deferment draft dodger.”

When I started to ask Duckworth a question about the accident that took her legs, she quickly corrected me. “It wasn’t an accident; those suckers were trying to kill me.” Of course! I apologized, but she told me not to worry. It happens all the time. While she was sedated at Walter Reed hospital, fighting for her life, the doctors and nurses around her also kept referring to “the helicopter accident.” But she was sure they’d been attacked. She was the senior officer onboard that day; if it was an accident, it was her fault.

It wasn’t an accident. On November 12, 2004, then-36-year-old Captain Tammy Duckworth was flying a Black Hawk to her base in Iraq, some 50 miles north of Baghdad. The mission had been routine, a grocery run, as she later described it, though nothing about that time or place was routine. Attacks on the base were so common, its residents had nicknamed it “Mortaritaville.” Training to become a helicopter pilot, Duckworth, the only woman in her class, knew the risks going in. When helicopters are hit, there’s no ejecting to safety.

She and her three crew members were lucky, in a way. The rocket propelled grenade that pierced the Plexiglas floor of the cockpit near her feet exploded in a burst of flame, but it did not cause the helicopter to combust. Clinging to consciousness, Duckworth tried to use her legs to land but found the normally responsive $6 million piece of machinery sluggish. Then she passed out. After her copilot landed, he took one look at Duckworth’s blackened face, her slumped-over torso, the blood gushing from her lower body, and assumed she was dead. Black Hawks travel in pairs, and a second helicopter had landed nearby, so they needed to move quickly. The crew evacuated the living and the wounded and then used precious moments to retrieve what they thought was Duckworth’s corpse. And that, for her, has made all the difference.