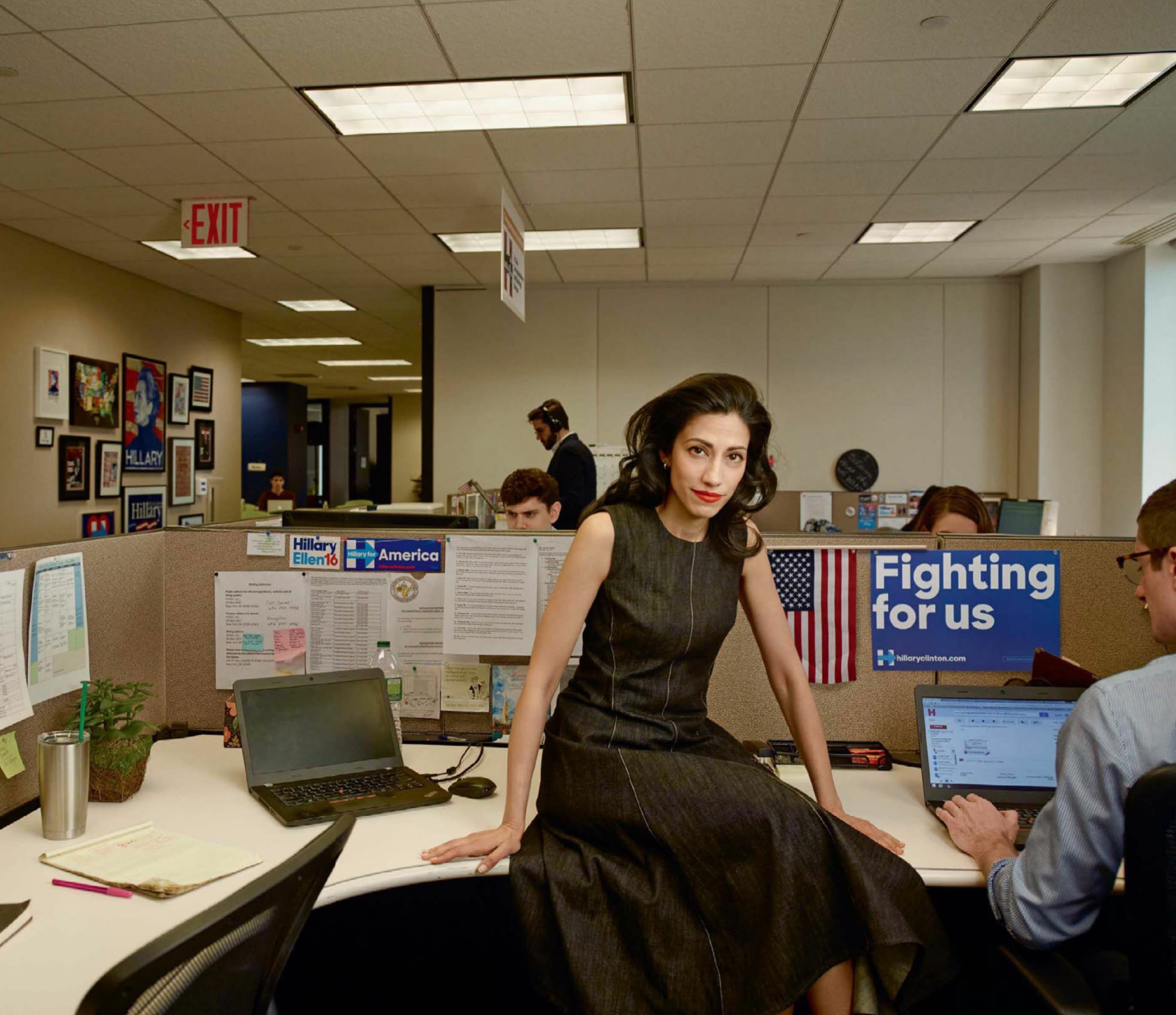 Huma Abedin, the fiercely private, formidably gifted strategist to Hillary Clinton,opens up about her job, her family, and the campaign of a lifetime.

A dazzling sunset is falling over the New York harbor as thousands of people crowd into the Brooklyn Navy Yard’s Duggal Greenhouse in early June for the culminating evening of Hillary Clinton’s long primary run. The floor is dense with supporters. Music is playing—“Ain’t No Mountain High Enough,” “I’m Every Woman”— as MSNBC’s election returns stream onto an enormous screen; whenever a new state is called in Clinton’s favor, the entire greenhouse bursts into cheers. At a quarter to ten, the news crawl announces, clinton to speak about historic win, and the network cuts to the floor itself. “Hil-la-ry! Hil-la-ry!” the crowd chants, seeing itself on-screen. The lights dim, and a mini-documentary begins to play. When it ends, the evening truly begins.

“Ladies and gentlemen, please welcome our next president of the United States, Hillary Clinton!”

The audience churns as the Clinton family weaves toward a platform in the center of the hall. The candidate is dressed in striking white. “Thanks to you, we’ve reached a milestone,” she says, shouting above the cheers. “The first time in our nation’s history that a woman will be a major party’s nominee.”

The call is heard around the country, but for Huma Abedin—Clinton’s assistant, adviser, and professional confidante for two decades, who is watching backstage—it has even deeper import. “You always try to keep a sense of the history in your mind, and it creeps up fleetingly as you go through the motions of your day-to-day,” she says, “but it overcame us that night, really at that moment.” Just before Clinton walked onstage, Abedin whispered in her ear: “Take a deep breath, look around the room, and savor the moment.”

Powerful, glamorous, and ubiquitous, Abedin is in many ways the engine at the center of Clinton’s well-run machine, crucial and yet largely out of sight. She presides over the candidate’s public appearances, helping set message points and optics. She coordinates much of the campaign’s work around the office, bringing a large, sprawling operation in line with Clinton’s vision and voice. And she is a key point person for the most essential parts of the coming Democratic convention: who will speak, what they’ll say, and in what order they’ll appear.

To onlookers, Clinton and Abedin seem to travel the world as a single entity joined by complementary strengths. If Clinton spends her life at the microphone, Abedin is constitutionally circumspect. If Clinton, in her bold suits and impeccable coifs, distills a certain era of feminist empowerment, Abedin, with her breezy downtown dresses and mobile power-dialing, is the professional face of a younger, more wired-in female generation. As Clinton’s longest-serving staffer, she is both the campaign’s deepest memory and its farthest-seeing eye—a woman who, more than anyone besides the Clintons themselves, can envisage the sort of president that Hillary will be, based on her work in the White House, the Senate, and the State Department, and who’s down with what she sees.

That rangy perspective adds unusual layers to their bond. A month later, in Washington, D.C., Abedin ushers Clinton toward the stage for an address at the annual meeting of the National Education Association, the country’s largest labor union. More than 10,000 people fill the hall. Before heading to the podium, Clinton pauses to talk with Abedin about the convention lineup. Then Abedin drops back, and Clinton takes the stage.

With the speech in play, Abedin’s real work can begin. She checks to make sure someone is on teleprompter duty. She rushes to an urn of coffee; her umpteenth cup of the day, well creamed. Her cell phone is already ringing, and with a paper cup in one hand and her iPhone in the other, she starts working over details for the Democratic National Convention.

“Hi, Reverend,” she says. “How are you? . . . Yes. Yes, of course. We’re going to prepare talking points, and we’re going to make sure you see them before you talk to press. . . .” Abedin, now 41, wears a trimly cut black summer dress and speckled heels. She started as an intern in Hillary Clinton’s White House office, in 1996, and still has the hint of an intern’s shyness, crossing one foot over the other and dropping her chin as if to blend into the carpet.

And so it goes. After the speech, she and Clinton will hitch a ride on Air Force One for a joint afternoon event with President Obama, in Charlotte, North Carolina. “It’s always great coming into these labor conventions because people are excited,” Abedin explains. “They all have their big——”

She stops mid-sentence. Something about the crowd’s latest cheer sounds different to her. “Oh, this is it!” she cries, and bounds back down the corridor as the applause mounts and Rachel Platten’s “Fight Song” starts to play. Abedin bursts onto the convention hall floor at the very moment Clinton steps down from the stage.

In an era of workplace restlessness, Abedin has never had a job that does not orbit Clinton or the people in her life. She has progressed, over the years, from “body woman” to deputy chief of staff and now to campaign vice-chair, but those who knew the Clintons’ White House say Abedin had pronounced skills even as an assistant. “Huma was more than a body person,” Chuck Schumer, the senior New York senator, says. “She’s a good listener, Hillary, but she really listened to what Huma would say. If she didn’t say anything, Hillary would ask her what she thought.” According to John Podesta, the campaign’s chair, who has served under Presidents Clinton and Obama, “She always had a certain presence that made people rely on her to fix things that needed fixing.” He adds, “Her poise, her unflappability, her ability to problem-solve. . . . There are people who are terrific at running scheduling operations or at being the rolling chief of staff or at keeping the political connections going. What’s interesting about Huma is that she does all of that.”

Gavin Newsom, the lieutenant governor of California and former San Francisco mayor, describes Abedin as a political “Swiss Army knife.” He recalls meeting Clinton in San Francisco and, a couple of days later, receiving a detailed letter from her following up, point by point. “All I could think was, There’s no way Hillary Clinton could have written that letter without Huma,” he says. “She’s connecting dots, building bridges, and doing the work of a half-dozen people. I joke with my staff, ‘Can’t you be more like Huma?’ ”

To hear Abedin tell it, though, she’s just a kind of accidental Forrest Gump of politics. The 2000 Camp David summit between Israeli prime minister Ehud Barak and Palestinian leader Yasser Arafat? Oh, that was fascinating, especially because she got to use her Arabic. The final drive home to Chappaqua, New York, in January 2001? That was so strange— especially because it was just the Clintons, the now-former president’s body man, and Abedin, then only 25. She attributes her assiduousness and omnipresence to her boss’s example. “Hillary is just a problem-solver by nature, and by sheer will she forces us to be that way, too,” Abedin says. “Today I kind of live in the world of ‘Don’t assume anything.’ I always ask. Every time I’m on a conference call, it’s me constantly asking the one thing that I haven’t thought about or that nobody else has thought about.”

A sense of mystery about just what Abedin does—and how she does it—trails her wherever she goes. “She has always, from the first minute I’ve known her, been able to make her job, which is basically impossible, look effortless,” says Risa Heller, a communications consultant who met Abedin in 2005, when Heller was working for Schumer in the Senate. Given that the job is at once high-profile and opaque, it’s no surprise that Abedin has ended up in the public eye in ways both friendly (she has been played by Cecily Strong on Saturday Night Live) and fraught. In the spring, Abedin was compelled to testify before the FBI in the course of its investigation into Clinton’s use of a private email server as Secretary of State. In July, it was suggested that Abedin’s security clearance, among others’, might be jeopardized. Chuck Grassley, the Republican chair of the Senate Judiciary Committee, has for three years now spearheaded an effort to show that Abedin’s work within the State Department posed a conflict-of-interest risk with some consulting work she did for the Clinton Foundation and related private-sector entities; he also suggested that she worked too many days for her employment status during a particular period. (Both complaints concern the technical requirements of being a “special government employee,” the department category that allowed Abedin to work from New York, rather than D.C., after giving birth; the matter is still under review.)

This scrutiny, which centers on not only her doings but those of her boss, has allowed the two a thick-and-thin intimacy. “The nature of our relationship has changed,” Abedin says. “Over the years, we’ve shared stories about our lives, we’ve shared more meals than I can count, we’ve celebrated together, we’ve mourned together.” Clinton herself describes Abedin as “among the most capable and confident people in public service.” She explains, “With Huma, her grace, her intellect, and her humility have been unmatched as I’ve watched her go from an aide to an adviser to one of the people at the top of my campaign.”

Two days before the late-July convention, the stakes have rarely been higher for the Clinton campaign. The candidate, now in Miami, prepares to introduce her vice-presidential pick to the nation, as Donald Trump approaches a lead in the polls. Emails from within the party’s national committee, leaked and then scattered like thistle spores into the wind, reveal a hidden slant to the primaries, quickly forcing Congresswoman Debbie Wasserman Schultz to resign as the party’s chair. The campaign is working around the clock to retain its months-long lead. And now its staffers must bring Virginia senator Tim Kaine, a public-service oriented military dad and Clinton’s new running mate, into the eye of an intensifying storm.

On a charter jet to Miami, the press takes bets on how many seconds will pass before Kaine—who spent a year working with Jesuit missionaries in Honduras during a break from law school—will start speaking Spanish. Backstage, the call goes out at 12:49 p.m.: “One minute.” Clinton arrives at the converted basketball arena of Florida International University, followed by Kaine. At Clinton’s elbow is Abedin, who follows her boss down the hall.