The Woman Who Knew Too Much 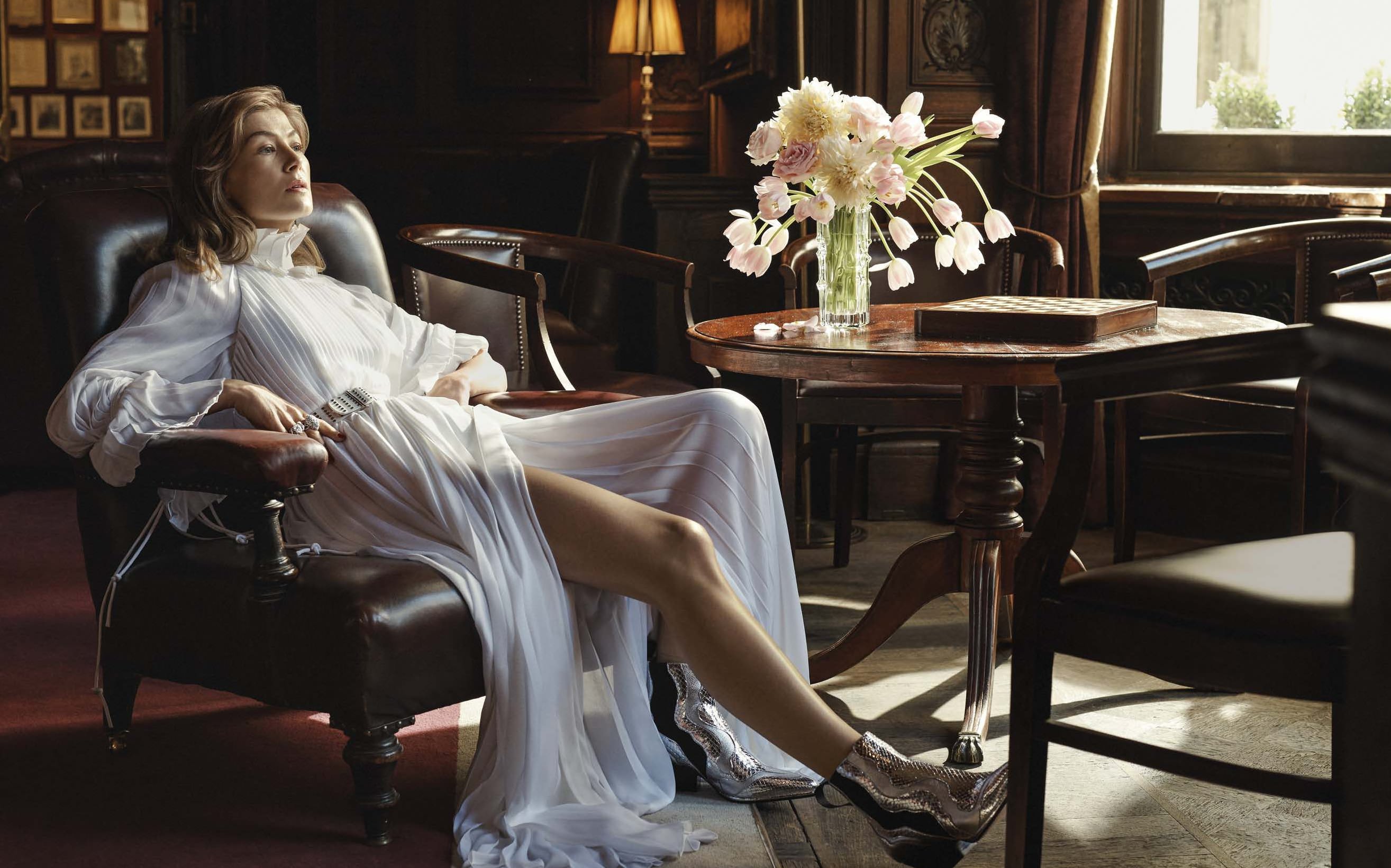 ROSAMUND PIKE takes on the heroic life and tragic death of the first lady of foreign correspondents.

I first met Marie Colvin in 1992, by the photocopier in the offices of the Sunday Times in London. I had just come from reporting on the war in Bosnia and was grubby and disheveled. She was wearing a pale, fitted Calvin Klein sheath dress and very high heels, and her wild hair was tamed into a sleek chignon. She had just come from a wedding, she explained as she extended her hand and in a gruff, cigarette-drenched voice, said, “Hi. I’m Marie.” During most of her working life Marie looked nothing like the sleek woman by the copy machine. As a senior foreign correspondent for the Sunday Times, she worked in war zones in the Middle East, Asia, and Africa. Her wardrobe usually included a flak jacket, heavy boots in which she could run from danger, and her famous Burberry leather jacket. But she always packed beautiful clothes, and she was fond of wearing Bass Weejun penny loafers—with pennies inserted—in her downtime at whatever bar was nearest the front line.

That was the beauty and complexity of Marie. The New York City native led a glamorous and giddy life in Notting Hill, London, where we both lived in the 1990s, throwing some of the best parties I’ve ever been to, complete with some of the most amusing characters in England and a guaranteed hangover the next day. But when the parties were over, she became a different woman: fearless and uncontactable in her professional life. She managed to combine the two, but she nevertheless remained utterly contrarian. “My suitcase just got robbed,” she told me once, when we ran into each other in Libya around the time of the fall of Muammar Qaddafi. “They left everything exactly the way I packed it but stole all my La Perla bras.”

In real life the 39-year-old British actress Rosamund Pike, who plays Marie in the new film A Private War, which chronicles her life from 2002 to 2012, doesn’t resemble her. Tall and willowy, her blond hair gathered in a soft ponytail this afternoon at a Manhattan hotel, Pike is more approachable than Marie was at first. She’s warm and empathetic, hugging me when we meet and pouring mint tea. She wraps her arms around her legs and talks about work, life, and her beliefs. Perceptive, sensitive, committed, you can’t help feeling this is a real woman, a serious actress who is the best possible choice to play the part.

Onscreen Pike uncannily becomes Marie, down to the clothes— including a pale green Oxford I could swear I’d seen Marie wearing. Her posture, her voice, her figure, the angle of her chin when she talks: This is Method acting to the extreme. Marie was feisty and smart but complicated, and she could be mercurial. She was plagued by demons, and she repeatedly chose love and passion above stability. Pike has mastered this mix, but in an unself conscious way. Before I saw the film, a friend who had caught a preview in London wrote me, “It’s freaky how much she looks like Marie.”