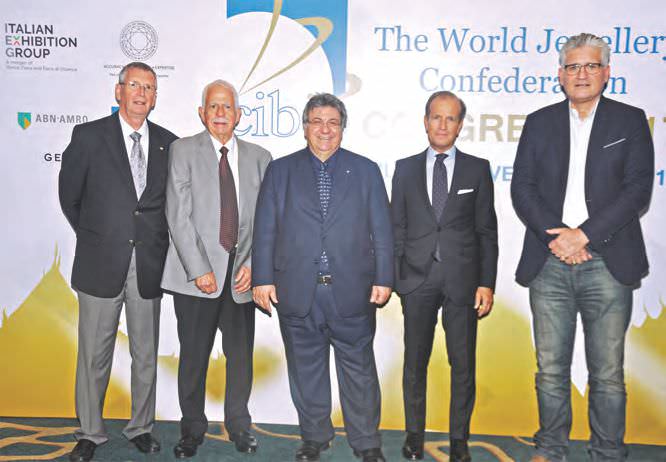 The Confédération Internationale de la Bijouterie, Joaillerie, Orfèvrerie (World Jewellery Confederation), better known by its French acronym CIBJO, successfully concluded its annual Congress in Bangkok, Thailand. The three-day event, running from November 5th-7th, brought from around the world some 150 official delegates and a total about 300 participants, and covered a wide range of issues on the agenda of the international gemstone and jewellery industry. There was a strong focus on responsible sourcing, Corporate Social Responsibility and sustainability, particularly in the coloured gemstone sector. The event was preceded by the three days of pre-Congress steering committee meetings and the first World Ruby Forum.

Meeting on the final day of the Congress, the CIBJO general assembly elected Dr. Gaetano Cavalieri to another two-year term as CIBJO president. For the first time, three vice presidents were elected: Roland Naftule of the United States, Eli Avidar of Israel, and Corrado Facco of Italy. Marc-Alain Christen of Switzerland was reconfirmed as the organisation’s chief financial officer, and a new board of directors was elected, also for a two-year term.

In his speech to the packed assembly hall, Chan-o-cha stressed his government’s support for the Thai gem and jewellery industry, which is the country’s third largest export earner. He said, “We need to take care of the people in the value chain to make sure that nobody is left behind, especially the lower income workers, and we also want to ensure transparency and good governance. Thailand is committed to improving our products and to becoming a global jewellery hub in the next five years, and I hope we can grow stronger together and enable Thailand to secure this vision.”

In his address, Cavalieri stressed the role of the Congress and the mission of CIBJO. “As most of you know, a CIBJO Congress is not a commercial event. There are no gemstones or jewellery on sale. We gather each year to talk about rules and regulations, standards and ethics, and strategies for the years ahead. We do so out of the firmly-held belief that, in order to succeed in business, we have to conduct our affairs in a manner that is beyond reproach, and we need to see over the horizon. The subjects we address, make that possible,” he said.

“We have no illusions. Jewellery and gemstones are luxury products that consumers purchase because they want to, and not because they have to. For us there is no margin of error. If we lose the confidence of our consumers, and in so doing undercut the value of our product, we will not remain in business, let alone prosper,” Cavalieri stated.

MORE STORIES FROM SOLITAIRE INTERNATIONALView All