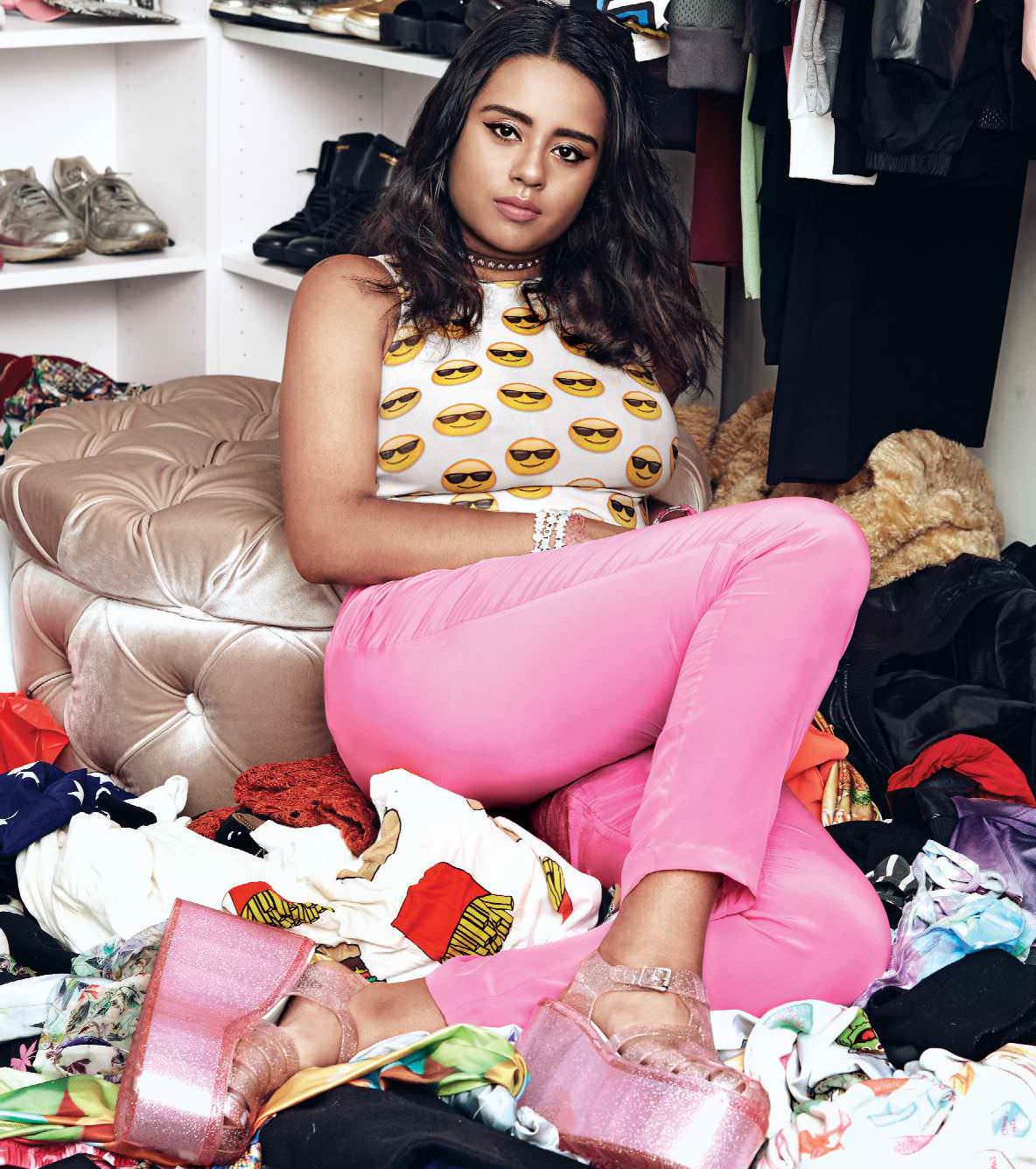 If you haven’t heard of Shop Jeen, that’s because you’re not a 19-year-old with pastel-pink hair and an iPhone plastered in emoji stickers. Crop tops are probably not your favorite separate, and four-inch platform sneakers are not your go-to footwear. The Generation Z–whispering web shop, founded three years ago by a New Yorker named Erin Yogasundram, now 23, from her George Washington University dorm room, should come with a seizure warning—and maybe even a trigger warning. Type in shopjeen.com, and a Japanese music video for a band called Ladybaby might automatically start blasting, while the home page quivers with gifs of LED-lit high-tops and tank tops that say ask your boyfriend how my ass taste. This is what cool looks like right now for a particular subset of 14-to-22-year-olds. It’s a visual language that’s basically early internet clip art on crack—like the work of artists Cory Arcangel and Ryan Trecartin brought to the masses via Tumblr, co-opted by the store VFiles, and now sold to young people in the form of $32 hats that say yes, daddy?

The site sells a mix of products from its new in-house line Netgear90 and like-minded streetwear brands—O-Mighty, Huf, Married to the Mob—plus junky knickknacks like glitter iPhone cases and glow-in-the-dark toilet paper. The effect is a twisted combination of a vintage Oriental Trading catalogue, some sort of high-concept New Museum Triennial commission, and one of those stores on Canal Street that sells fuck you you fucking fuck T-shirts. Even in the grand tradition of stores for young people whose appeal is totally lost on grown-ups (Delia’s, Limited Too, Hot Topic, Spencer’s), Shop Jeen feels particularly designed to rankle adults. (See, for example, a $12 thong that reads, simply, anal?)

The site’s 400,000 Instagram followers, though, are rabid in their devotion: “my girl boners explode whenever I see your posts on any social media since I follow you on all of them.” “YOU GUYS HAVE TAUGHT ME THAT I SHOULD NEVER HIDE THAT IM A BAD BITCH. UR CLOTHES ARE RAD AND ERIN IS BAE AF.” Translation on that last part is, more or less, “Erin is the best.” Part of the fanaticism surrounding Shop Jeen is targeted at Erin herself; her illustrated mug is plastered on the home page in a dedicated “These Are the Things Erin Loves” box, and many of Shop Jeen’s followers refer to her as “Mom.” When you buy a 69 me pillow set on Shop Jeen, you’re not just buying a 69 me pillow set, you’re buying a 69 me pillow set to match your best friend Erin’s. As she puts it: “There are not that many companies where you see the CEO’s face in your head, other than, like, Steve Jobs.” 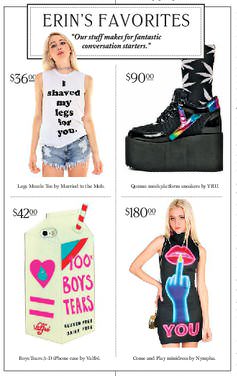 When i meet erin in Los Angeles, she and her 26-year-old creative director, Amelia Muqbel, have been sharing a king bed in a new apartment building around the corner from a Pressed Juicery on Hollywood Boulevard while working in a makeshift office downstairs. The temporary space— they’re currently hunting for a proper office—feels like the bachelor pad in the Wall Street movie Boiler Room. Though instead of just a leather couch and an oversize TV, there’s also generic gray Ikea furniture, magenta beanbag chairs, and a life-size Harry Styles cutout with a photo of a Chihuahua stuck to his face. Their social-media presence leaves the impression that their lives are one big Lisa Frank rainbow-sprinkle party, but at work Erin and Amelia are quiet, even a little awkward.

Amelia, who has a tiny gold Nike swoosh glued onto her top left front tooth, is Erin’s best friend, the company’s first employee, and a social-media star in her own right. (She’s huge on Snapchat.) She’s responsible for the look of Shop Jeen. She says she spends hours on Tumblr and Instagram sniffing out new designers. “I’ll find myself up late at night, my thumb just scrolling through Tumblr. I’m probably the oldest person on there; most of the people I follow are 14 and 15.” Amelia says she’s “really good at key words.” For instance: “I’ll type in Harajuku [into Tumblr] and find some random cute pink bomber.” The girlie ’90s look, which was very big last year, is less so now;“we’re moving from Baby Spice to more Sporty Spice,”