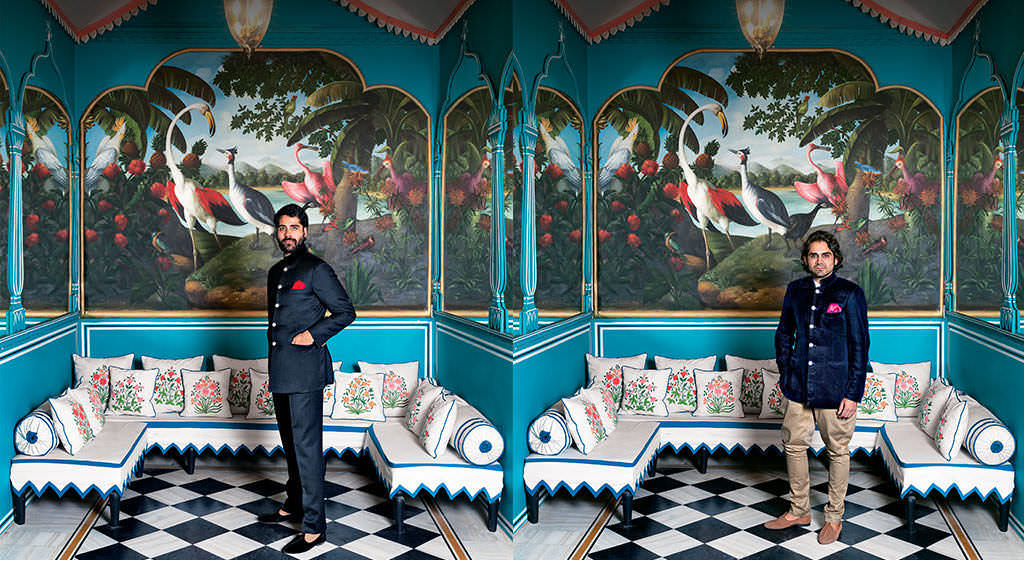 A jewelry feud, set in Jaipur and on Madison Avenue.

On a recent morning when Siddharth Kasliwal came downstairs, his mother dropped a sheaf of papers on the table in front of him. “Potential brides,” he said later. “There were some party pictures, clippings about their families. My mother is getting impatient. There are 15 to 20 serious candidates, and already in my life I’ve met seven or eight of the girls.”

Siddharth, or Sid to his friends, is 31: handsome, cultured,deferential, occasionally preening—at once humbled and entitled by his privileged birthright as a ninth-generation co-owner of the Gem Palace, India’s most glamorous jewelry business. The Gem Palace was a sleepy favorite, before he was born, of Jackie Kennedy, Marella Agnelli, and Lord Mountbatten, among others. Now there are satellite boutiques around the world, including in Istanbul, Tokyo, and New York. His father, Munnu, and an uncle, Sanjay, were the public faces of the business for decades. But Munnu died of brain cancer in 2012 at 54, and Sanjay has spent much of the past few years receiving treatment in Europe for lymphoma. (The family attributes their illnesses to the cellphone towers that used to stand near their home.) That has left the two oldest men of Sid’s generation—him, along with Sanjay’s son, Samir—as the cousins in whose uncallused hands the future of the Gem Palace rests.

“It’s more pressure, man, heavy-duty responsibility. But it’s a dream life,” Sid said over the late-breakfast buffet at Rambagh Palace, the last-days-of-the-Raj hotel in Jaipur where he often takes his meals. Still, without a bride, everything feels incomplete, unresolved, “as if I owe an outstanding debt to my parents.” He has no problem with the inevitability of an arranged marriage. “The logic of having two families join forces makes good sense, believe it or not,” he said. “In modern Indian society, you are introduced to a woman very formally, with mothers and fathers present, but from that point, you get together discreetly to see how you like one another. You say, ‘We are both adults here.’ ”

The other day, Sid was riding across town with some British clients visiting from Morocco—a lighting designer and his wife, a former model. Sid had his driver pull over beside a stucco hut that had been built into a gully. It was a tiny Muslim temple, and even though Sid and his family are Jains, he said, “whenever I pass this place I stop to make a wish because one of my best friends is Muslim.” He found a few coins and blew a kiss into his hand before tossing them out the window onto the building’s tin roof.

There were jokes all around about what kind of woman he’d wished for.

“Someone who will love me for my smile,” Sid said.

He threw more coins. “Someone who is kind, a pretty girl who will get along with my mother.”

One last handful of change went skyward, then landed with a gentle plink.

“And, of course, someone who will understand the legacy and complicated family dynamics of the Gem Palace.”

That turns out to be no small order. “It’s more like Peyton Palace—there’s so much intrigue in that family,” says Lisa Fine, an American textile designer and longtime friend of the Kasliwals. Adeline Roussel, a family friend and jewelry designer, says, “The Kasliwals are a movie, a soap opera, Bollywood.” And even though it’s a soap opera that Sid and Samir inherited from their fathers, it plays out mostly between the two of them, every day. When Sid returned from the temple to the canopied garage at the Gem Palace, he bumped—quite literally—into Samir, who had put in a long day already.

“Hello,” said Samir, without affecting any muscular movement that might suggest a reciprocal embrace. He stopped, looked at Sid, then walked away.

Sid and Samir are equal partners in their family business, but around the shop they seem barely on speaking terms. They say this has mostly to do with “a different business point of view,” and that friction alone is enough to explain plenty. Because although they share staff and facilities and buy gemstones together as co-owners (along with a few other relatives), Sid operates as an entirely separate concern, selling his wares through a by-appointment-only business. His production and those appointments take place upstairs at the Gem Palace, where he maintains a private lair. As Sid says, it’s complicated. Clients find it confusing, and employees (both the Gem Palace corps at large and Sid’s small personal retinue) consider it an unspoken article of faith—like a household a man shares equally with his wife and mistress, except that neither Sid nor his cousin is anything but a legitimate heir.

Confusing matters further is the fact that the two branches of the family have established dueling shops in New York. In 2014, Sanjay and his children (Samir has a younger sister, Shalini) opened a tiny storefront, which stocks Gem Palace items, under the name Sanjay Kasliwal, on Madison and 76th Street. This joined Munnu The Gem Palace, a studio established—by Munnu and Sid alone—on East 74th Street in 2006. Munnu The Gem Palace sells only Sid’s and his late father’s jewelry (but absolutely nothing you can buy at the “Sanjay Kasliwal” store or any of the Gem Palace retail spaces).

Sid offers a couple of commercial analogies for his arrangement. If the Gem Palace is Giorgio Armani, then the operation his father started is sort of the Armani Privé line. Or, he says, think of Destiny’s Child. “You’re in the group, but you want to be Beyoncé on your own,” he explains. “And after my father passed away, Sanjay opened his own store apart from the Gem Palace in New York. That was his choice.”

In response to that, Samir says, “My father is not the Beyoncé in this family. I think it’s very clear who is Beyoncé.”

Sid is petite and shaggy, with rustic facial hair, a wardrobe heavy on velvets, and a disarmingly youthful tendency toward self-acclaim (“That was pretty quick of me, wasn’t it?” is a typical followup to one of his own ripostes). Samir is tall and polished (six-foot-two to Sid’s five-seven), immaculate in bearing, profoundly reserved, and of a barely Subcontinental aesthetic. Because Samir’s mother is Italian, he spent much of his childhood in Bologna. When he speaks Hindi, Indians tend to respond in English. Sid refers to him as his Italian cousin, especially when acknowledging that Samir is, by three months, actually the older of the two, as in, “I’m the oldest Kasliwal man of my generation, not counting my Italian cousin.” Somebody like a Godfather-era Al Pacino could play Samir if there were ever a Westernized, Hollywood version of the Gem Palace story, and the role of Sid is probably meant for Russell Brand or another smoothie in the Austin Powers mold who could pull off a Nehru collar.

Though the two lived for years in the same large house on the outskirts of Jaipur, alongside their parents, siblings, cousins, grandmother, and another uncle and aunt, Samir took the radical step two years ago of moving by himself into an apartment building downtown. “I think after a certain age you just want to live on your own,” he explains. But food also played a role. “I was raised by my Italian grandmother eating meat. My father’s family are Jains”—whose ancient religion espouses nonviolence toward all of Earth’s creatures. “I tried to live in the veg house, but I couldn’t do it.”

Sid considers Samir’s move a rejection of Kasliwal values. “For me to live away from home like that would be not so cool,”Sid says. “But Samir’s not really Indian. So it’s probably different.”

The Kasliwals’ most devoted clientele are non-Indians. “They sell a lot to people from overseas who desire a piece of the Maharaja’s India—not to the modern customers of contemporary India, the everybody- wants-a-slice-of-the-pie class,” says Vinod Kuriyan, one of the founders of the jewelry-news site GEMKonnect. “It’s a very niche product. You might compare it to Bulgari or Chaumet before they were bought by LVMH—exclusive, historic, and with a strong persona behind the brand.