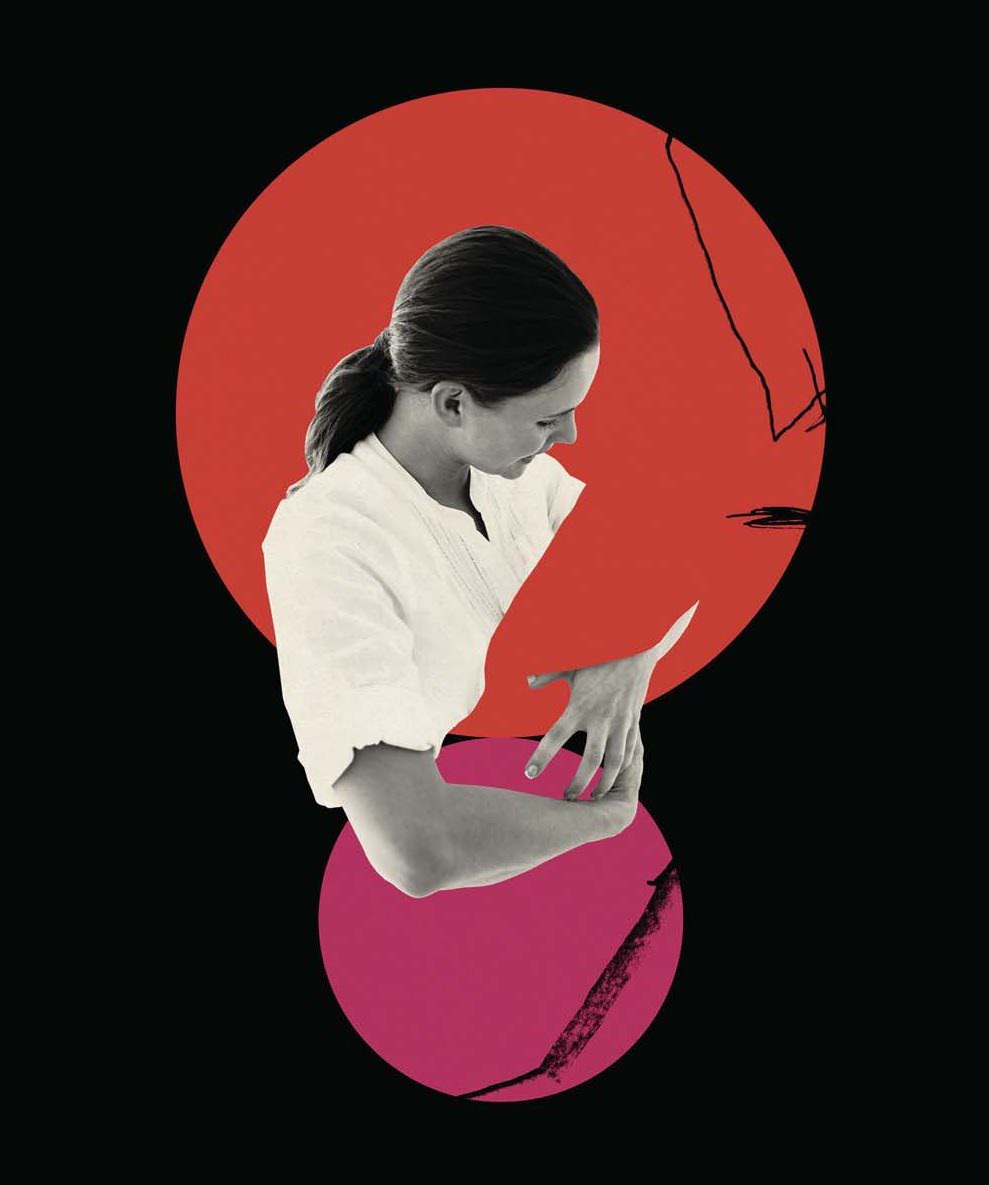 In March, a fertility clinic in Cleveland destroyed more than 4,000 frozen eggs and embryos. This is the story of the women whose hopes of motherhood were lost that day. Among the 950 patients impacted are a trio of cancer survivors who told Marie Claire in exclusive interviews about their fight for reform in a notoriously unregulated industry

INSIDE A SMALL CLOSET UNDER THE STAIRS in Rachel Mehl’s impeccably decorated two-story home in Pittsburgh sits a steel-gray garbage bag knotted at the top to conceal an infant bouncy chair that features pastel drawings and bits of well-known nursery rhymes: “Humpty Dumpty,” “Little Boy Blue,” “Hickory Dickory Dock.” Mehl bought the chair back in 2003, when her sister-in-law was pregnant; she purchased one for her niece and an extra for the child she herself hoped to have one day. “I remember my niece sitting in her chair and loving it,” says Mehl, 40. “And I thought, My baby is going to love that too.”

The chair has been with her through many life-changing events: five jobs, three boyfriends, three homes in two cities, and one cancer diagnosis. In 2016, days after her 38th birthday, Mehl learned she had an aggressive form of breast cancer, and her doctors warned that chemotherapy would likely destroy her ovaries, rendering her infertile. They gave her the option of delaying treatment—jeopardizing her survival—in order to freeze her eggs, thus preserving the chance to have a biological child in the future. For Mehl, it wasn’t even a question. “Many people know what they want to be when they grow up. Truly, my only ambition was to be a mom; it’s the only certainty I’ve ever had,” she says. “I would work jobs, but it was all just waiting until I found the guy, settled down, and had kids. I felt like that’s when my life, my dreams, would actually begin.”

Mehl was referred to a fertility center run by University Hospitals (UH), an affiliate hospital of Case Western Reserve University, in Cleveland, known regionally for its fertility expertise. For three weeks, she injected herself with hormones—paid for by the Livestrong Foundation’s Fertility Program, which helps cancer patients cover fertility preservation; the remaining cost was covered by a donor-funded grant program at UH—all the while wondering what impact her decision would have. “Even though I consciously chose to delay treatment, it was constantly on my mind: Is the tumor growing inside of me? How quickly? At the end of these three weeks, is the cancer going to be everywhere?” Mehl says. “It was terrifying.” In the end, she felt the risk and fear had been worth it when she found out her doctor was able to retrieve 19 eggs. “I felt empowered,” continues Mehl, who works as an operations management consultant for small businesses. “When you are diagnosed with cancer, you lose control of everything. Your doctors tell you what to do, and you’re just sort of on this train. Freezing my eggs felt like I was taking back control of something—I had a decision in this—and I could potentially still retain that future I wanted.”

After the retrieval, Mehl went through four rounds of chemotherapy, daily bouts of radiation, and a lumpectomy. By the end of the year, she was told there was “no evidence of disease” left in her body. Her type of cancer has a high rate of recurrence, and doctors advised waiting to get pregnant for five years, so she tried to get on with her life, knowing her 38-year-old frozen eggs could be used to impregnate her well into her 40s.

Or so she thought.

In March 2018, four months after learning her cancer had returned, while she was undergoing chemotherapy for a second time, Mehl received a letter in the mail from UH informing her that there had been “an unexpected temperature fluctuation” in a tank where frozen eggs and embryos (fertilized eggs) were stored at the fertility center and directing her to call a dedicated phone line for more information. “I felt like the wind got knocked out of me when it set in what they were saying,” Mehl recalls. “I had just had such a string of bad luck, so even though they left room that maybe my eggs weren’t affected, I just knew.”

Her gut was right. Mehl soon learned she was one of 950 patients whose genetic material was destroyed when the temperature inside the storage tank rose more than 150 degrees. In a letter dated March 26, UH wrote, “We are heartbroken to tell you that it’s unlikely any [of the more than 4,000 eggs and embryos affected] are viable,” meaning absent a medical miracle, Mehl will never be able to give birth to a biological child. “It’s hard enough not to know if I have a future, and then to try and reformulate what that might look like after a lifetime of assuming it would be having a family—I don’t even know where to begin,” Mehl says, tears brimming in her big green eyes. “When you put your trust in people and practices and institutions and they fail you, what are you left with?”

At first, Mehl wasn’t mad; cancer has given her an understanding of the bad, uncontrollable parts of life. “I knew this was going to have a massive impact, and I felt for the UH employees who might lose their jobs,” she says. “I felt compassion for them.” But the more Mehl learned about what occurred at the fertility center—the careless way her precious genetic material was handled, and how the industry as a whole lacks government oversight and regulation—her furor bubbled. “I am very, very angry now,” she says. “I just don’t know how there could be such disregard for eggs and embryos. It’s unfathomable.”

Mehl and two other women who lost eggs in Cleveland, Danelle Yerkey, 38, and Sarah Deer, 31—fellow cancer survivors who met through a Facebook group for Pittsburgh women with the disease—banded together, with representation from famed civil-rights attorney Gloria Allred and others, to file lawsuits. “Part of the beauty of being a woman is that you get to choose if you’re going to be a mom. That choice was taken away from me,” says Deer, a middle school English teacher who planned to use the eggs to get pregnant with her husband in 2020, when she hopes to have been cancer free for five years. “Those eggs were our plan B, a security blanket after cancer. To lose them, that was the last piece of me: my old life, the me that I knew before cancer, before my new reality set in.” Deer and the others are suing UH for gross negligence and breach of contract, among other charges. “The dreams they had to become biological parents were shattered. It’s devastating; it’s catastrophic. I think anyone who has any feelings at all would want to help them, as I did,” Allred says. “There has to be accountability here. Saying you’re sorry is not enough.”

Mehl, Yerkey, and Deer want far more than an apology: They want change, reform, regulation—something to prevent other women from having to suffer through what they’ve experienced. And that’s key because what happened to them likely occurs at fertility clinics far more often than the public is aware. In fact, the very same weekend as the incident in Cleveland, a fertility clinic in San Francisco announced that it, too, had experienced a tank failure, compromising thousands of eggs and embryos and impacting more than 400 individuals and families. Further, though mass incidents are rare, lawyers interviewed for this story say they have represented dozens of women nationwide whose genetic material was negligently destroyed at fertility clinics. “This is not the first time. We are aware of other incidents where eggs and embryos have been lost all over the country, from California to Ohio to Texas and in between,” says Adam Wolf, a partner at the San Francisco–based law firm Peiffer Wolf Carr & Kane. “Individuals and couples need to investigate seriously the fertility centers in which they put so much trust. These are not just storage centers where you store art or your tricycle; it should be vitally important that they abide by the highest standards of care and act in the most ethical way possible.”

FORTY YEARS AGO THIS JULY, Louise Joy Brown, the first so-called test-tube baby, the product of the first successful in vitro fertilization (IVF), was born in England. Two years later, in 1980, the first IVF clinic opened in the U.S., ushering in a new era of assisted reproductive technology. The milestones kept coming: In 1983, the first pregnancy using a donated egg was reported; the following year, a baby was born using a frozen embryo; 1986 saw the first pregnancy using a cryopreserved egg. Between 1987 and 2015, more than eight million babies worldwide were born with assisted reproductive technology, more than one million in the U.S. alone.

In 2012, the American Society of Reproductive Medicine said egg freezing had demonstrated such success that it should no longer be considered experimental (even though the chance of a frozen egg becoming a baby ranges from 4.5 to 12 percent). The number of women freezing eggs has increased sharply in recent years, from 475 women in 2009 to 6,207 in 2015, according to the latest data available from the Society for Assisted Reproductive Technology (SART). In that same time frame, the number of IVF cycles increased by nearly 60 percent, from 146,244 at 441 clinics in 2009 to 231,936 at 464 clinics in 2015, according to SART. Women pay around $15,000 to hormonally stimulate and retrieve their eggs—most often out of pocket, as most health insurers do not cover the procedure— plus an additional fee to store them, which ranges from $300 to $1,000 a year.