Shop Enabled
Three Is A Charm 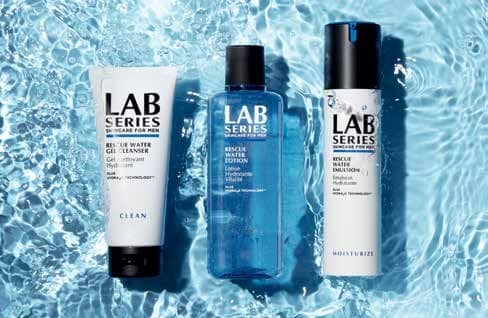 Lab Series levels up with their latest range of three products — the Rescue Water 3-step Regimen.

In math, the number three is a prime and triangular number. In many religions around the world, three is used as a sacred number — the number of times a ritual is performed. Also in fairy tales, most stories begin with three. However, Lab Series’s latest Rescue Water 3-step Regimen has less esoteric qualities in its storytelling. It is practical in its performance — it hydrates the skin using Hydra2G Technology™ which in turn reinforces the skin’s barrier against damage while keeping it plump and refreshed. The 3-step Regimen is also pragmatic in its storytelling — no smoke and mirrors, just guarantees of peak performance.

According to the American skincare brand, the numbers do not lie.

72 hours is how long one’s skin is hydrated after just one use.

A cleanser, toner and moisturiser — the necessary, basic three steps of a man’s grooming routine.

The number one bestseller that is the existing Lab Series Rescue Water Lotion whose hydrating properties now comes in the form of a cleanser and emulsion.

The percentage of men who had their skin’s moisture level increased by 1.13 times after seventy hours post-usage.

The number of participants out of a focus group of 10 who said that their skin felt healthier after one use.