To Buy Or Not To Buy! 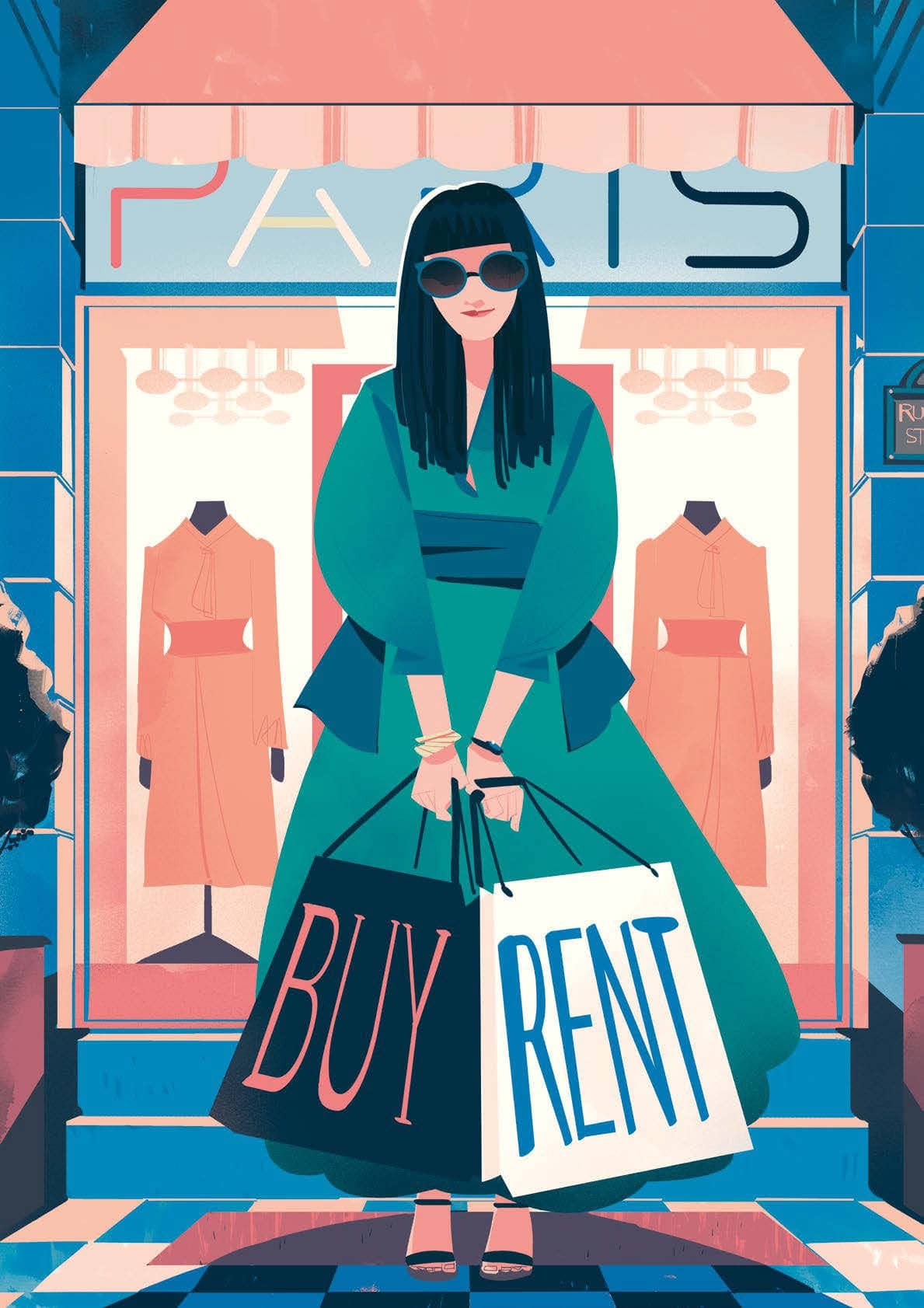 As the world’s eyes are opened to the devastating effects of fast fashion — including human rights violations and environmental damage — author Dana Thomas explores an alternative future for fashion. And it’s brighter than you might expect.

What if you eschewed the notion of ownership entirely? When you say that all you have are the clothes on your back, it usually means you have zero, zippo, zilch. What if you did that with intention?

What if you bagged buying clothes and rented them instead?

Renting clothes for men is not radical. My high-school boyfriend rented his tux for the prom. My husband rented his morning suit for our wedding.

But women? For anything other than for a costume party? Unthinkable.

Because the fashion industry has always wanted women to buy.

How else could they keep the cycle going and the profits rolling in? Then, along came the sharing economy, the idea that we don’t have to possess something to consume it. We share cars, music, homes. It was only a matter of time before the sharing economy moved into our wardrobes.

If the internet and social media kicked off the democratisation of fashion, renting solidified it. Renting clothes gives the modestly off consumer access to the same level of on-point luxury and style — if briefly — that the wealthy always have, and they can get it right now, for a fraction of the (oft-overinflated) retail price. The only items you’d ever need to buy are underwear, sleepwear, swimwear and shoes. Renting, more than any other apparel business model, fulfills legendary editor Anna Wintour’s desire to give as many people as possible the chance to wear Fashion. And to do so daily.

Unquestionably, the leader in garment sharing is the New York-based Rent the Runway. Founded in 2008 by a pair of Harvard Business School students, Jennifer Hyman and Jennifer Fleiss, it focused for nearly its first decade in business on special occasion clothes — prom gowns, party garb, the non-celebs’ version of red-carpet dressing.

It wasn’t easy to get brands onboard. Many were worried that renting could cannibalise their sales. When Rent the Runway approached New York-based Derek Lam, the label’s chief executive, Jan-Hendrik Schlottmann, wondered if making the clothes so available would cheapen its reputation. But then he grasped that “the Rent the Runway customer is not a customer we’re losing,” he said. “She’s not going to spend $2200 on a dress.”

No, she’s the customer who goes to fast fashion and buys knockoffs. Putting the originals on Rent the Runway at roughly the same price could be a way to fight back.

Consider Mary Katrantzou’s ongoing war with counterfeiters. I googled her name and “rent”, and up popped girlmeetsdress.com, a British fashion rental site with a few of her digital printed dresses renting for about $90. Well done, I thought. If women can rent Katrantzou’s originals at the same price as the rip-off— and love it so much more — maybe the rip-off-market will wither and die.

In 2016 — the year Rent the Runway finally turned a profit — it introduced a subscription service for everyday clothes, such as suits, day dresses and outerwear from current and past seasons, as well as costume jewellery and accessories. According to Hyman, 75 million professional American women spend $4400 or more a year on clothes that they keep — it’s a fixed selection. You’re stuck with what you have. And there are still days you stare at your wardrobe and feel like you have nothing to wear.

For about $228 a month — or $2740 a year — customers could retain four looks while returning what they were ready to give up and welcoming in something new. (There is also a more limited $128-a-month subscription, called ‘RTR Update’, for those with a slimmer wallet.) The cost to rent an item is 10 to 20 per cent of full retail. Rent the Runway’s ambition, Hyman said, is to put fast fashion giants “out of business”.

And they very well might. Renting fashion could change the entire shape of the apparel industry. Imagine if that $4400-a-year clothing budget was spent on renting instead of buying. Fewer clothes would be made, and what is out there could be circulated more, tossed less. The “cerulean blue sweater” trickle-down model would become obsolete; we’d all be able to wear the spiffy, sexy original rather that the poorly made, mass-marketed digestion of it.

Rent the Runway’s customer base is broad, from mothers of the bride to glossy magazine editors, who — despite what they project — have limited disposable income. One rented her wardrobe from Rent the Runway to attend Chanel’s fashion show in Havana in 2016; she expensed it. Some Rent the Runway members drop by the showroom and get dressed for work or a date on the spot. With an unlimited subscription, they can choose their frock, scan the tag, hop in the fitting room, quick change and be on their way. In 2018, Rent the Runway installed drop-off boxes at 15 WeWork locations — sharing clothes in shared offices.

Customers leave comments on the site about the garments they’ve rented, so fellow renters know what they are getting into — another revolution in the industry. Fashion has always been super-secretive: one never revealed who made an outfit, how much it cost, if it scratched or weighed a ton or was insufferably hot or impossible to sit in. Fashion has always been about appearing effortlessly, painlessly, graciously perfect. Renters’ reviews reveal its warts.