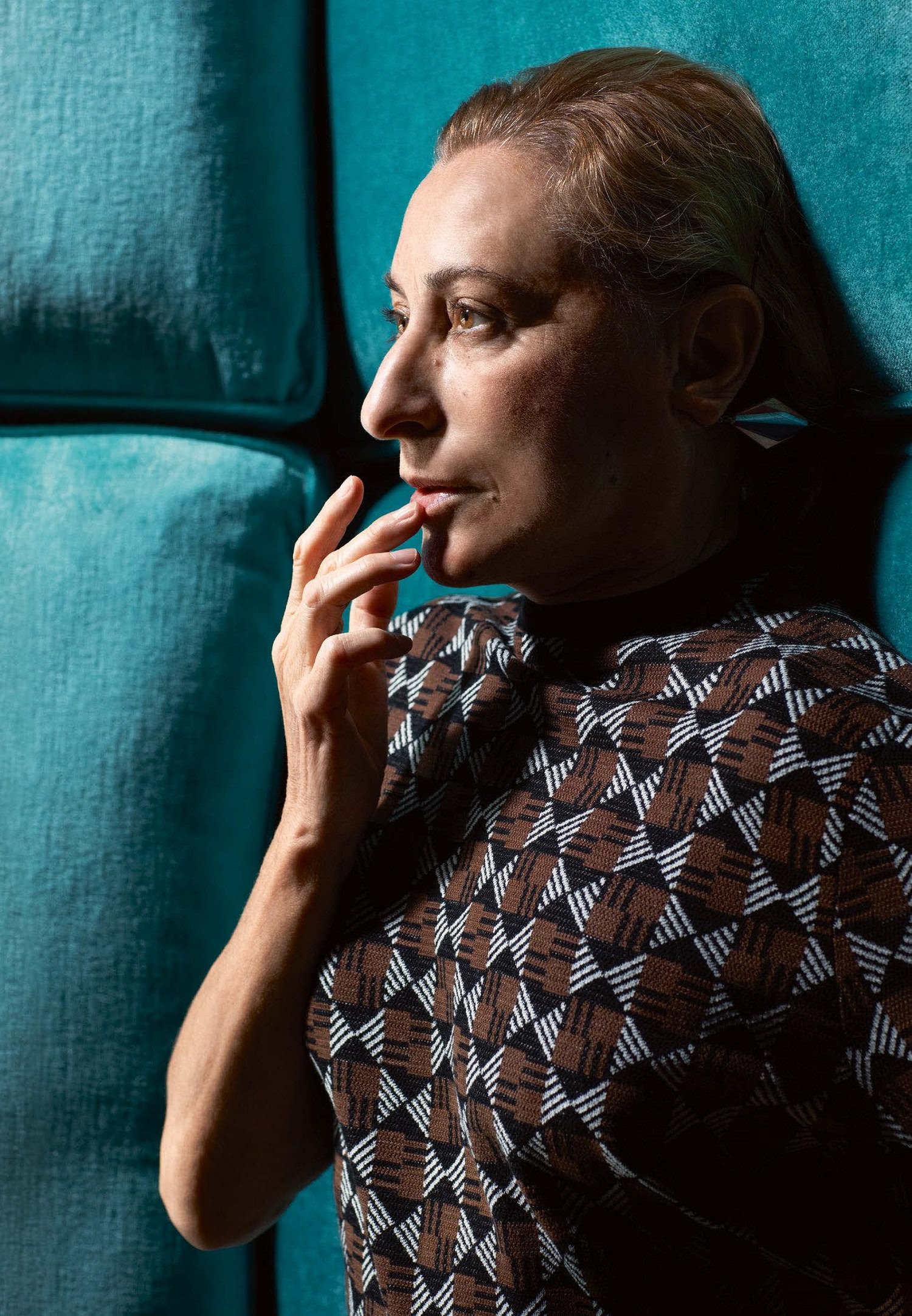 The new Torre art space at the Prada Foundation reflects the brilliance of the woman behind it and houses a personal collection that bucks convention, much like its avant-garde owner. In a rare interview, Justine Picardie meets Miuccia Prada, a globally revered fashion designer whose true passions appear to be politics and art

Justine Picardie
It was a sunlit Italian summer’s morning when I visited the Torre, the newly opened art space at the Prada Foundation, in preparation for my meeting with Miuccia Prada herself later that day. The Milan sky was such a bright blue that the pristine white concrete walls of the Torre seemed even more dazzling in contrast, and the 60-metre-high structure looked like a gleaming sculpture, rising above the group of buildings that make up the Prada Foundation, designed by the Dutch architect Rem Koolhaas.

As it happens, I had already seen the Torre by night, six months previously, at the Prada show in February, where the collection had been presented on the fourth floor of the building. The construction was not quite finished at that point, which added a hint of danger to the proceedings; a black mirrored floor appeared to give way to a void of darkness, while beyond the vast floor-to-ceiling windows the audience could see the city skyline illuminated by neon Prada signs, hovering like cartoon UFOs (a spider, a monkey, a dinosaur among them). As I sat and watched the show itself — which was filmed by a sinister drone — it occurred to me that the experience was more akin to watching a piece of performance art. These were not seductive clothes that we were seeing; instead, the parade of models wore rubber boots, fluorescent padding, utilitarian layers of workwear over tulle dresses, with ID cards attached, as if in a sci-fi dystopia.

The show was challenging — even puzzling — but provocation has been Miuccia Prada’s signature ever since she entered her family’s accessories business four decades ago. The brand had been founded in Milan in 1913 by her grandfather, Mario Prada, who became a successful manufacturer of luxurious leathergoods for the Italian elite. After his death, his daughter, Luisa (Miuccia’s mother), took over the business, and she was followed in turn by Miuccia (or Mrs Prada, as she is known by everyone in her company and the wider industry). At the time, she seemed an unlikely entrepreneur: a former member of the Italian Communist Party, she had a PhD in political science from the University of Milan and had subsequently trained as a mime artist at the famed Piccolo Teatro, where she performed for several years. Prada’s first big success was the range of black nylon backpacks and bags that she designed in 1985. Three years later, with the encouragement of her husband and business partner, Patrizio Bertelli, she launched her womenswear line with a show in 1988 that she described as “uniforms for the slightly disenfranchised”. Ever since then, her influence has grown, so that now Miuccia Prada is among the most admired — and endlessly scrutinised — designers in the world; a billionaire powerhouse who remains utterly true to her creative convictions and whose work is so original, unpredictable and singular that it is near-impossible to copy or fake.

Thus it is that when the time comes for me to meet her, after my morning at the Foundation that houses her and her husband’s art collection, I am feeling intrigued, but also a little scared. She rarely gives interviews, and this one has taken many months to arrange. As befits the sphinx of fashion, Miuccia Prada is also wreathed in myths. One is that if she is bored by a conversation, she may decide to disappear down a chute in her office — this helter-skelter slide, designed by friend and artist Carsten Höller, starts on the floor of her studio and spirals through the building to the courtyard outside.

As it turns out, she is sitting behind her desk, a smile on her attractive face, and an alert look in her hazel eyes. She is wearing a bold blue knee-length skirt-suit of her own design. The effect is a charismatic combination of ladylike elegance with a slightly subversive twist (the reworked Prada logo of the show I’d seen in February is on her lapel, and for reasons I cannot explain, this looks seditious, rather than corporate).

We begin by talking about the Torre, and the effect of seeing it in daylight. “It was a long and difficult process to build,” she says, yet despite the complications, she is happy with the result and with the setting overlooking an abandoned railway track that has been colonised with wild grasses. “Now it’s so beautiful, it’s perfect like this.” Mrs Prada pauses, and then a look of worry passes across her face. “I’m terrified that this natural space will be ruined. It’s much more easy to ruin a garden than a home, because bad homes, somehow, are still used, but bad gardens … I can’t stand bad gardens.” And then she laughs, as if at the strength of her own reaction.