This season might be all about ’70s bourgeois chic but Nicolas Ghesquière has always been an avowed ’80s fanboy. The fashions of the era were polarising—loved and loathed in equal measure—so it seemed fitting that Ghesquière would erect the equally polarising façade of the Centre Pompidou in the Louvre to frame his latest collection. The clothes were an homage to the decade with faces framed by sculptural ruffles, oversized lapels or crystal-encrusted neckerchief collars. Skirts were short with flippy hems, and shoulders and sleeves were of statement-making proportions—all grounded by flat boots and shoes for a decidedly modern attitude. 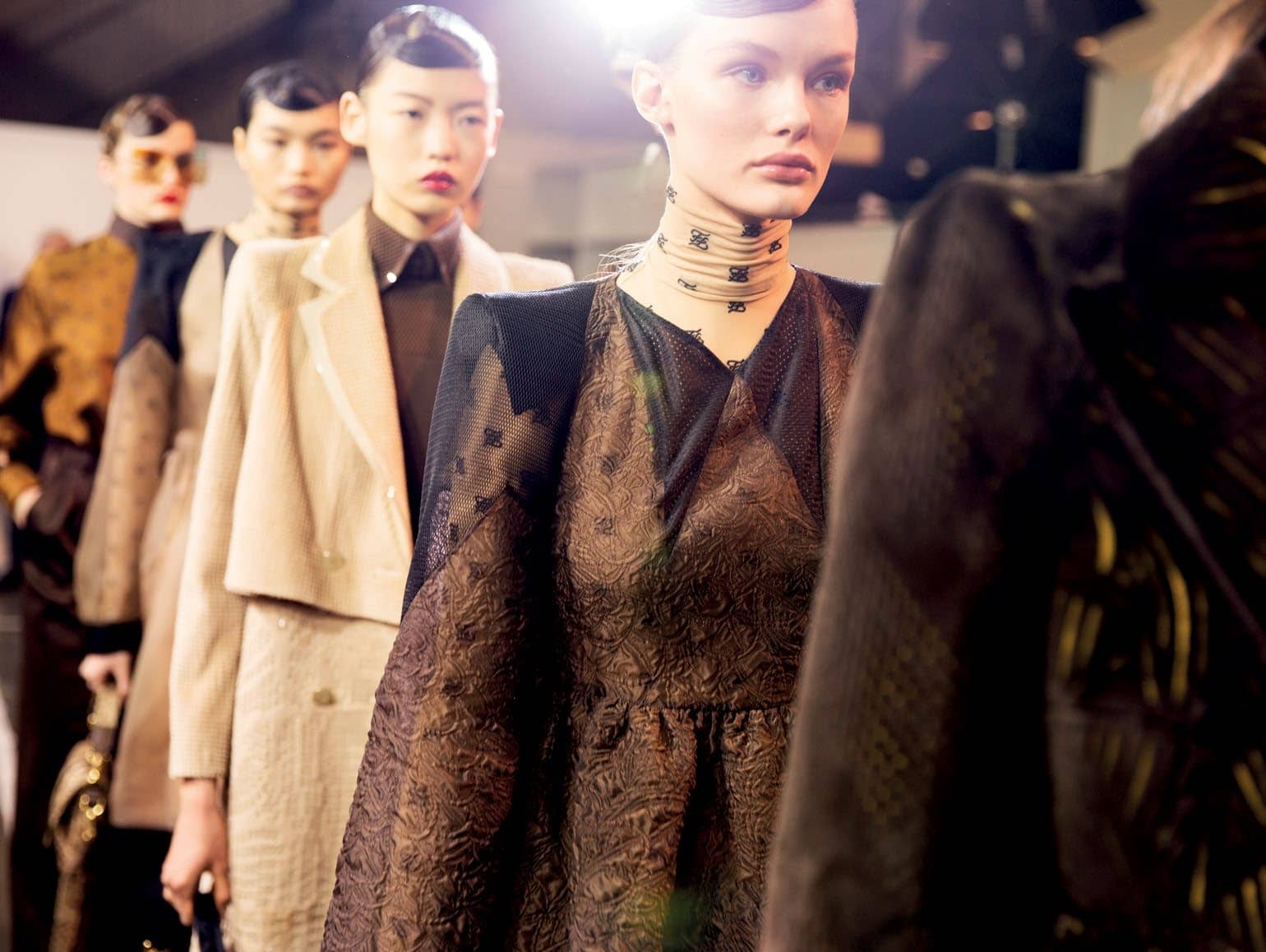 Karl Lagerfeld’s final Fendi collection was filled with plenty of the signatures he established over five decades at the Roman House. Structured pagoda shoulders, rigorous tailoring and starched high collars were all hallmarks of his precise hand, and when paired with scarlet lips, shellacked hair and A-line skirts, effortlessly evoked ’40s Hollywood glamour. Lagerfeld made the looks resonate for today by grounding them with pointy-toed boots; adding brilliant jolts of colour such as aquamarine and the iconic Fendi yellow; and layering pieces over stockings and bodysuits covered in double-F Karligraphy— guaranteed collectibles and street-style bait. Perforation, see-through layers and swishing pleats added further touches of lightness and modernity.

In less than two years, Clare Waight Keller has steered Givenchy towards an elegance that’s closer to the aristocratic spirit of its House founder. Her latest collection further reinforced this vision, starting with cinched suits featuring pronounced shoulders that were either sculpted and rounded, or padded and angular. Balancing the strict suiting were micro-pleated dresses printed with tiny florals, the flounced hems and cuffs adding a charming youthfulness to the modest silhouettes. Puffed sleeves the size of wings brought couture-level drama, but cut in crinkly taffeta and worn with trousers, Waight Keller maintained a decidedly contemporary air of effortlessness. 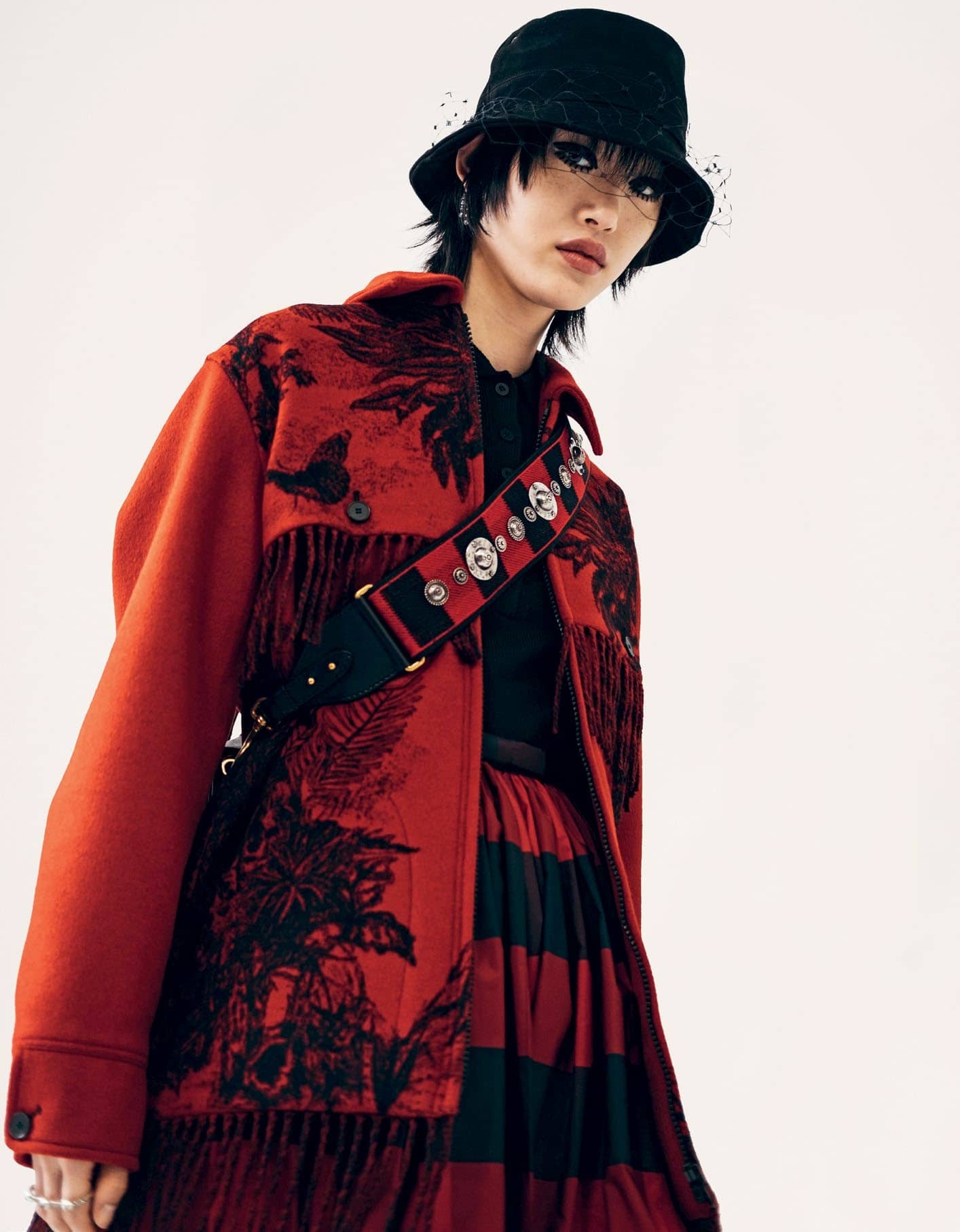 Women’s empowerment has become a key pillar of Maria Grazia Chiuri’s Dior. And she has pretty much established a formula for her ready-to-wear shows: She often works within the framework of a feminist message by an inspirational artist or author, with said message reiterated on a t-shirt, and complemented by lovely, ladylike clothes that are designed to be worn by real women with real-life needs. Hence, feminist artist Tomaso Binga’s seminal naked alphabet series lining the walls at her show and an opening look featuring the slogan “Sisterhood Is Global”, lifted from the title of activist Robin Morgan’s 1984 feminist anthology. The Dior woman continued to advance this cause in bodysuits, over which they threw soft Bar jackets or boxy buffalo-checked jackets, full skirts or sheer tulle, bustier tops or slim cashmere knits—all topped off by veiled bucket hats that marry the sporty with the sophisticated. 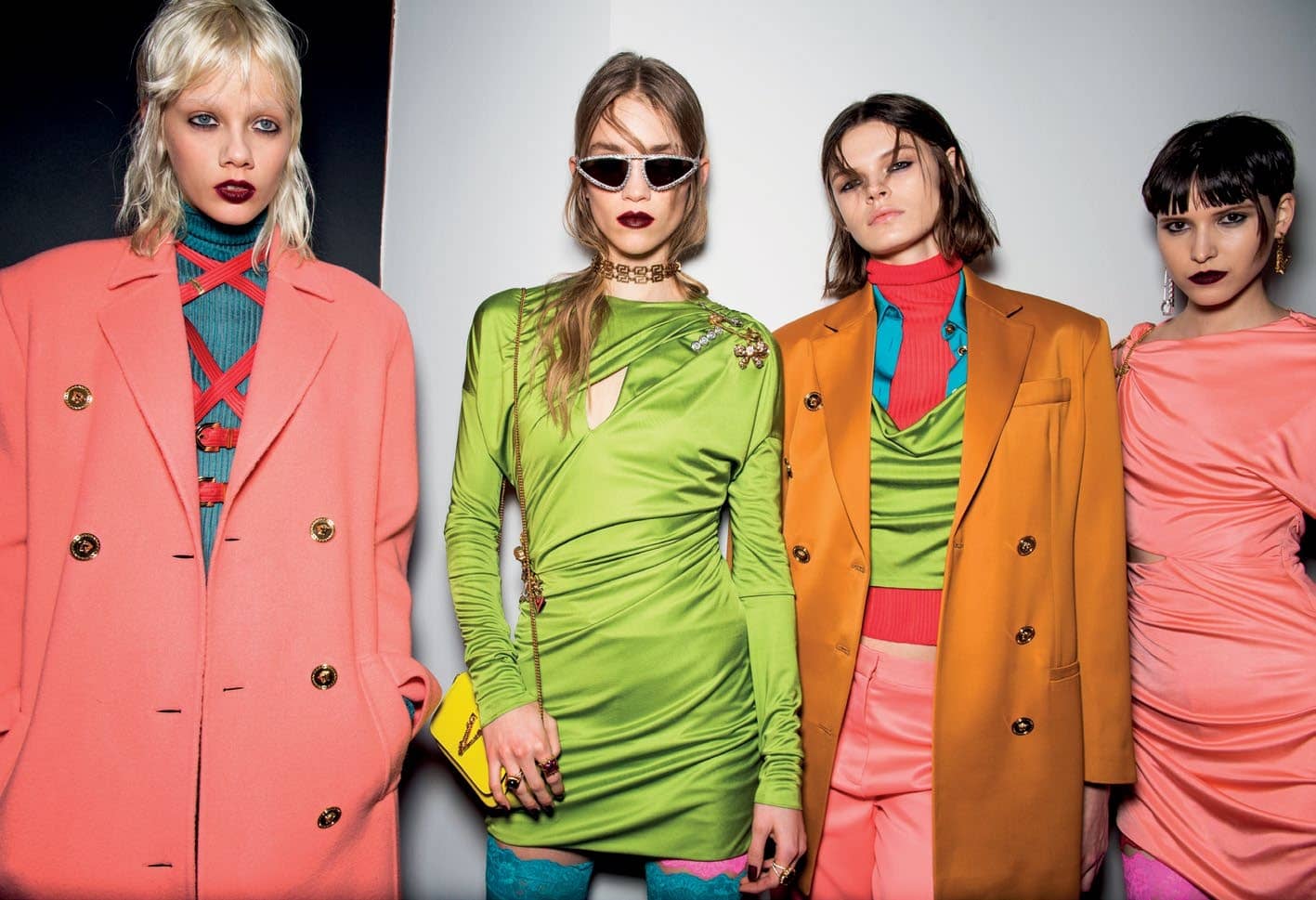 Our collective cultural nostalgia for everything ’90s has brought grunge back to the forefront of the fashion conversation, though Donatella Versace is probably the last designer you’d expect to take on the thrift-store aesthetic. Of course, with Versace being the house of gilt and glitz, Donatella’s take on grunge came underpinned with a heavy dose of glamour. There were more furs than there were flannels, and the haphazard layers of the Courtney Love look here were composed of silks and crystal mesh. Holey knits were pierced with giant gold safety-pins—an ingenious way to update a house signature and believably work it into the collection. Leather harnesses added another distinctively Versace touch. The parts of the collection that pivoted back into full-on glam—the bronze crystal mesh column, the croc-stamped slip, the slinky black gown that closed the show—were equally compelling. 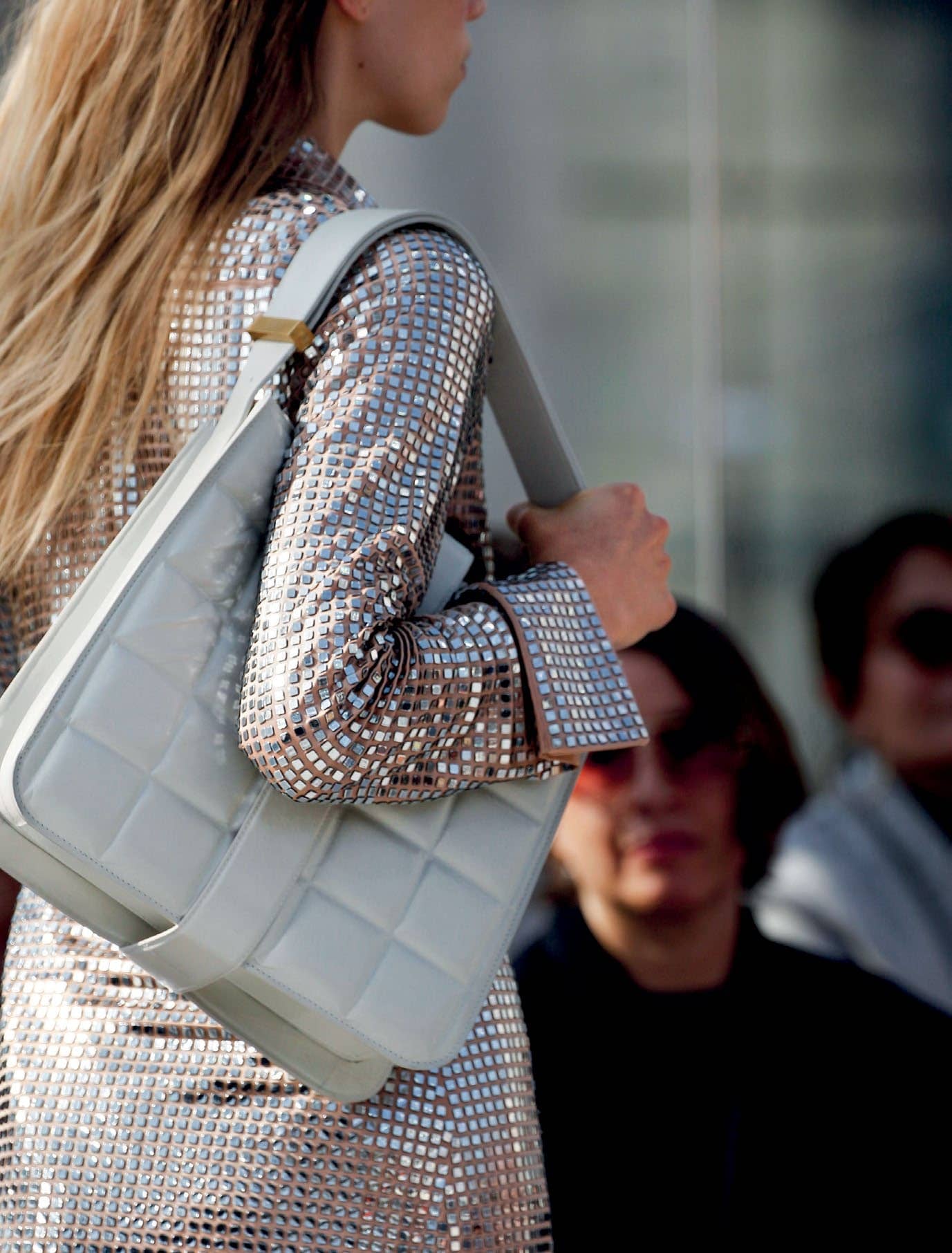 It was the most anticipated debut of the season and Daniel Lee did not disappoint. Those who expected Phoebe Philo’s former protégé to take on the mantle of old Céline were in for a pleasant surprise. Yes, there was the awkwardly proportioned (and therefore appealingly chic) footwear as well as geometric, clean-lined bags but overall, Lee brought a darker, more dynamic edge to a House that leaned towards retro under his predecessor. Still, Lee’s not a radical. His updated vision of Milanese chic was a departure from Tomas Maier’s brand of glamour but it was still respectful of the House’s heritage. The intrecciato weave of the brand’s iconic bags was blown up and transposed onto ready-to-wear. Glamour was still there in the form of leopard spots and sequins, but cut into easy daywear shapes like shirtdresses. Most compelling were the knits— artfully deconstructed, twisted and draped into alluring new forms. 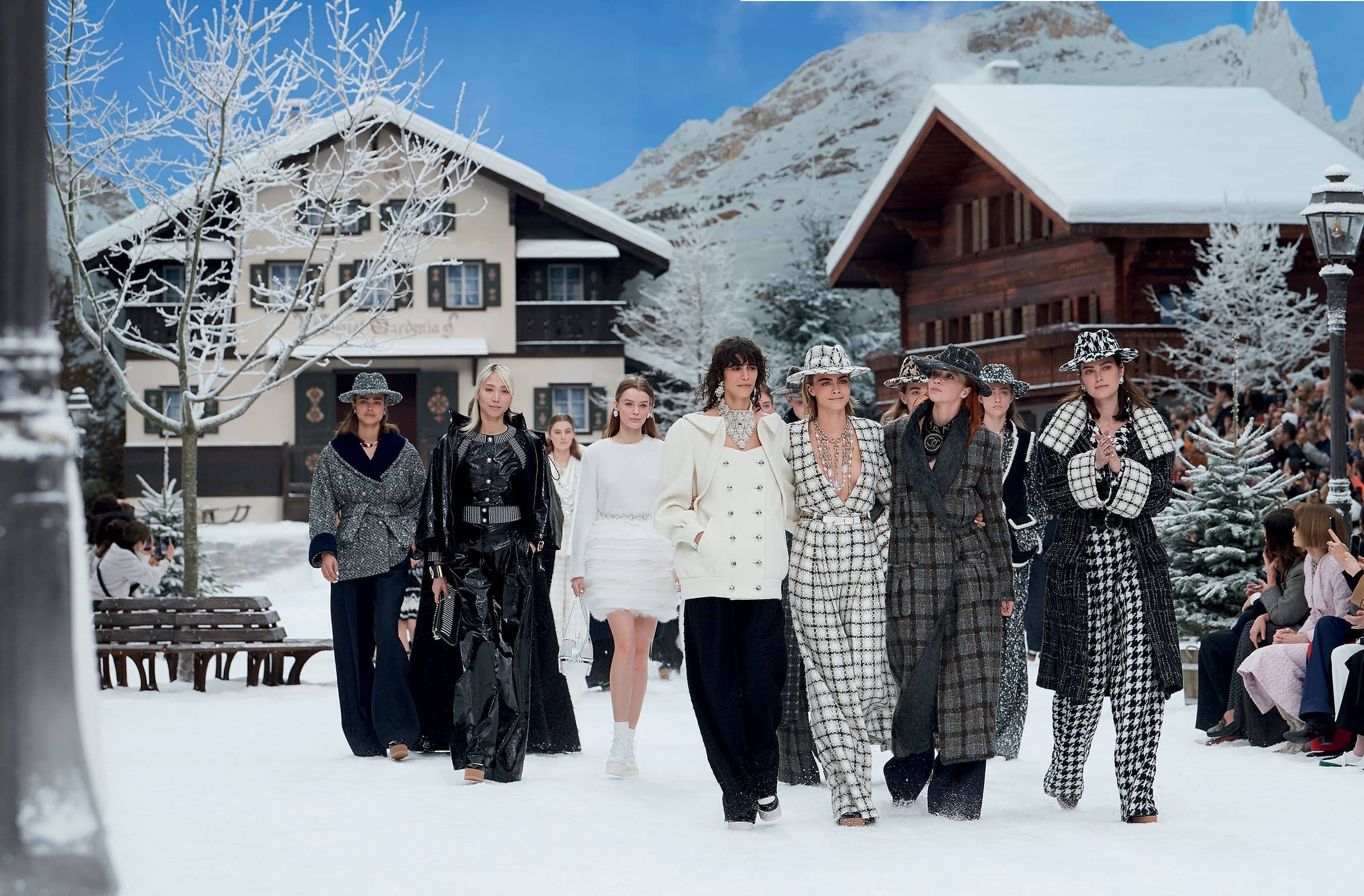 At Chanel’s first show since Karl Lagerfeld’s passing, the mood was poignant, but blended with a sense of uplift. The audience at the Grand Palais was transported to Alpine heights, seated among charming Chanel chalets, while the collection presented was a fresh, energetic take on classic Chanel codes. Opening with soft trouser suits swathed in long coats with wide lapels, it was a wintertime continuation of the easy, breezy spirit he presented at the Chanel seaside last season. Options for Chanel die-hards included: Après-ski knits, a new take on tweed (short skirts over long shorts), ruffled organza blouses, searing colours on classical skirt suits and brilliant winter whites.

This season, Burch looked to Black Mountain College and its liberal arts as a starting point. The first look out— a structured coat with gold angular toggles offset with a colour-blocked bag—set the quietly artsy tone before asymmetric knife pleats with concealed graphics, beribboned bell sleeves cuffed in velvet, patchwork trimmed with paillettes and mismatched earrings continued to amplify the poetic beauty of Burch’s artistic inspirations. A balance of structured shapes and flowing lines ensured that the visual elements complemented, rather than clashed with, one another. 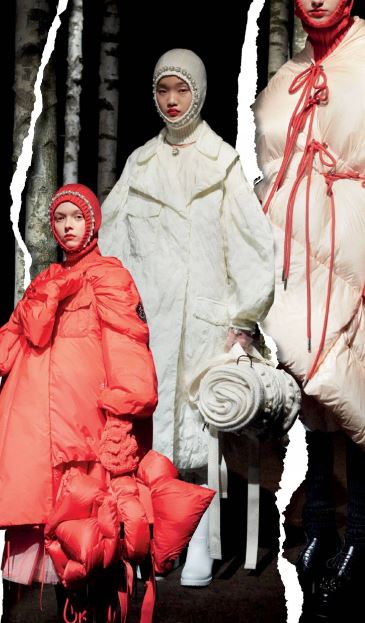 One year on, the Moncler Genius universe has expanded with new additions like Matthew Williams of 1017 Alyx 9SM and Richard Quinn. The former brought his haute streetwear edge, while the latter reinterpreted his couture shapes in the brand’s signature down. Amongst the returning collaborators, standouts include Simone Rocha, whose romantic silhouettes were both pretty and protective; Craig Green, whose inventive, sculptural creations can be flat-packed into tiny squares; and Pierpaolo Piccioli, who brought in Liya Kebede in order to enlist her Lemlem craftspeople for their brilliant patterns.