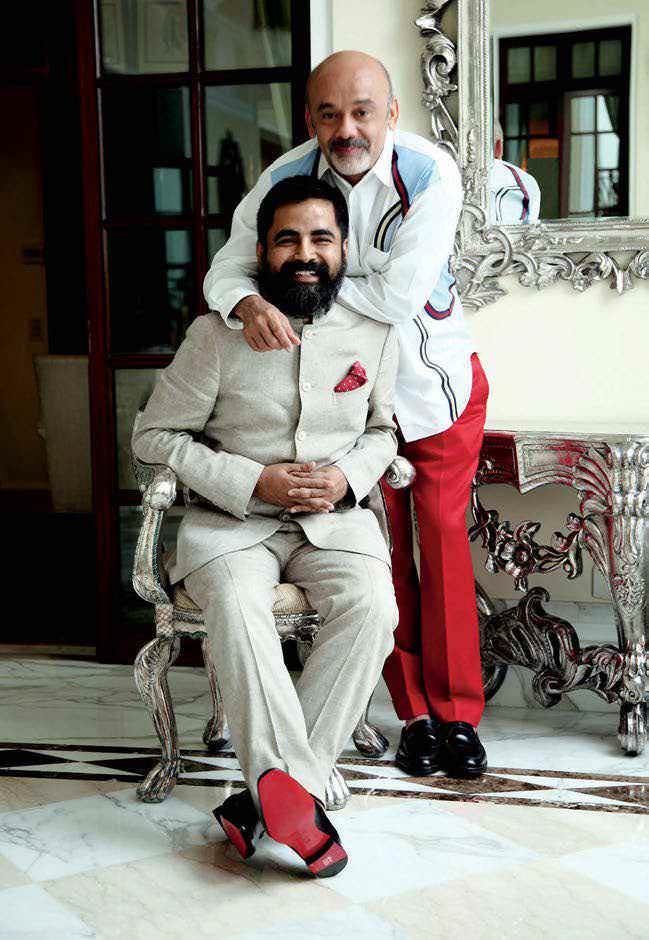 When I enter Christian Louboutin’s suite at the Imperial in Delhi — the city’s most assiduously elegant hotel — neither he nor Sabyasachi Mukherjee is there. Instead, I see women in a swirl of solid-coloured calf-length skirts, with those heels, those impossible six-inch beauties, clicking away beneath them. It was, in fact, their almost sexual flash of crimson, and their steep curves, that attracted Sabyasachi too. Louboutin later tells me that Sabyasachi had said he wanted to bring “a strong sexual element” to his collection for Amazon India Couture Week last month. He also insisted that the heels be high, high, high, despite Louboutin’s fears that the models, dressed in heavily embroidered gowns, would topple over. The heels remained vertiginous, and they too, are beautifully embroidered, with silver and bronze stitchwork on black, and leg-lengthening nude. They seem to be the perfect marriage between the two designers’ styles. How did they arrive at the final design? Was there a lot of back and forth? Not quite. “The entire collaboration got done over one lunch at the Louvre,” says Sabyasachi. “We sat there and mostly discussed food. There were no ego clashes, not one conflict. When I came back, I said, ‘That’s it?’” says Sabyasachi. “Christian and I, I don’t think we understand the word compromise.” Here, Louboutin nods, and says, simply, “No.”